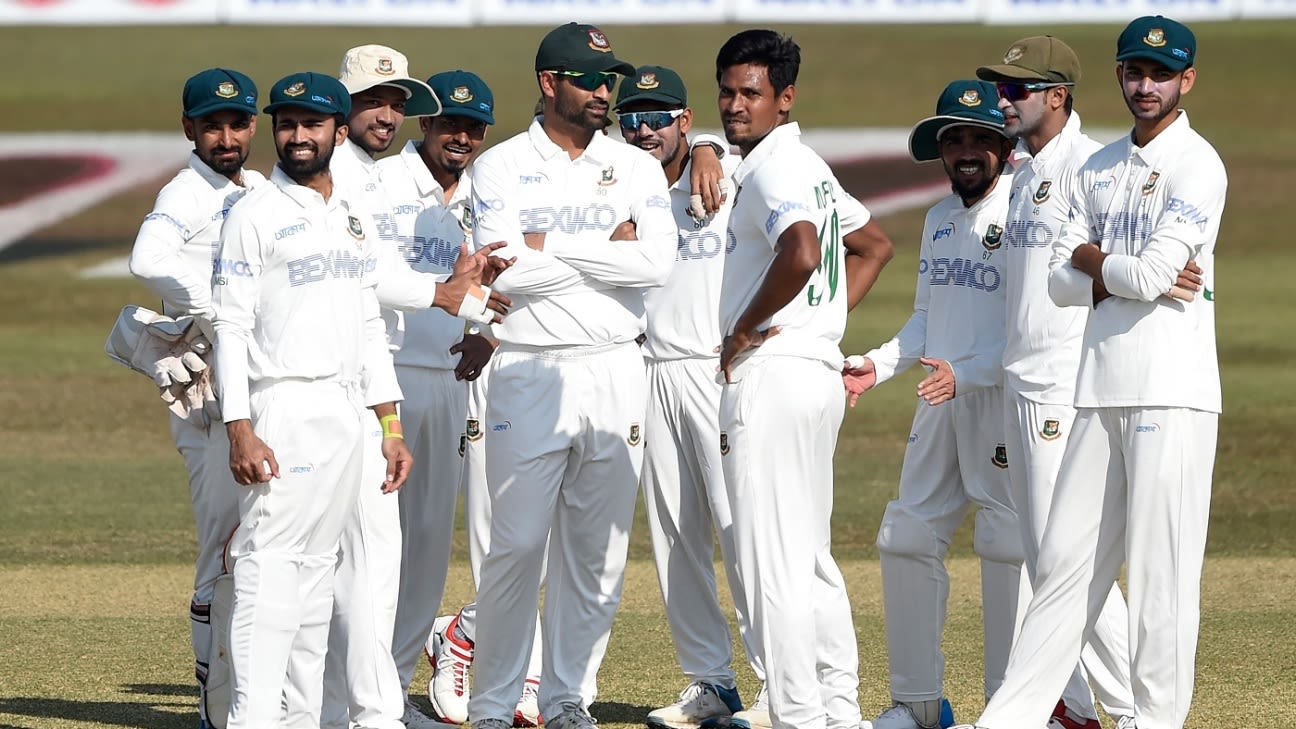 Ramifications, analysis and criticism will be the predictable aftermath of Bangladesh’s three-wicket loss against West Indies in the Chattogram Test. But at the forefront of Bangladesh failing to defend a target of 395 in the fourth innings was the lengths bowled by their spinners on the fifth day.

Nayeem Hasan, Mehidy Hasan Miraz and Taijul Islam bowled a total of 120 short of length deliveries that fetched West Indies 119 runs, including 16 fours and a six. On a day that began with survival being most crucial for the batting team – the odd ball was keeping low or bouncing sharply from a length – the loose deliveries released pressure.

Bangladesh captain Mominul Haque said that he hadn’t expected such a result, and while he didn’t blame anyone in particular, he admitted that the bowlers could have bowled better lengths.

“It is an unbelievable result,” Mominul said. “But that’s how the ball rolls sometimes. This wasn’t an expected result. Our bowlers didn’t bowl in the right areas, and their batting pair (Kyle Mayers and Nkrumah Bonner) did really well. We dominated them for four days but lost at the last hurdle. At no point did I think that we’d lose this game.

“You can’t really blame anyone in particular after a loss. A team losing means everyone has lost, and vice versa when we win. Those who bowled today are capable match-winners, but if they had bowled better lengths (we could have seen something different). Maybe we are coming back to Tests after a long time, or we lacked belief.”

It was starkly evident that Bangladesh missed Shakib Al Hasan‘s bowling, the premier allrounder not able to bowl having sustained a left thigh strain on the second day. But Shakib looked quite active on the fifth afternoon, even giving the team a pep talk before they headed out for the third session, and at times spoke to Miraz and Mominul near the boundary. Mominul said that Shakib’s presence could have meant a whole different story for his team.

“We would have bowled tighter if Shakib bhai was in the field. He is a senior bowler, who would have helped the other bowlers. We did miss his bowling but we also had Taijul, Nayeem and Miraz.

“Taijul is an experienced bowler who bowled well in this game. Miraz took eight wickets in the match and batted well too,” he said.

Bangladesh also missed four chances in total, including Mayers dropped on 49 at slip and Bonner reprieved on a stumping chance on 79. Two reviews for lbw that could have helped Bangladesh were also not taken, when Mayers was on 47 and Bonner on 25. On both occasions, replays showed the ball was hitting the stumps.

“There were enough opportunities on this pitch. We should have grabbed the chances when the bowlers were doing well. Both batsmen had lives, so if we got them out, the momentum would have certainly changed,” Mominul said.

He also praised Mayers for his outstanding innings, with the batsman unbeaten on 210 on debut. “It is the sort of pitch where it is hard to get a batsman out when he is set. He batted outstandingly. It wasn’t easy to chase almost 400 runs. He made a double-hundred in that situation.”