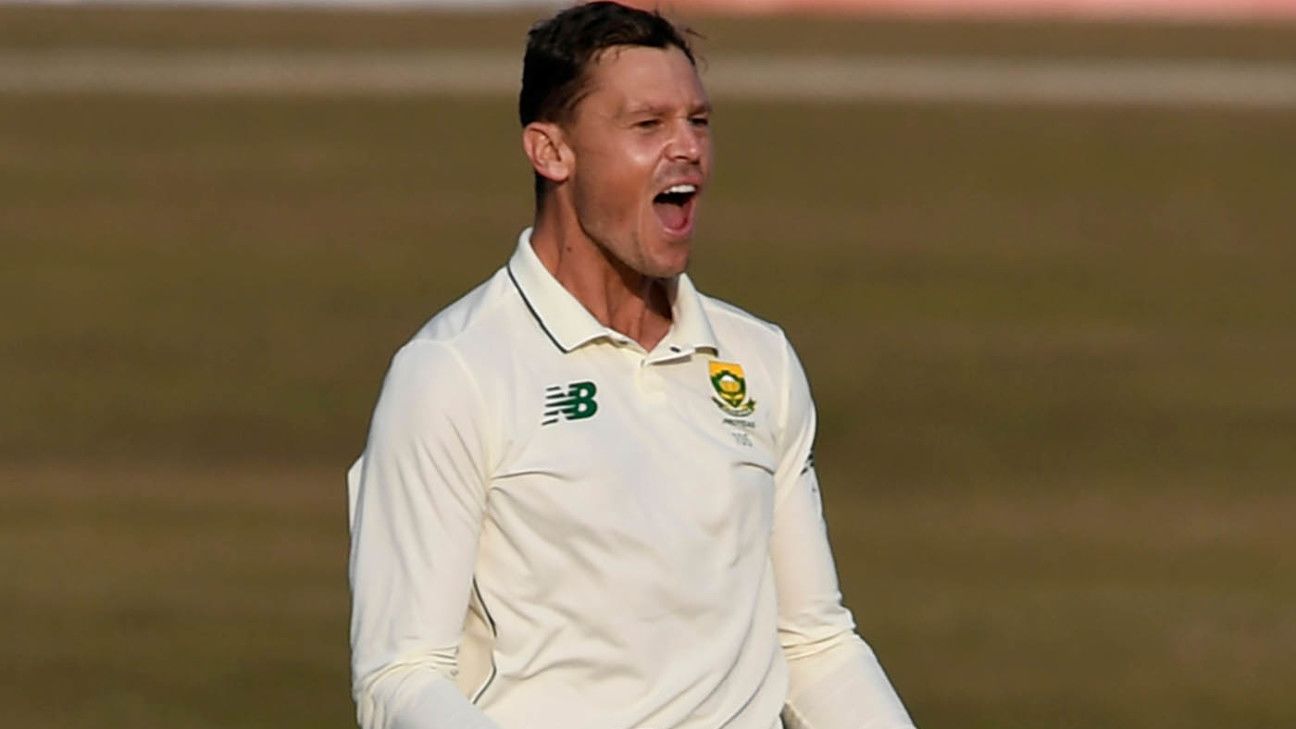 He saw bone through the skin of his little finger in the first innings, but has picked up 3 for 12 in the second so far

George Linde thought his season was over when he saw bone through the skin of his little finger while fielding in his follow through in Pakistan’s first innings during the second Test.

It was his third over, and the 23rd of the match, when Babar Azam drove the ball straight back to Linde, who reached out to stop it as it clipped his left hand and rolled away. With spots of blood visible on his whites, Linde immediately left the field, fearing the worst.

“I started running off when I saw bone sticking out and I just popped it in myself,” he said, without flinching. “I went for X-rays and for some reason my finger wasn’t broken. I was quite happy with that.”

Not just happy, but hopeful that he would still be able to play a part in the Test.

On the same day, with his finger stitched and a dressing wrapped around it, Linde was seen practising and trying to adjust his grip. The next day he returned to bowl two overs. The day after that, he made a run-a-ball 21 and bowled another nine, in which he took three wickets for 12 runs to keep South Africa in the game. He admitted he was in some pain. but not enough to keep him out of the game.

“I always say you never know when you will get another opportunity to play for your country. It’s not going to get me down, because it’s just pain. There are people who are sick at home, people who are losing their jobs, people who are dying from Covid or other diseases or something. My injury is nothing compared to that,” he said. “Yes, I’m in pain, but I’m fighting it because I’m playing for my country. I’m not going to stand back for anything just because my finger hurts a little. It hurts for ten minutes, then you get an injection and then you go on.”

Linde is playing in just his third Test match, 15 months after making his debut in India and, with all his appearances coming in the subcontinent, is justified in wondering when his next cap might come. Not only do South Africa have no more Tests scheduled this summer but the state of the FTP means their next trip to Asia is uncertain, and even home fixtures are not confirmed. When they are, Linde’s place isn’t, because South Africa tend to play one specialist spinner at home and Keshav Maharaj is their first-choice.

That means Linde has to make the most of the chances he’s been given, even if that means changing things about the the way he bowls. In this match, he has to remember a little something extra every time he prepares to deliver a ball. “I had to make a small adjustment with the grip. I didn’t even know I use my pinkie (little finger) when I bowl. It’s weird because every time I bowl, I have to first lift it up a little bit to get a better grip,” he said.

So far, so good, with Linde appearing in full control in the second innings. He accounted for the wickets of Azhar Ali, Fawad Alam and Faheem Ashraf, who he could have dismissed for a duck had Dean Elgar held on to a catch at slip.

South Africa put down three catches in total and allowed the Pakistan lead to swell to 200, but Linde doesn’t think the match has got away from them yet. “It’s quite difficult to get wickets here, especially against a good opposition. We bowled well and were maybe a bit unlucky with a couple of dropped catches,” he said. “But we are hungry to win this Test match. I’m pretty confident the batsmen will take us over the line in the next innings.”

Asked what he thinks is chaseable on a pitch with variable bounce and where reverse swing could come into play, Linde was bullish and believes South Africa could still have another hundred runs to play with. “Anything under 300, we will take. Hopefully it will be 250, or 220 or 230. I think realistically under 270 or around 300,”he said. “I am pretty confident we will chase down.”