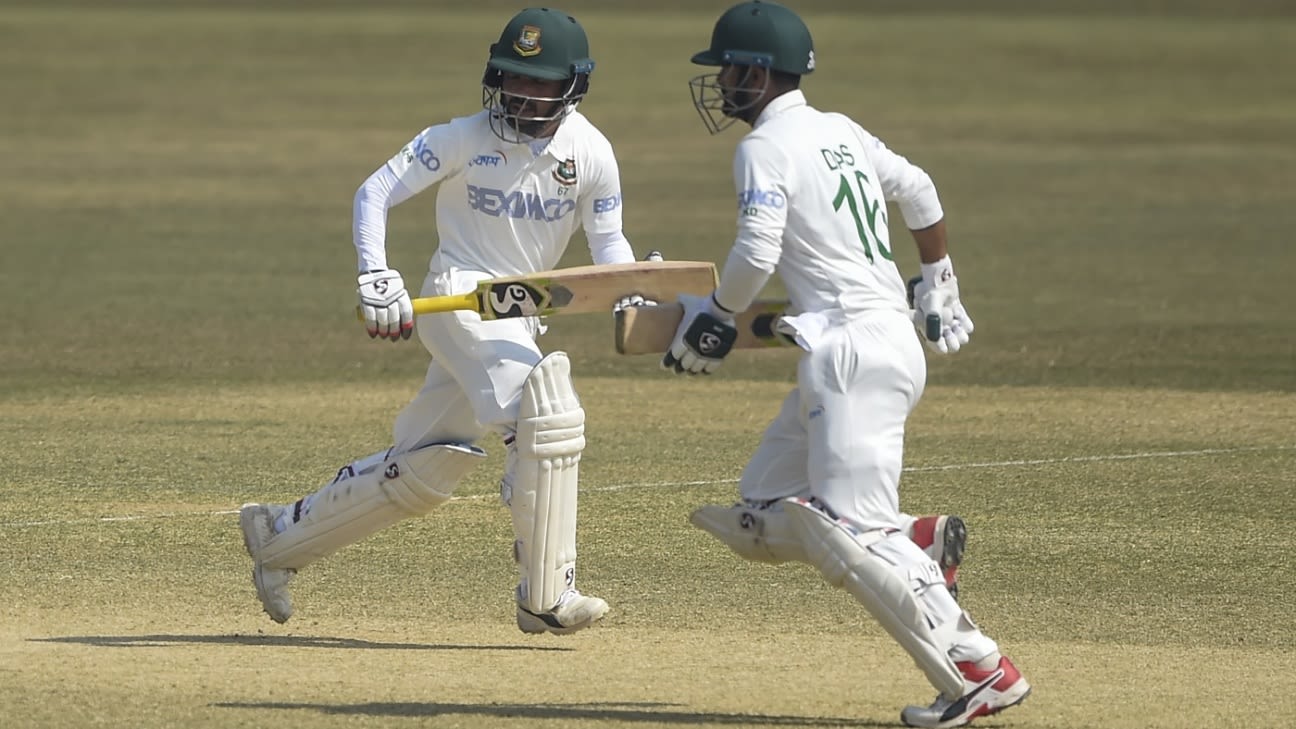 Resuming on 47 for 3, they lost just one wicket in the session and went into the lunch break with a lead of 320

Mominul Haque was eyeing his seventh Test century at Zahur Ahmed Chowdhury Stadium as an unbroken 76-run stand between him and Liton Das put Bangladesh in a commanding position at lunch on day four of the first Test. Resuming on 47 for 3, the home side lost just one wicket in the session and went into the break on 149 for 4, their lead now a daunting 320.

After coming in at 1 for 2 and being peppered by the short stuff from Shannon Gabriel on the third evening, Haque looked much more comfortable on Saturday. That, in part, also had to do with the pitch slowing down further and offering very little for fast bowlers.

Gabriel, too, realised that. While 86% of his deliveries were short last evening, he tried to mix it up today. In the first over of the day, after pushing Haque on the back foot, he bowled one full. The batsman, though, was up to it and found the boundary with a perfect on-drive. Later, when Kemar Roach tried a short ball, Haque ramped him over the vacant slip area for another four.

In general, though, both Haque and Mushfiqur Rahim preferred playing percentage cricket, dealing mostly in ones and two. Given the time left in the match, there was no need to take undue risks but one reason behind that could be Shakib Al Hasan might not be available to bat, having hurt his left thigh during West Indies’ first innings.

Rahkeem Cornwall eventually broke the 40-run stand when he trapped Rahim lbw for 18. The batsman tried to cut a ball that was too full and too close to the stumps and got rapped on the pad. The umpires allowed the review even though it seemed the batsman was late to opt for it. A potential controversy, however, was avoided when replays found Rahim out.

One baffling thing on the part of West Indies was their reluctance to turn to Jomel Warrican, especially when he was their go-to and most successful bowler in the first innings. When he was finally brought on, just before the drinks break, he immediately found turn from the surface. His fifth ball of the day pitched outside Das’ leg stump and spun past to beat the outside edge and brush the back thigh on its way to Cornwall at first slip. Soon after he drew an outside edge of Das’ bat but this time the ball fell short of Cornwall.

Seeing Warrican getting help, Kraigg Brathwaite deployed legspinner Nkrumah Bonner from the other end but he lacked control, and Haque took him for two fours in his first over. He then collected another four off Warrican to take the lead past 300.

After lunch, West Indies may just focus on restricting the runs in order to delay the declaration as much as possible.