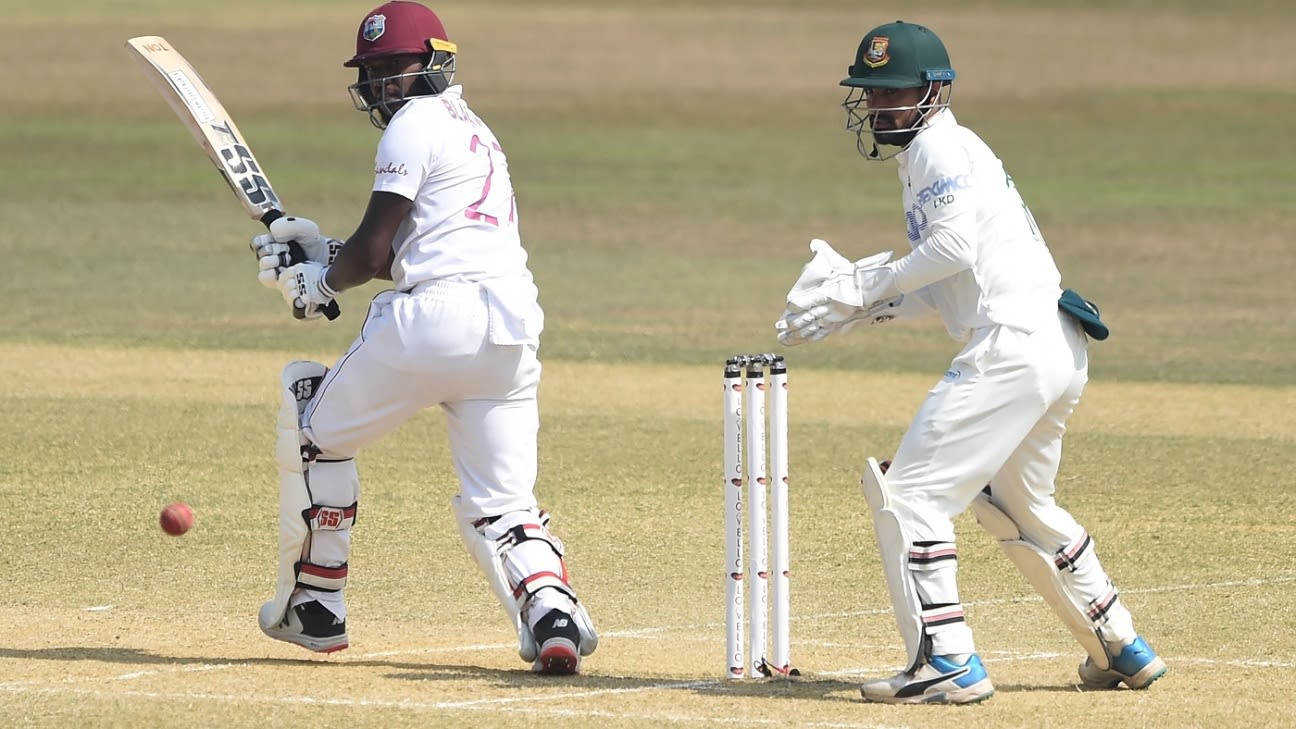 West Indies believe that bowling out Bangladesh cheaply on the fourth day could get them to a stronger position later in the first Test in Chattogram. It would certainly the shift focus of the game towards their fourth-innings chase, away from their second-day batting meltdown when they lost their last five wickets for just six runs, in the space of 23 deliveries.

Their in-form batsman Jermaine Blackwood was upset with the way he got out – edging one to the wicketkeeper down the leg side – as it thwarted his plan to convert more of his fifties into hundreds, but said his partnership with Joshua Da Silva was going well, with an approach he had asked the younger batsman to follow.

“It was very frustrating,” Blackwood said of his dismissal. “I really wanted to convert more of these half-centuries into centuries. I am stepping into the right direction. But I was very disappointed at the way I got out. Next innings I have to hold down my head and bat in the same fashion. I wasn’t shocked. I was very disappointed. I knew I hit the ball. Jimbo (Rahkeem Cornwall) was telling me to probably take it (review).”

“I was just telling Josh to keep it simple, take it one ball at a time. Just stay positive as well. Once they bowled a bad delivery, we wanted to capitalise. When they bowled a good delivery, we want to be very defensive, and just look aggressive defending, playing back and leaving alone. I think me and Josh put on a very decent partnership.”

The trouble started shortly before the tea interval on the third day when Da Silva and Blackwood, having added 99 for the sixth wicket, fell to innocuous deliveries. Da Silva edged a low, short ball from Nayeem Hasan to wicketkeeper Liton Das on 42, and in the following over, Blackwood, on 68, tickled Mehidy Hasan Miraz down the leg side, also to be caught by Das.

When the teams came back after the tea interval, West Indies’ tail caved in the following 18 balls to slump from 253 for 5 to 259 all out.

Blackwood said they knew that the pitches would be very different than the ones they had played on in England and New Zealand last year. He added that tackling deliveries off the front foot but without pressing too hard is crucial to scoring runs in Bangladesh. “We came from England and New Zealand, where the conditions were pretty similar. The ball was bouncing and seaming around,” Blackwood said. “There wasn’t too much spin. But here in Bangladesh we knew we were going to get a lot of spin.

“The ball is spinning a lot and keeping low. We just have to play off the front foot and as much late as possible. If you don’t lunge at the ball, I think you’d be very successful. Then, you have to capitalise on the bad deliveries whenever you get a chance to score.”

Blackwood also mentioned that it was important for him to get a good score since he hadn’t done well in the practice game last week, having been the side’s most in-form batsman during the last two Test series. “You have to be confident as a player because I didn’t score any runs in the practice game. Still you must have the mental toughness. I know that I am not good in playing practice games, but once the Test cricket starts I am 100% ready.”

Despite the lacklustre ending to their batting, West Indies came back strongly with the ball, with offspinner Rahkeem Cornwall taking two wickets in his first over. Later, Shannon Gabriel too got into the act by removing Shadman Islam with a piercing short ball.

Blackwood said that Gabriel’s aggression and Cornwall’s stump-to-stump line kept the batsmen under pressure. “I think it was great [how they bowled]. Shannon was running in, putting his heart and soul into it on these flat surfaces,” he said.

“He was bowling pretty quick and aggressive, and you can see that he got the rewards. Hopefully, tomorrow he can do the same thing. I think Jimbo bowled brilliantly as well. He made the batsman play, and if he can do it tomorrow, he can get a lot of rewards.”

Blackwood said they were confident of chasing down a decent total as there were “hungry” batsmen in their line-up. “We have to take it hour by hour, session by session,” he said. “Once it comes down to that, the guys are very much up to it. I know Kraigg [Brathwaite], John Campbell and [Nkrumah] Bonner are hungry for runs.

“I know the guys like [Kyle] Mayers and [Shayne] Moseley want to get some runs under their belt as well. Once the opportunity presents itself to win, we will certainly go for it.”