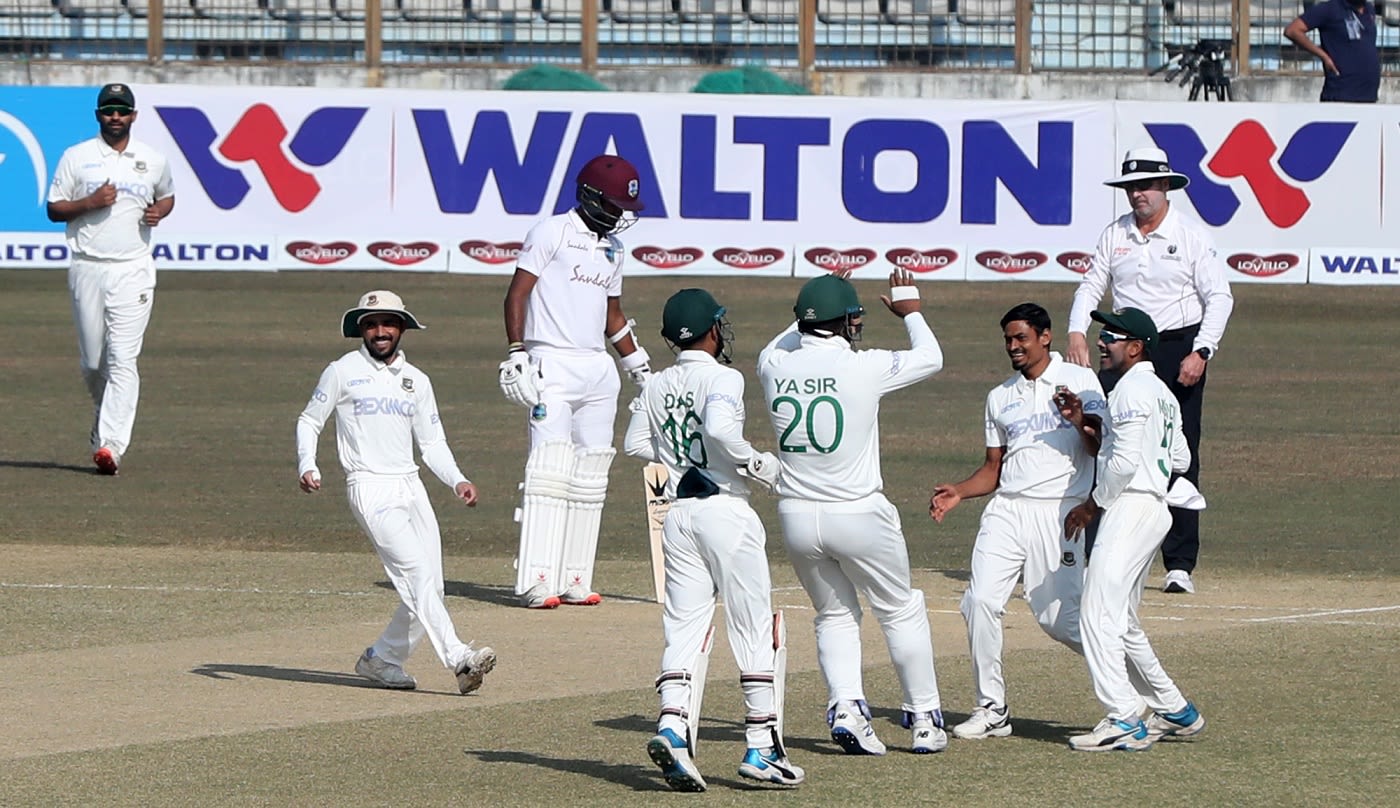 Taijul Islam was critical of the way Bangladesh’s spinners – including himself – bowled for most of the first and second sessions of the third day of the Chattogram Test. And even though they now have a lead of 218 runs, the left-armer went so far as to say a repeat of such a performance could hamper their push for victory against the West Indies.

Taijul became the senior bowler for the home side with Shakib Al Hasan out injured, but even he admitted that his bowling didn’t live up to expectations.

Shakib walked off the field on the second afternoon after sending down six overs. The BCB later said that Shakib had strained his left thigh while trying to stop a ball off his own bowling and that he was being carefully monitored.

But with three spinners already in the playing XI, Bangladesh had most of their bases covered. Taijul himself took a wicket off the first ball of the day, but thereafter Kraigg Brathwaite‘s counter-attacking style put them off for a little while, and despite taking two more wickets in the first session, they conceded runs at 3.45 per over, a higher rate than most sessions in the game. West Indies continued to recover in the day’s middle session through a 99-run sixth wicket stand between Jermaine Blackwood and Joshua Da Silva.

“I don’t think I bowled up to the responsibility on me,” Taijul said. “I had a bad first session, but we recovered well later. We made a comeback later in the second session. We have to say that the wicket is favouring spinners. We started well this morning but none of the spinners could continue in the same vein. We didn’t bowl in the right areas.

“I think if the spinners bowled better in the first session, we may have had a better result. I think one of the reason could be our long break from Test cricket, but these things happen in cricket.”

But once the Blackwood-Da Silva partnership was broken, Bangladesh shot back into the game with three more wickets.

“When we bowled poorly in the first session, we planned to force them into taking risks,” Taijul said. “Thankfully at one point we got the breakthrough but this is how Test cricket is. There will be long periods when you will wait for wickets but when it does arrive, a few more follows.”

Taijul hoped that Bangladesh are able to set a target of 300 or more even though the pitch is starting to show signs that suggest batting in the fourth innings won’t be so straightforward.

“I think 250 is good enough on this wicket, but if we bowl like we did in the first session, it will be difficult for us. We have to bowl well, like we did later in the day. I think we have to give them a target of 300-350.

“I think it is natural for the wicket to deteriorate on the fourth day, based on what we saw today. I think if the spinners can bowl well, they will have more favours from this wicket.”

Meanwhile, a noticeable factor in Taijul’s bowling was his going back to his old action. During the BCB President’s Cup in October, Taijul was seen bowling with a more side-on action with a higher non-bowling arm, but he said that when he realised that the new action wasn’t paying dividends, he returned to his old one.

“I had reasons for wanting to change my action, and similarly I know why I returned to my old action. I have worked on developing a new action, but there’s a difference between a natural action and one that’s developed. When I saw that results weren’t in my favour, I went back to my old action,” Taijul said.