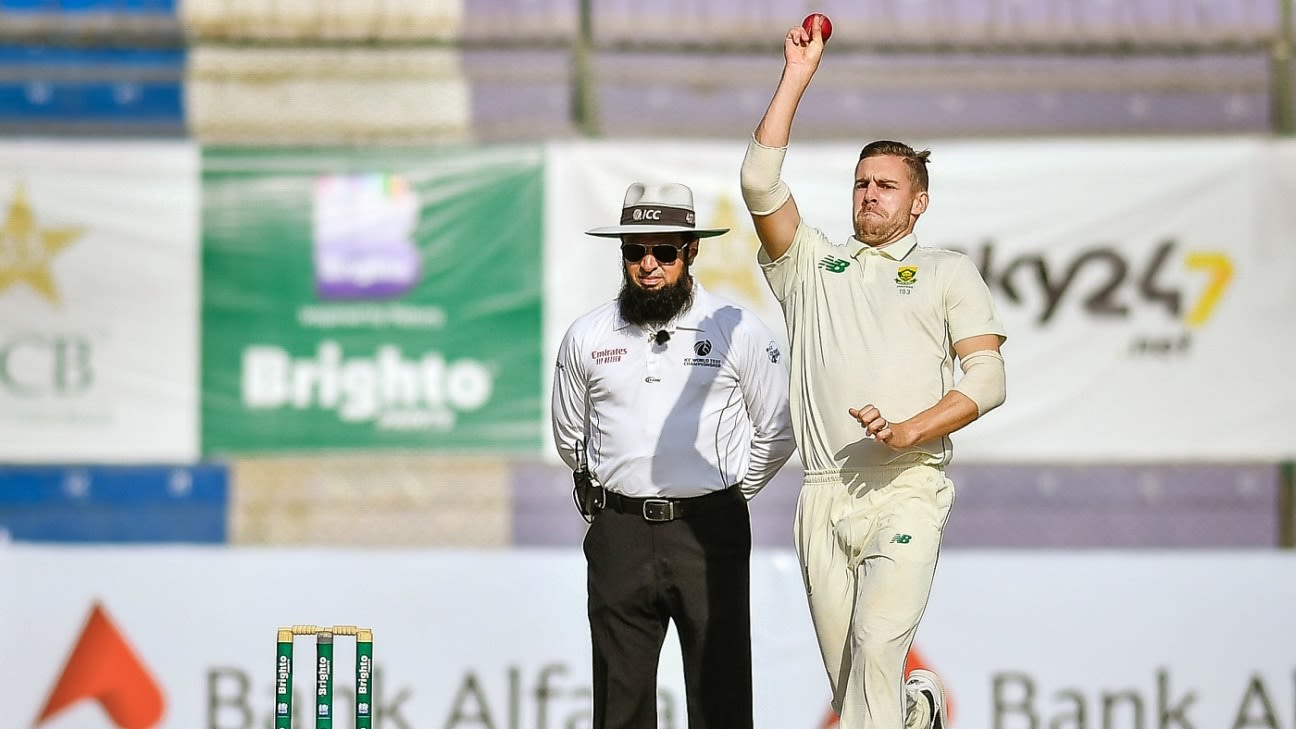 He’s known for his high speeds and effective bouncers, but in the second Test, he also showed good discipline

The trick to being a successful fast bowler in the subcontinent is not just express pace and good intent, but also to work with straighter angles. That’s what Anrich Nortje, who made his debut in India and took his first five-for away from home in Rawalpindi in his 10th Test match, has learned.

“At home, if you run in hard, bowl fast and get the ball in the right areas, you’ve already sort of taken a wicket a lot of the time. But, particularly in the last while, I try to keep my angles – even where I start running from – as straight as possible. That’s helped me a lot, particularly in the subcontinent,” Nortje said after the second day’s play of the second Test against Pakistan. “Sometimes, when I go a bit wider, because there’s not a lot of bounce here, it’s an easy cut shot most of the time. In South Africa you’re trying to get into that channel. Here you’re trying to hit the stumps most of the time, and you also don’t want to be bowling on leg stump. It’s one thing I’ve focused on a lot.”

Nortje has become known for consistently bowling in the upper 140s and for using the bouncer to good effect, but in this innings he also showed his ability not to veer wide outside off or down leg. It helped that he could operate in short spells – he bowled six in total of which only two consisted of five overs each – and could give each delivery his all.

“We had a chat about the energy of the fast bowlers and trying to create something in our spells – to not bowl too long and when we do come on try and create something,” Nortje said. “That’s what happened in this game. We didn’t bowl long spells and we tried to dig it in as much as possible and hit the wicket as much as possible. That was the plan, to bowl short spells and try to have as much energy as you can.”

“In South Africa you’re trying to get into that channel. Here you’re trying to hit the stumps most of the time, and you also don’t want to be bowling on leg stump. It’s one thing I’ve focused on a lot.”

That may make it sound like all was nothing but hard work, but Nortje confirmed there is some assistance for the seamers in Rawalpindi, and definitely more than there was in the first Test in Karachi. “With the hard ball there is some bounce,” he said. “I don’t think the fast bowlers will be completely out of it, I think there might be different opportunities and different ways of taking wickets like we saw the ball keeping low, so that might come into it.”

Still, to prosper on the subcontinent for a South African quick is something special. For previous bowlers, like Dale Steyn, who took two of his first three five-fors in Sri Lanka and Pakistan respectively, it signalled a coming-of-age and an ability to adjust to unfamiliar terrain and still have a decisive say. “Getting a performance in the subcontinent definitely means a lot,” Nortje said. Hopefully I can just grow as a fast bowler.”

At 27, Nortje is older than the then-24-year-old Steyn was when he took 5 for 56 to bowl South Africa to victory in Lahore in 2007, and he also occupies a more senior role in the transitioning Test side. After Kagiso Rabada, Nortje is the second-most capped Test bowler in the squad and he has become a go-to for Quinton de Kock when matters are meandering and he needs to make something happen.

In Karachi, it didn’t work and Pakistan’s last four-wickets put on 202. In Rawalpindi, it did, and Nortje plucked the last two wickets in three balls to keep Pakistan to under 275, although the last five wickets added 123 between them. Does he think the South African attack lets tails, and the Pakistan one in particular, get too far ahead? “I don’t think it’s become a problem,” he said.

“In the previous game they had a lot of partnerships. It’s not something we can really control. Our energy, line and lengths are the controllables and are doing our best when we do get a sniff to try and make an impact. We bowled well and even if we didn’t get the wickets, to control the rate was really good. We’ve restricted them to a good total. It’s manageable for us to exceed their score. By no means do I think they got too much.”