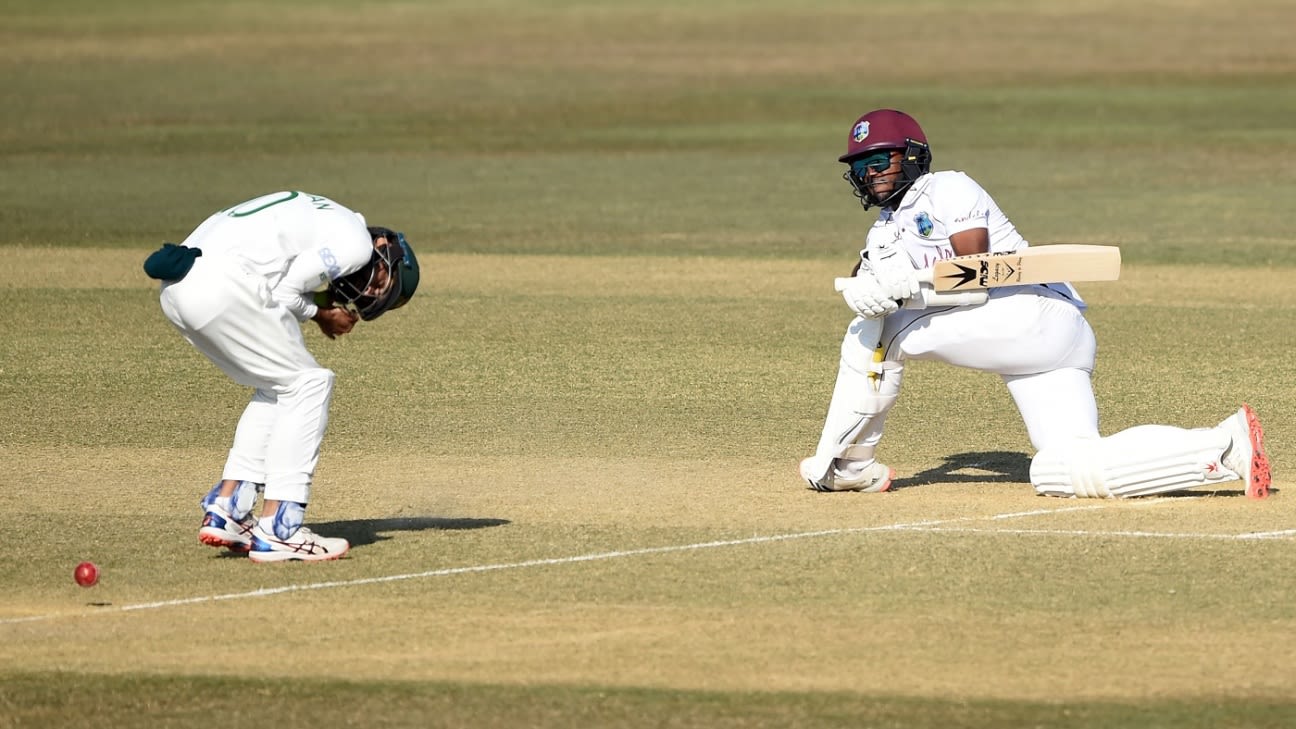 An attacking partnership between captain Kraigg Brathwaite (76) and debutant Kyle Mayers (40) headlined the first session of the third day of the first Test between Bangladesh and West Indies. However, the Bangladesh spinners, hampered as they are by the absence of Shakib Al Hasan, struck crucial blows to keep Bangladesh ahead at lunch.

Nevertheless, West Indies will draw confidence from the fact that they added 114 runs in the two hours of play, and still have five wickets in hand, to chip away at the Bangladesh total. Jermaine Blackwood (34*) grew in confidence after a shaky start, though he did see one Mehidy Hasan Miraz delivery ahead of lunch bounce a bit extra and take an edge, but land safely on the on side. Joshua Da Silva (12*) also survived an unusual shout for a dismissal, where a Taijul Islam delivery beat his bat, and grazed just past the off stump, and Bangladesh burnt a review of theirs.

The day couldn’t have begun better for the hosts, with Islam drawing Nkrumah Bonner forward with a teasing delivery on a length around off with his first ball, and drawing an edge for Najmul Hossain Shanto to take a sharp catch to his left. New man Mayers could also have been dismissed in an identical fashion off the third ball he faced, but his edge appeared to take a little deflection off Liton Das’ pads, and Shanto failed to grab on after getting his fingertips to the ball, as it flew to his left.

Mayers would settle down and crunch a couple of pleasing boundaries off Mustafizur Rahman‘s first over of the morning, an on drive and a cover drive, to settle West Indies’ nerves. Brathwaite would then bring up his 20th Test fifty with a neat flick off his hips against Islam. Brathwaite and Mayers would then press on to add 55 from a little over 11 overs, dominating the first hour of play, especially with their strokeplay square of the wicket on either side. Brathwaite used his feet cleverly against Islam and Nayeem Hasan, who replaced Rahman quite early, and his sashays down the pitch forced the spinners to drop short more often. Runs were coming at a fair tick for West Indies, though Mayers was lucky that Bangladesh chose not to review an lbw appeal when Hasan bowled one fuller, and the left-hand batsman had the ball hit pad ahead of bat with a forward press. The replays indicated that the ball would have gone on to hit the top of off.

Hasan wouldn’t have to wait long for his reward, though, with Brathwaite leaving a length ball that pitched outside off and surprised him with the amount of turn back into him, clipping the top of off. Blackwood, who followed, was beaten by a similar ball into the third delivery he faced, but the fine edge carried the ball between Das’ legs and ran away towards long stop.

The key difference between Hasan and Islam had been how much the offspinner was willing to pitch the ball further up, and that recipe was replicated by Thursday’s hero Mehidy to good effect in his first over. His last ball drew Mayers forward, and struck him on the pad after straightening from around the wicket, and the debutant walked away after considering a review. The replays, though, indicated that there may have been bat on the ball before it struck the pad, and a review could have kept Mayers on course for a fifty on debut.

The pitch, though it is offering more turn, still appears to be a benign one, and some application can bring runs, as the morning session suggested. It would appear to be a test of this West Indies team’s mental fortitude to bat through the rest of the day, if they want to make a contest of this match.

Starc: I have a pretty good relationship with Langer
Cummins does not want to lose Australia’s realistic chance at WTC final (once again)
Ibrahim Zadran’s record-breaking 162 helps Afghanistan pile up 313 for 8
Afghanistan opt to bat; Dhananjaya Lakshan in for Sri Lanka
West Indies opt to play for draw on final-day tussle