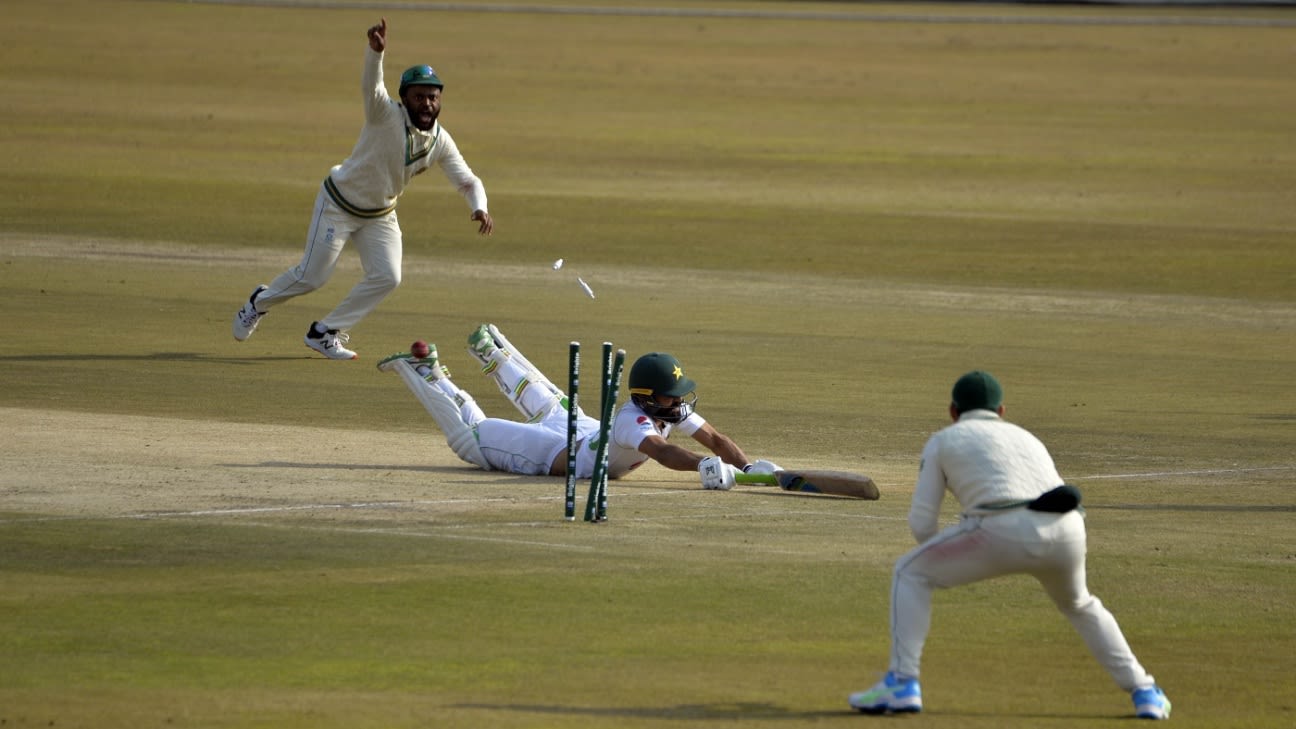 South Africa took two wickets in the first six overs, a third with the second new ball and a fourth within ten minutes of lunch to keep Pakistan in check on a lively extended morning in Rawalpindi. In contrast to the opening day, where the ball turned significantly, there was some assistance for the quicks, but only for those willing to run in hard and bend the back.

In the South African attack, that was Anrich Nortje, who made the breakthrough when he had Babar Azam caught at second slip with the second ball of the day. Azam looked to cut a length ball but got a thick outside edge and Faf du Plessis took the chance at head height. This was the second time Azam had been dismissed without adding to his overnight score in Rawalpindi – he was on 143 against Bangladesh last February when the same thing had happened, and it was also the first time in three Test innings at this venue that the Pakistan captain had not scored a century.

But Azam was not the victim of the most spectacular piece of fielding in the morning session. That was the fate of Fawad Alam, who added three to his first-day 42 before being run-out at the non-striker’s end by a direct hit from Temba Bavuma. Fawad nudged a Kagiso Rabada delivery to the off side, where Bavuma swooped in from point, picked up and threw in one motion and beat Alam’s dive in a scene reminiscent of his run-out of David Warner in 2016. Alam could only nod his head in appreciation of Bavuma’s efforts and walk off.

With two new batsmen, Mohammad Rizwan and Faheem Ashraf, at the crease, South Africa looked to apply pressure with their frontline seamers, but Ashraf was confident on the drive and pull and with the second new ball looming, Quinton de Kock turned to Wiaan Mulder and Keshav Maharaj. Mulder struggled to make anything happen, suggesting that unless a bowler has express pace or the ability to exploit reverse swing, this surface could be hard work for them – he may be used mainly as a stopgap especially if South Africa’s other specialist spinner, George Linde’s participation is limited.

Linde left the field in the 23rd over of the first day with a laceration to his left little finger and returned with strapping in the 77th over. He bowled two overs, then left again.

By the time Linde needed more treatment, South Africa were able to take the second new ball, two deliveries into the 81st over. Rizwan promptly used it to steer Nortje past gully for four but his fun didn’t last. Nortje sent down a short ball in his next over and Rizwan top-edged a pull to Rabada at fine leg.

South Africa would have been happy with that but were left even more pleased when Maharaj, who was given the second new ball when it was less than five overs old, prised out one more. He had Hasan Ali caught at slip with a delivery that turned, bounced and took the shoulder of the bat on its way to Dean Elgar.

Ashraf has since brought up a half-century – he got there with a stunning drive off Rabada, who appeared down on pace throughout the morning. Ashraf’s aggressive approach, and memories of how Pakistan defied South Africa in Karachi, where their last four partnerships put on 202 runs, mean the hosts are still in it and the Test is interestingly poised ahead of a longer lunch for Friday prayers.