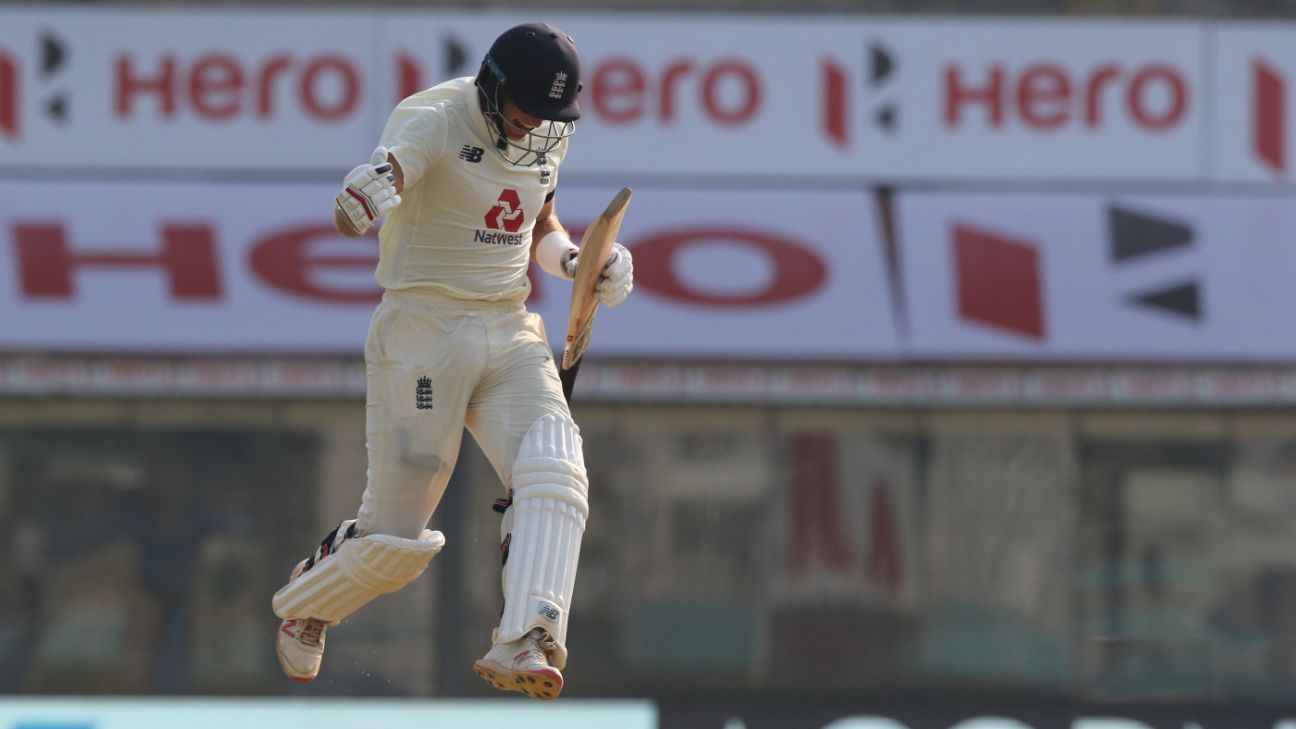 After marking his 100th Test with a brilliant first-day century, Joe Root has challenged his England team to build on a golden opportunity in the first Test in Chennai, and target a score of “600-700” to really turn the screw on India.

Speaking at the close of an emotional day, Root admitted he had felt the significance of his personal milestone more than he had anticipated; thanks in part to a surprise tribute from his team-mates, including a video of good wishes from every living England cricketer to have reached 100 Tests, as well as what he described as “some really kind words” from his vice-captain, Ben Stokes.

But by the close, Root had brushed aside such sentiment to rack up an unbeaten 128 – his third century in as many Tests following two in Sri Lanka last month – to lay England’s platform in a 200-run partnership with the steadfast Dom Sibley, who was pinned lbw for 87 from what turned out to be the final ball of the day.

“Yeah, it’s very special,” Root said. “Last night the guys put a little surprise together for me – some videos from some past players, and friends and family. And Ben, in particular, stood up and said some really kind words.

“What he said should stay between the two of us and the group, but Ben’s a fine human being and it was really nice of him to go out of his way to say some very special things that I will hold dear forever. The guys have made it very special for me and I really appreciate it. It’s been an amazing two days.

“I was a little bit emotional [at the toss],” Root added. “I couldn’t even remember our team when they asked me about it. I was a little bit all over the place, but thankfully when I got out there, I knew it was business as normal and I had a job to do.

“For us to start this series in the way that we have, it couldn’t have gone any better, bar a little blip at the end there. So I really hope that we can build on that tomorrow and I’m obviously delighted with how things have gone personally.”

Root, however, was not about to get carried away by either his or England’s start, and he had two very good prior reasons to remain cautious. On England’s last tour of India in 2016-17, he posted a near-identical score on the first day of the series – 124 in Rajkot – only for India to hold out for a draw, and on their most recent visit to Chennai – the last Test of that same series – their first-innings 477 proved powerless to prevent an innings defeat, as India responded with a massive 759 for 7 declared.

“We’ve got to look to try and get as many as we can – 600, 700 if we can, really try and make the most of the first innings while it’s good,” Root said. “Those footholes are starting to wear quite quickly. So, if we can bat the whole of tomorrow and maybe into day three, then things could speed up quite quickly for us and you never know what can happen from that point onwards.

“But ultimately we’ve got to try and back up today,” he added. “It’s been a really impressive start to things. But we’ve got to make it count and that’s going to be the challenge for this team. We’ve said we need to make first-innings runs, we’ve said we need to bat long periods of time in these conditions. Can we go and do it? That’s all the focus will be on going into tomorrow.”

Root himself could scarcely be in a better frame of mind for going big. His 20th Test century followed on from two massive scores of 228 and 186 in Galle, and took his runs tally for 2021 to an imposing 554. The only factor that has consistently challenged him in the heat and humidity of South Asia has been cramp towards the end of his lengthy stays, and that was the case once again in this innings, as Virat Kohli stepped forward to help him stretch it off in the closing overs of the day.

“I’ll be ready for more tomorrow,” Root insisted. “It was a bit frustrating, but it was very kind of Virat to help me out, good sportsmanship from him as you’d expect. It was just quite a long day. I’m going to have to fuel up well tonight, get some fluids and food on board and sleep well.”

Nevertheless, Root’s serenity – particularly once he had gauged the steeper bounce being extracted by India’s bowlers, compared to the lateral threat posed by those in Sri Lanka – was a tribute to the work he has put in during lockdown. This, he said, had included technical tweaks in the nets, as well as a heightened focus on fitness, with his investment in a Peleton exercise bike designed to strengthen his legs and backside, alongside a training regime to support his occasionally troublesome back.

“I certainly feel like I’m in some good form and I need to make sure I cash in on it,” Root said. “Over the course of my career, I’ve not always gone on and made really big scores, so to be doing that currently is really pleasing. If I keep getting myself in positions to make big hundreds, then I’ve got to keep taking them and we’re going to win more games.

“I’ve worked on a few technical things in a few areas of my game,” he added. “I’ve looked at certain trends of how I was getting out at certain times of my innings and tried to eradicate it. I’ve tried to improve things and evolve as a player, and it seems to be working nicely. The challenge will be, can I continue to keep trying to get better all the time?”

Though he claimed the limelight, it was far from a one-man show from Root – and he rightly paid tribute to the efforts of Sibley alongside him, who had already overcome a horror start to his tour in Sri Lanka with a match-and-series-sealing half-century in Galle, and today had to be extracted with a pinpoint reverse-swinging yorker from Jasprit Bumrah after six-and-a-half more hours of stoical resistance.

“That was a fantastic innings today,” Root said. “To come out with maybe a few question marks in his own mind about his game against spin, for him to go and put a performance early on in this series like that, against a high quality attack delivering reverse swing as well, was really impressive.

“He should take a lot of heart and confidence from that into the rest of the series. I really did feel for him – he deserved a hundred – but that’s what happens when you play against good players. They can take wickets later on in the day and the challenge will be to try and better that partnership that we got together, try and better that tomorrow.”

Suryakumar rises to No. 2 in T20I batting rankings, within two points of top-ranked Babar
“Every Time In Big Finals…”: Harmanpreet Kaur After CWG Final Loss vs Australia
Russell, Moeen, Hasaranga among big-ticket sign-ons for UAE’s ILT20
Harmanpreet: CWG 2022 gold ‘can change a lot of things’ for women’s cricket in India
Mooney: ‘The belief in the Australia dressing room is at an unprecedented level’