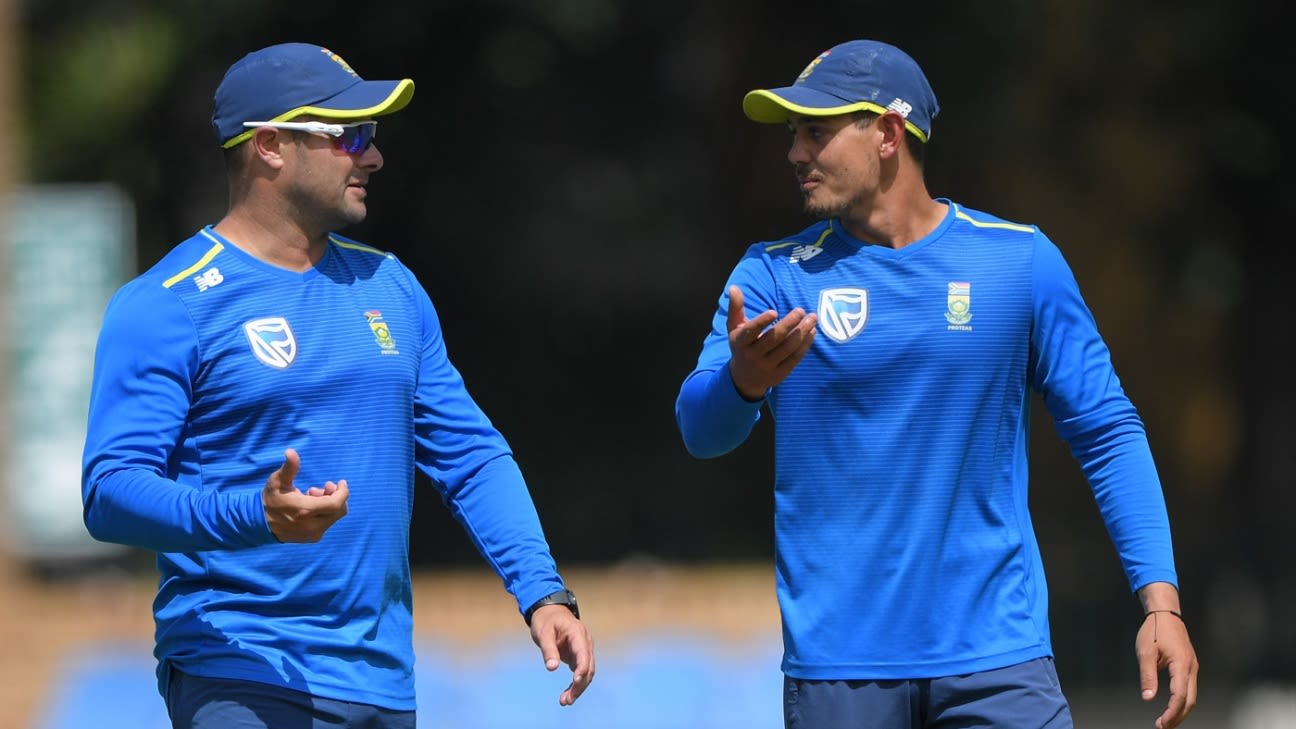 Quinton de Kock will not continue as South Africa’s Test captain after the Rawalpindi Test, with coach Mark Boucher saying that it’s important to “release him from that burden” of leading all three sides in the international arena. But it’s not a decision the team needs to make in a hurry, because the “disappointing and disruptive” development of Australia postponing their tour of South Africa means there isn’t any Test cricket on the horizon for South Africa.

“When we get back after this tour we’ve got a bit of time before our next Test series so we can sit down and make a good, solid call on who can take over from him and release him from that burden and try and get the best out of him,” Boucher said on the eve of South Africa’s second and final Test in Pakistan. “It’s been tough on Quinny. If you’re not scoring runs it gets highlighted, especially if you’re a captain.

“We’re not that harsh on Quinny in this environment. We know that he’s a quality player and there’s a good innings around the corner for him. He has been given the extra burden of being captain and that can be tough and something he’s not used to.”

“There’s probably a feeling that we were laying down the red carpet for Australia, which is frustrating at times. After all of that, it’s very disappointing and disruptive to our plans going forward”

De Kock was given the role in temporary capacity for the 2020-21 summer until a permanent candidate was found. South Africa may not know who that is just yet, but they seem to have decided that it would not be the wicketkeeper-batsman.

South Africa will not play Test cricket for up to nine months after the Pakistan series following the postponement of their three-match home series against Australia, scheduled for March. Australia withdrew from the tour yesterday, citing an “unacceptable” Covid-19 risk. Cricket Australia had offered to host the series in Perth, but Cricket South Africa refused after they took unprecedented steps to minimise risk for Australia, including government-approved VIP treatment. CSA called CA’s last-minute withdrawal “frustrating” and Boucher agreed with that sentiment.

“CSA have expressed their disappointment and it’s no different for the players. I know there was a lot of planning going into the Australian tour back home. We haven’t really been a part of that, but it seems a lot of goalposts were being moved for that particular tour, for Australia,” Boucher said. “For example, the one positive that came out of the bubble against Sri Lanka was the hotel that we stayed at (Irene County Club). We thought it was a great hotel for us as South Africans. It suits our needs and the cultural way that we are, being outdoors.

“And we even surrendered that to Australia. There’s probably a feeling that we were laying down the red carpet for Australia, which is frustrating at times. After all of that, it’s very disappointing and disruptive to our plans going forward.”

Apart from missing out on the opportunity to compete against the Australian Test side, South Africa also made arrangements to send their Test squad home from Pakistan at the conclusion of the Rawalpindi match on February 8 to quarantine ahead of the Australia series, and therefore miss the three-match T20I series in Lahore starting February 11. Although the players no longer need to return home early, a second-string T20I squad has already arrived in Pakistan so South Africa will release their Test players and a significant number of their support staff, as originally planned.

“Myself, (bowling coach) Charl Langveldt and (media manager) Sipokazi Sokanyile will be staying over and looking after the T20 squad. It’s not ideal,” Boucher said. “There’s been a lot of planning that’s gone into the two tours, and going back and quarantining for Australia. So the planning was all there.

“We were told at a very late moment that this wasn’t going to happen. It’s difficult for us to suddenly turn around when there’s a T20 series around the corner.”

De Kock is among those players who are scheduled to return home, albeit with no Australia Tests to prepare for now. He will also not need to ready himself for another captaincy stint, which might have affected his form with the bat. Since being named captain, de Kock has scored just 45 runs in four innings and, after four unsuccessful reviews in Karachi and questionable bowling and fielding calls, it appeared he may want to relinquish the role, or have it taken from him, sooner than expected. Boucher denied that.

“It wasn’t a consideration to make extreme decisions during a tour, especially a two-match Test series. I don’t think it’s time for panic,” Boucher said. “I think it’s time for us to get closer as a unit and make some good, solid calls. And understand that if the guys put in performances then we’ll be in a better position to win Test matches. It’s difficult to put it all on one person, especially a talent like Quinny. It’s not his fault that we’re 1-0 down. It’s some very poor cricket we played on day one (in Karachi).”

South Africa were bowled out for 220 on the first day of the first Test and lost seven wickets for 87 runs, which Boucher put down to a lack of application that he has seen his players try to improve on, both by watching Pakistan and in practice ahead of the second Test.

“Hopefully the guys have learnt their lesson by watching how Pakistan played, and from our mistakes,” he said. “I think the mental preparation going into this game has been good because they’ve witnessed it and seen how Pakistan have played, and how to put a big score together.

“There’s a lot more care about keeping their wickets and a lot more intensity when they defend; not so many shots in the nets. You can talk as much as you can. Sometimes they’ve got to see it to believe that’s the way to go about building innings in subcontinent conditions.”

This will be the last Test South Africa play in the season, with no indication of when the Australia tour would be rescheduled to or when another Test series comes around. ESPNcricinfo understands that CSA is looking at holding a T20 tournament at home in February-March before Pakistan visit the country for white-ball matches towards the end of March.