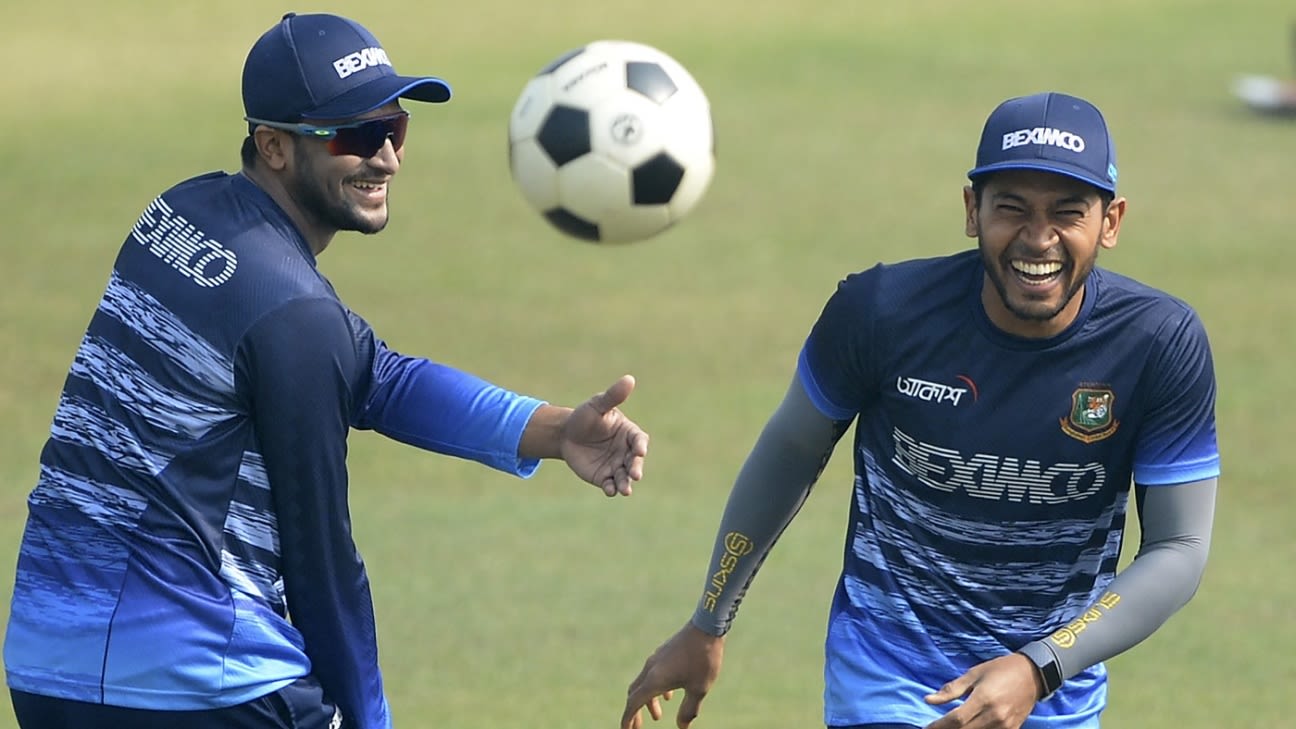 On paper, this first Test between Bangladesh and West Indies looks a bit of a mismatch. The tourists don’t have a bunch of their regulars, including their captain, and are taking on a team that dominates most at home. Bangladesh’s spin-heavy attack and experienced batsmen are expected to steamroll West Indies just as they did in 2018, but this is a side that will play its first Test in close to 12 months.

That should give West Indies a bit of an advantage. Some of their players have played Test cricket since the Covid-19 pandemic started – overall, they have played five Tests since then – unlike the Bangladeshis. But, at the same time, they are bereft of a lot of experience. Not to mention that they have lost four out of those five Tests, in England and in New Zealand, while winning just one.

West Indies’ batting will depend heavily on Jermaine Blackwood, captain Kraigg Brathwaite, and John Campbell. Blackwood’s 95 in the Southampton Test last year was the high point in his comeback to Test cricket, and he has been West Indies’ highest run-getter in the last 12 months. Brathwaite, despite some patchy form of late, has often batted long and well against Bangladesh, while Campbell has shown recent form in New Zealand and during the three-day practice game against a BCB XI.

Among the bowlers, Shannon Gabriel has been the frontman for the last three years, and their most successful bowler in these five Tests, where he has taken 17 wickets. Kemar Roach and Alzarri Joseph are expected to support him but it is likely that the spinners, especially offspinner Rahkeem Cornwall, will be entrusted with a lion’s share of the job in Chattogram. Cornwall’s 7 for 75 against Afghanistan in Lucknow was 14 months ago, but he picked up a five-for in the tour match last week, and should be high on confidence.

Bangladesh, meanwhile, won the ODI series 3-0 a week ago, but Test cricket’s rhythm will be different, even for experienced cricketers. It is likely that the pitch at Zahur Ahmed Chowdhury Stadium will be a batting paradise for the first couple of days, before slowing down.

That will encourage Bangladesh to revert to their best plan of action – a four-man spin attack, after having picked two seamers in their last home Test. Shakib Al Hasan and Mehidy Hasan will lead an attack that also includes Nayeem Hasan, who took nine wickets in their last Test. Bangladesh is also likely to prefer a second left-arm spinner to support the returning Shakib. Coach Russell Domingo has indicated that Mustafizur Rahman would be selected, after impressing the coaching staff with his new inswinger into the right-hander.

Their batting, as is usually the case, will depend heavily on Tamim Iqbal, Shakib and Mushfiqur Rahim, but runs will be expected from opener Saif Hassan, who hasn’t played his breakout Test innings yet, and Najmul Hossain Shanto.

With scores of 44 and 68, John Campbell showed form during West Indies’ warm-up match last week against the BCB XI. Campbell also scored a half-century in their last Test, so in the absence of many regulars, he will have to put a big price tag on his wicket.

Liton Das is likely to bat at No. 7, which might give Bangladesh a stroke-player around the time the second new-ball is available. He will be expected to make substantial contributions even when batting with the lower-order – not like his 36 runs in the three ODIs last month.

Bangladesh could go for a straightforward four-man spin attack with Rahman as the lone pacer. A fit Shakib will take Mohammad Mithun’s place in the middle-order while Mehidy, Taijul Islam and Nayeem Hasan should be natural choices on a pitch that would require patient and skilful bowling.

West Indies would likely have fielded a different bowling attack to the one that did duty in their last Test, in Wellington, but now their hand has been forced. Coach Phil Simmons is faced with balancing the attack with right number of spinners, while Nkrumah Bonner and Kyle Mayers seem certain for Test debuts.

The average first-innings score at Zahur Ahmed Chowdhury Stadium is 370, which indicates a batsman-friendly venue. There won’t be much for fast bowlers, and spinners should call the shots after the first couple of days. There’s good weather in store with moderate temperatures in Chattogram.

“I think Bangladesh will always have the edge no matter who they are playing at home, even though they haven’t played (Test) cricket for a year. They are a very strong side when they play at home. You can have lack of international cricket but you will be training properly. It takes away the rust, which is only a mental thing. It will go away after the first couple of hours of the first day.”

“Our performance in Tests in the last couple of years hasn’t been that good but it is something that we are really trying to rectify. We spoke long and hard about it after the Pakistan Test. I feel that we are definitely moving in the right direction. It is the start of a process for us in Tests, and the results are very important.”