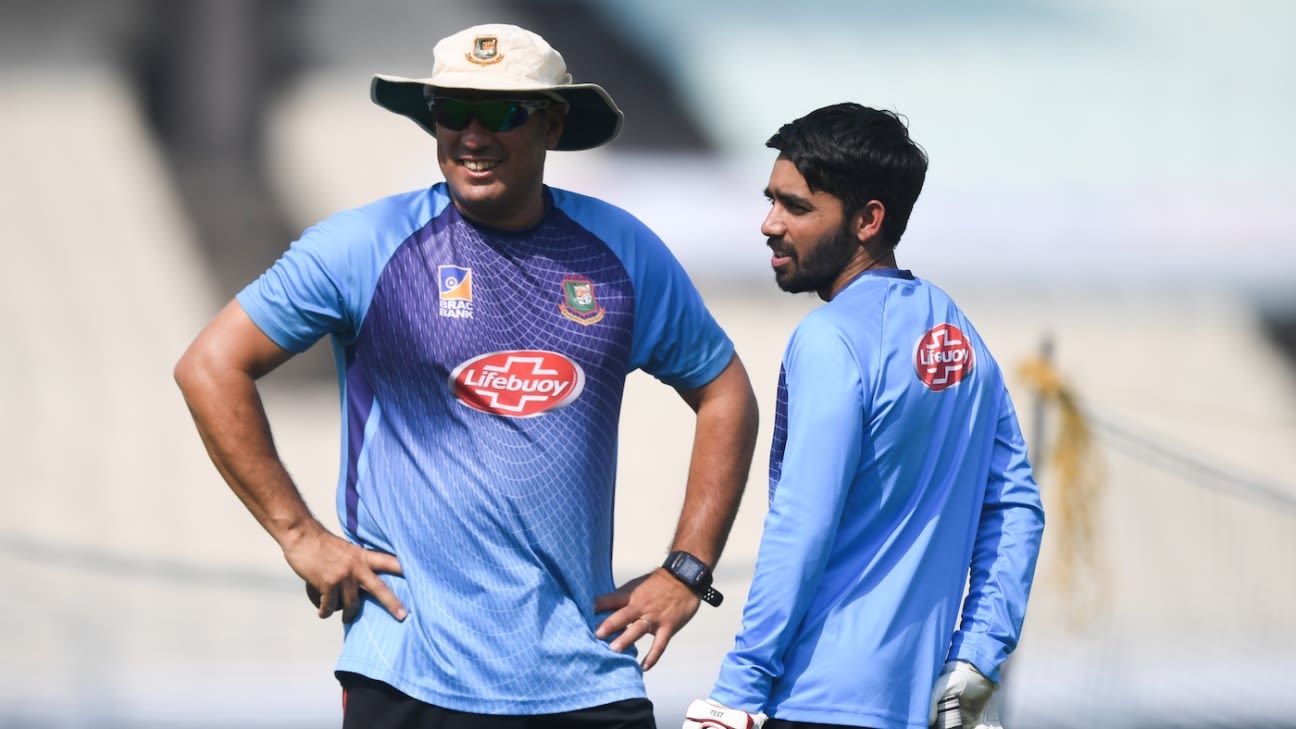 Fifteen months into his Test captaincy, Mominul Haque will finally get a full-strength Bangladesh side at his disposal. The return of Shakib Al Hasan, the man he had replaced on the fateful evening of October 29, 2019, has made this possible.

In his first series as Test captain, Bangladesh were without Shakib and Tamim Iqbal. For the second, Mushfiqur Rahim didn’t travel to Pakistan for the Karachi Test. Then against Zimbabwe last February, Mominul had both Tamim and Mushfiqur in the line-up; Mushfiqur going on to score the match-winning double-century. But adding Shakib to the mix is certainly a big difference to the captain’s arsenal.

Mominul said that the senior players are already supportive of his captaincy, but their presence in the field is going to add a missing dimension in terms of skills, experience and temperament.

“It is a good opportunity for a young captain when the full squad is available,” he said. “Shakib’s batting and bowling is going to help me lead the side that will now have a better combination. The senior players have played for around 12 or 13 years.

“I have nothing to ask for anything extra. They are all professionals, and they know exactly how to react and contribute. I am happy with their support in telling me how to handle certain situations.”

It is likely that Bangladesh will pick all four of their best spinners in the XI – Shakib, Taijul Islam, Mehidy Hasan and Nayeem Hasan. It also seems likely that they will field a rejuvenated Mustafizur Rahman, who has developed the in swinger to the right-hander along with his bag of cutters and other variations.

This strength is such a sharp contrast to Mominul’s first two tours as Test captain, where he had to handle a depleted squad. In India, the gap in skills between the two Test sides was starkly evident. Bangladesh were beaten in a little over three days in both Indore and Kolkata, which hosted a huge party to commemorate the country’s first pink-ball Test.

Then Bangladesh went down to their third innings defeat in a row against Pakistan in Karachi, even as the country hadn’t fully gotten over their historic triumph at the Under-19 World Cup in South Africa. Then they somehow redeemed themselves against Zimbabwe at home.

While having the seniors around is an advantage, Mominul would want to leave his stamp, both as a leader and batsman. While he is an established Test batsman, there have been rumblings on and off about his home and away record. He is regarded highly by senior cricketers, something that was particularly evident when Chandika Hathurusingha had dropped him in 2017, and later had to reinstate him in the squad.

Mominul’s captaincy from this point is going to be an interesting period in Bangladesh cricket, where captaincy is often dependent on hierarchy. On perhaps only a couple of occasions, has the BCB chose a captain before his perceived “turn” in terms of seniority.

After senior cricketers led the side during its pre-Test status era, the appointment of Naimur Rahman was a bit of a surprise in 2000. Nine years later, the 22-year old Shakib Al Hasan being thrust into the leadership role in the absence of the often injured Mortaza was another “out of turn” appointment.

Bangladesh have been led by one of their five senior cricketers since 2009, so Mominul’s hasty ascent during that distressing October evening in Dhaka was a bit of a surprise. He has captained in four Tests but even Mominul would admit that he hasn’t quite become a leader of the team.

For that, he would certainly need to lead the side in the presence of Bangladesh’s best cricketers, not just to prove to everyone that he can lead, but to ensure that he gives himself the best opportunity to win a Test match.