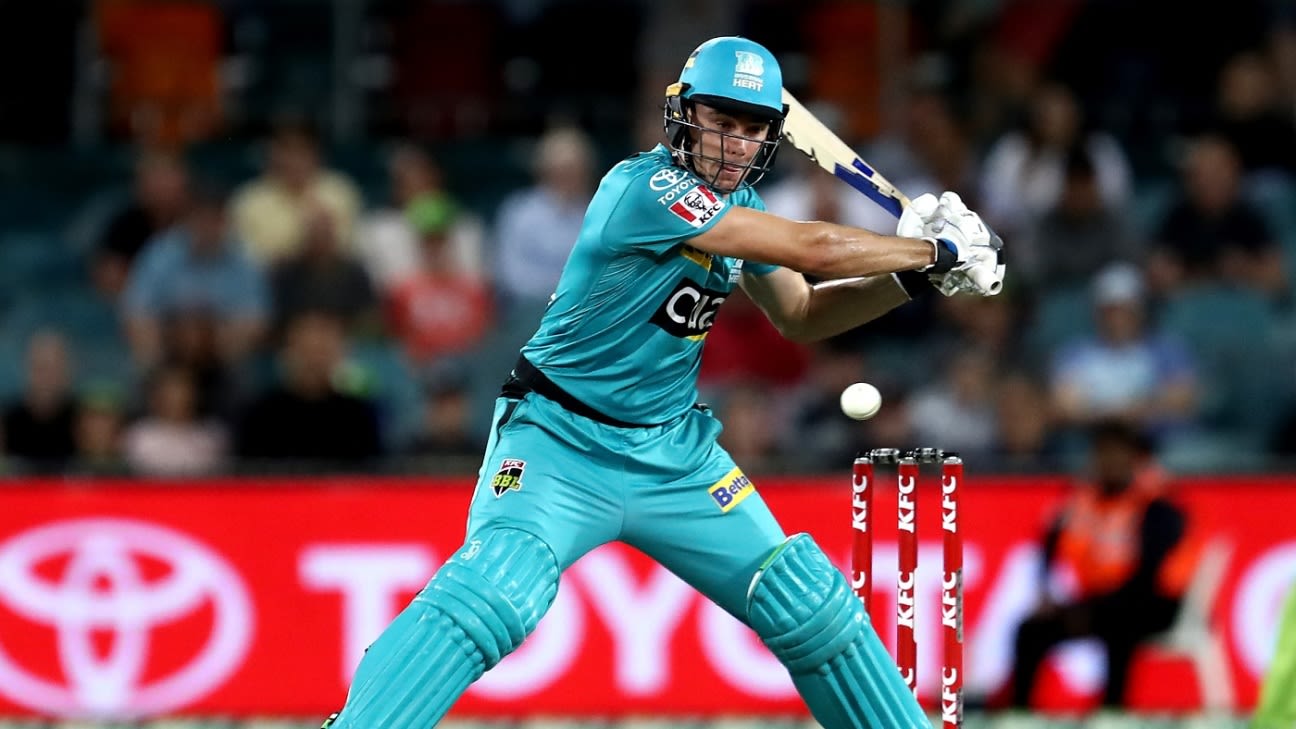 Sam Heazlett and Jimmy Peirson took full toll of some obligingly loose death bowling from the Sydney Thunder at Manuka Oval to rocket the Brisbane Heat into a preliminary final meeting with the Perth Scorchers, also to take place in Canberra on Thursday after a late change due to a snap lockdown in Western Australia.

The Heat had control of the Thunder’s innings for most of its journey thanks to a tight initial powerplay and then quality overs of spin from Mitchell Swepson and Marnus Labuschagne. However some characteristic big hitting from Ben Cutting allowed the Thunder to hammer 48 from the final four overs of their innings and set-up a defendable tally.

A couple of early wickets gave the Thunder further reason for optimism, but Heazlett held his nerve to get himself set alongside Labuschagne, before counter-attacking boldly and in the end definitively in the company of the wicketkeeper Peirson. The Heat, having won two finals in a row from fourth on the table, are now two more wins from plucking the title itself.

Heat plans give and take away

Quite transparently, Brisbane’s new ball plan called for a single over from Xavier Bartlett before he was subbed out for Morne Morkel. But so well did Bartlett bowl, bending the white Kookaburra late and at decent pace, that not only should he have had Usman Khawaja out lbw but his opening maiden raised questions of whether or not the Heat should divert from the blueprint and give him another over. Chris Lynn elected not to step in, handing the ball to Ben Laughlin and leaving Bartlett’s contribution to end with 1-1-0-0.

Whatever the debate over this decision, the Heat ended up enjoying much the better of the powerplay anyway. Laughlin should have had Alex Hales caught at short third man only for Mark Steketee to mistime his jump and see the ball skate through his unsteady fingers. Steketee, though, bowled beautifully at the other end, rewarded when Hales jammed a catch to mid on to depart for just eight after a dominant BBL.

Much as Khawaja and the captain Callum Ferguson tried, the Thunder were unable to build much momentum at all through the middle overs, held back largely by the spin of Swepson and Labuschagne on a surface that gave them just enough assistance. Swepson’s command of changes in pace while bowling a stumps-threatening line was testament to his evolution over recent years. Alex Ross and Daniel Sams were both beaten comprehensively on the back foot to each be lbw, while at the other end Labuschagne tempted Khawaja into a stumping.

At 8 for 134 with 10 balls remaining, the Thunder were staring at the sort of total they had themselves successfully chased to knock out the Adelaide Strikers at the Gabba. Cutting, though, had plenty of reason to be focused against the Heat after a running verbal battle with his former club for much of the season. He was able to find the range of Morkel, cracking one six over midwicket in the 18th over that pinged off the top of the Bradman Stand, then following up with two more telling blows in the 20th. Brendan Doggett chimed in with a couple of boundaries and suddenly the Heat was facing a pursuit closer to 160.

When Joe Denly and then Lynn were dismissed cheaply by the hard new ball, the Heat captain causing scenes of unrestrained jubilation when he miscued Doggett wretchedly to mid off, the game was drifting very much towards the Thunder. Brisbane’s response may in the past have been to panic; certainly that had been a not uncommon occurrence in recent seasons. Instead, Labuschagne and Heazlett took their time, calmly allowing the required rate to drift towards 11 per over but building a base from which to attack.

Importantly they did not allow Tanveer Sangha or Chris Green to be as impactful as their Heat counterparts, leaving plenty of overs for the pacemen to bowl in the closing overs. Labuschagne’s exit, to a highly debatable run out decision when it could not reasonably be determined whether the bails had been first dislodged by the ball or Sam Billings’ gloves, looked to be a blow to the chase, but also allowed the busy Peirson to enter the fray with plenty of balls to spare.

Heazlett and Peirson bring it home

What the calm, “take it deep” attitude of the Heat did was it presented a scenario where the Thunder bowlers could not afford to miss their marks as the overs ran out. Heazlett was by this time well established at the crease, familiar with the pace of the pitch, and able to capitalise with some panache from all the various errors in line and length the Thunder’s pacemen proceeded to serve up. Peirson was as effective himself, their left-right combination helping to bring further errors from the bowlers, with the runs piling up at better than two per ball.

There will doubtless be plenty of post-mortems from the Thunder and their coach Shane Bond on why the Sydney side’s bowling fell apart so completely. But the value of set batsmen for the closing stages was writ large across a stand worth 92 from 44 balls, bringing a conclusion that was both dramatic in its turnabout but also remarkable for how much ease the Heat ultimately won with. For Heazlett, given an arguably premature ODI debut in New Zealand as far back as 2017, it was a cathartic performance; demonstrating quality that has seldom been seen on this stage. A light sprinkling of drizzle in these overs made the ball fractionally greasy, aiding Heazlett as he feasted square of the wicket.