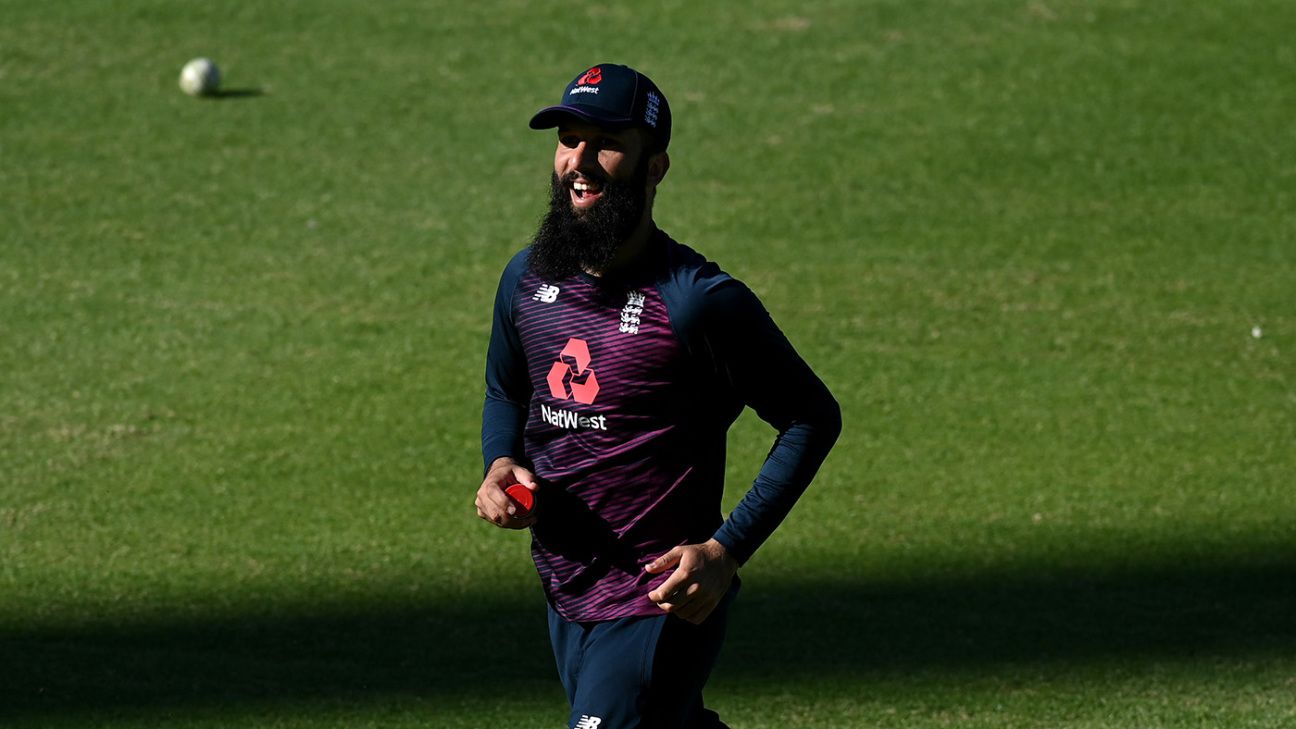 Allrounder to Asian community: ‘There’s a lot of conspiracy theories out there, but it’s just medicine evolving’

Scientists are still trying to determine what level of immunity, if any, comes from having had Covid-19 but, having spent two weeks confined to a hotel room with the illness, which forced him to miss England’s two-Test victory in Sri Lanka, Moeen said he would “definitely” take the vaccine when it is eventually made available to him.

“At the minute I’d take it and urge others to do it,” he told reporters via Zoom from Chennai, where England are preparing to face India in four Tests. “Having spoken to people who know quite a bit about it, I’d take it and get my family and others to take it.

“It’s like any vaccine, there’s a lot of conspiracy theories out there, but it’s just medicine evolving. In our community, people are sometimes not sure whether to take something – a bit cautious – but for things to get back to normal, it’s important that we do it.”

His comments follow reports earlier this month that Muslim leaders around the UK would seek to reassure people about the safety of Covid-19 vaccines amid some scepticism and anxiety within their communities.

A study based on patient records in England this week revealed that among the one million people aged over 80 and not living in care homes, 43% of white people had received their first vaccine dose compared with only 30% of the Bangladeshi and Pakistani people in that group. The figure dropped to 21% among black people. That is despite black people being four times more likely, and those from Pakistani and Bangladeshi backgrounds being twice as likely to die with Covid-19 than their white counterparts.

Moeen, who is Muslim of Pakistani descent, tested positive for Covid-19 upon arriving with the England squad in Sri Lanka and spent 13 days in isolation with fairly mild symptoms as his team swept the series 2-0. Chris Woakes, who travelled from Birmingham to Heathrow in the same minibus, was in isolation for a week and continued to return negative tests, leading Moeen to believe he may have contracted the illness either “at the airport or on the plane”.

Speaking publicly for the first time since his ordeal began, Moeen described his symptoms, initial fears and recovery.

“I didn’t sleep much on the plane and felt a bit jet-lagged and then in the evening I started to get splitting headaches,” he said. “The test was positive. I was not surprised, I had a feeling because once I landed I didn’t feel great.

“I had loss of taste for a day or so, splitting headaches for three days, my body was very sore and the fatigue was…. I’ve never experienced that sort of tiredness before in my life. It was three days feeling pretty rough and the rest was fine.

“When I initially got it, I thought, ‘the next five days will be crucial here’, I didn’t want the cough and fever and thankfully I didn’t have that. There’s part of you that’s worried and anticipating it would be bad.”

Pointing out that he came through with “no major issues”, Moeen found being in isolation tough, particularly once he started feeling better physically. But he credited his team-mates with keeping his spirits up with phone calls to check on him throughout and believed he wouldn’t be the last to go through the experience.

“The 14 days felt like they were dragging,” he said. “The last four days in particular were very tough because I felt fine but I was just stuck in a room.

“I wouldn’t wish it on anyone to be honest with you, just stuck there, especially when you land on a tour and then you’re positive, and then you get out and towards the end you’re watching the wicket spinning and you want to be out there.

“Once I was positive I wanted to get it over and done with really. It’s just the way it is now, I think I’ll be the first of a few guys on future tours maybe. It’s one of those things. It has been tough but I’m a big believer in ‘after hardship comes ease’. Hopefully there is some ease after this.”

Moeen re-joined the England squad midway through the first Test against Sri Lanka and returned to daily training during the second Test after an initial period easing back into physical activity. Now he is preparing for what could be his first Test in 18 months after being dropped one game into the 2019 Ashes series and then taking an extended break from red-ball cricket.

“When I got out, for four or five days, we had to be careful because I think heart-rate can be an issue after Covid for people who do a bit of running,” Moeen said. “From my point of view I’m good now, but I have no match practice or anything. When we get out of here I’ll train as hard as I can, spend time on my feet and try to be ready.”

Chris Silverwood, England’s head coach, said this week that Moeen was in contention to play the first Test in India, starting on February 5.

SLC hands Karunaratne one-year suspended ban for disciplinary breach
SLC to launch its own T10 league in June 2023
Chattogram Challengers sign Unmukt Chand for BPL 2023
England hire team chef amid concerns about Test tour catering
Warner – ‘I’m not a criminal. You should get the right of an appeal’