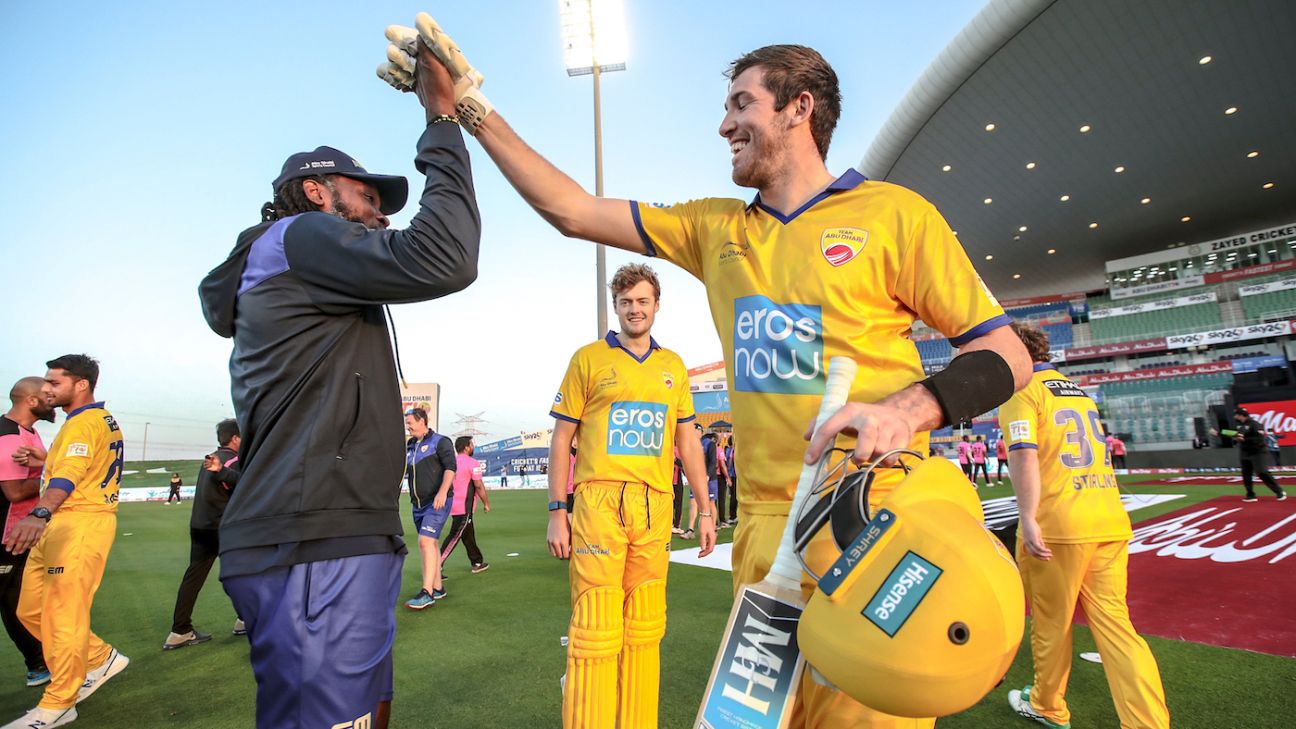 “I’d like to think more opportunities will come from this and we’ll see what happens,” Overton says

England hopefuls Tom Kohler-Cadmore, Joe Clarke, Ben Duckett and Jamie Overton all performed with the bat at the T10 League on Sunday, serving up some timely reminders of their talent in a year of great opportunity for English players.

The England think tank is committed to rotation throughout a stacked calendar in 2021, which includes the T20 World Cup in India at the back end of the year.

It means there are plenty of chances for players to force themselves into the reckoning across all three formats, with a busy home summer consisting of seven Tests, six ODIs and a further six T20Is. This follows the upcoming four-Test, three-ODI and five-T20I tour of India and that bookends the coming months with October’s pair of T20Is in Pakistan that are scheduled just days out from the World Cup’s opening matches.

After a 2020 in which cricket was ravaged by the Covid-19 pandemic, tournaments such as the T10 take on extra significance by offering up much needed time at the crease to find form and impress selectors.

“Hopefully [the England set-up are watching], you never know,” Overton said following his unbeaten 38 from just 11 balls that secured a first victory of the campaign for a British-heavy Team Abu Dhabi, against the Pune Devils.

“I’ve come over not expecting to do that much, get a few runs here and there and then who knows what can happen. I’d like to think more opportunities will come from this and we’ll see what happens.

“If you put in good performances then you can’t be that far away. I’m just focusing on my cricket and then if it happens, it happens.”

Overton is certainly on England’s radar and was selected for their behind-closed-doors training in July last year, so this cameo may have registered with the selectors. His devastating knock followed on from important nine-ball contributions by team-mates Clarke (29) and Duckett (20) that set up Overton’s late dramatics, in a game where Kohler-Cadmore top-scored with an unbeaten 61 from 25 balls for the opposition.

While Overton says he feels “fresh” having not picked up a cricket bat for some time, Kohler-Cadmore has been working over the winter with his Yorkshire coaches, and says those efforts are why he has shot to third on the leader board for most runs in this year’s T10 League.

“I’ve done a lot of work in Yorkshire and the coaches back home have been outstanding, especially with everything that’s going on with Covid. Those guys have really helped me and allowed me to hit the ground running here,” he said. “It is great fun. It’s nice having the freedom and obviously it’s nice when you hit some clean balls and they come off.”

Kohler-Cadmore now has back-to-back half-centuries for the Devils and 127 runs from his three innings, coming at a strike rate of 215.25. Only Sohail Akhtar (131) and Nicholas Pooran (162) – who hit 89 from only 26 balls as the Northern Warriors romped to victory against the Bangla Tigers in the day’s second match – have scored more than 26-year-old Kohler-Cadmore.

It’s a superb return from a man who was on tour with the England Lions this time last year and was also named in last summer’s back-to-work training squads with the England team. For now, he hopes to continue performing with the bat.

“I just want to win games with Pune and that’s all I’m focusing on at the minute, just trying to get as many runs as I possibly can,” Kohler-Cadmore said. “All the other stuff takes care of itself so it’s just focusing on the next game now.”

One man who may have hoped Ed Smith & Co weren’t tuning in on day four was Sussex’s George Garton. The 23-year-old’s two overs against the Warriors went for 48 runs, as Pooran walloped the England Lions seamer for 32 in the eighth over.