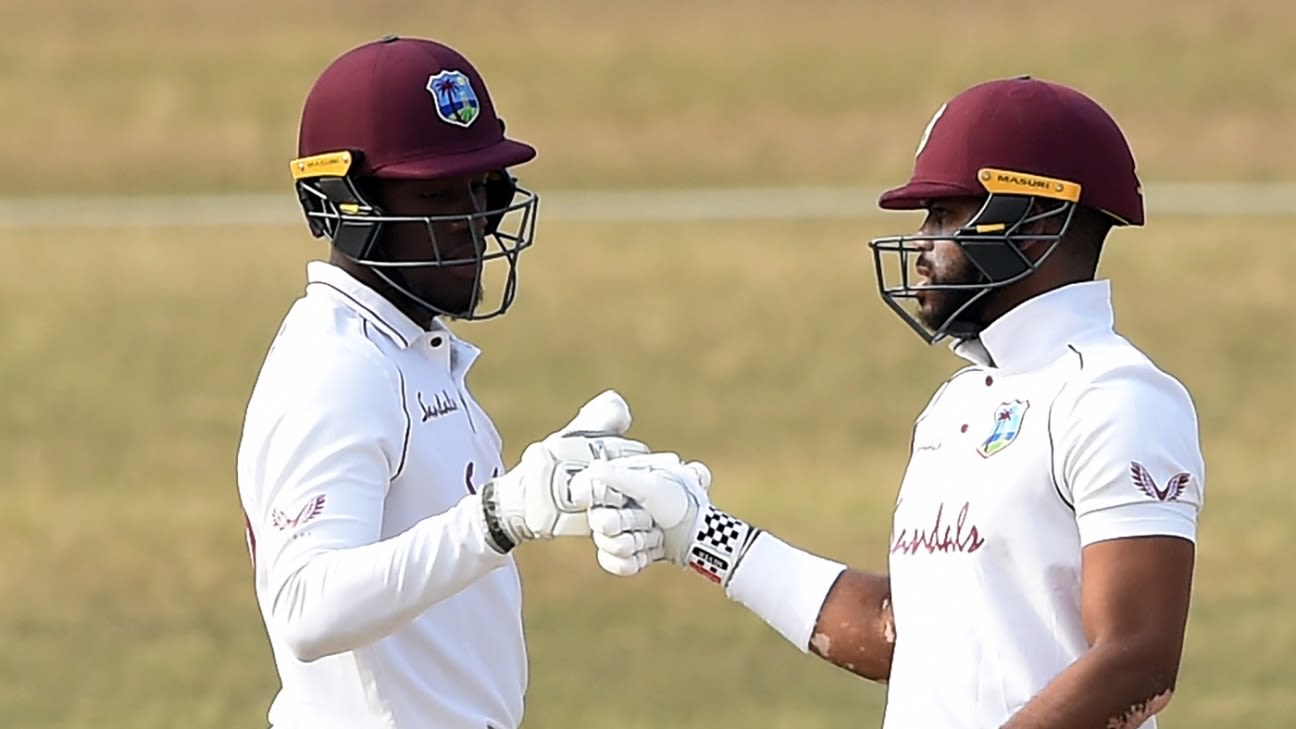 Mukidul Islam took four wickets while Khaled Ahmed picked up a three-for for the hosts, in Chattogram

A few more runs on the board would have delighted the West Indians at the end of their three-day game against the BCB XI at the MA Aziz Stadium in Chattogram. They were placed on a precarious 190 for 7 before useful lower-order contributions from Joshua Da Silva (46) and Raymon Reifer (49*) saved them, after half-centuries from John Campbell and Nkrumah Bonner on the second day. Eventually set a target of 389, the hosts finished on 63 for 2 in 29 overs in the fourth innings.

The West Indians lost No. 3 Bonner (80) early in the day before Da Silva and Reifer’s partnership. Da Silva struck three fours in his over two-hour stay, while Reifer was unbeaten on 49 off 94 balls, having hit five fours and a six. The duo added 82 runs for the eighth wicket in 28.3 overs.

In reply, the hosts lost Saif and Mohammad Naim to Reifer, before Shadman Islam (23*) and Yasir Ali (33*) took them to stumps without the loss of any further wickets.

The likes of Saif, Shadman and Yasir would not have taken much confidence from this game. It remains unclear whether Saif or Shadman will open with Tamim Iqbal in the first Test, starting February 3 across town, at the Zahur Ahmed Chowdhury Stadium.

For the West Indians, their captain Kraigg Brathwaite, didn’t bat in the second innings but he would be pleased with the efforts of Bonner, Campbell, Da Silva and Reifer. Jermaine Blackwood, Shayne Moseley and Kyle Mayers would, however, look to get more confidence from the nets.

After play, Brathwaite said that he was satisfied with the fact that his batsmen got two hits in the middle, while his bowlers, too, got to bowl enough overs. He was especially happy with how Rahkeem Cornwall, who took a five-for in the first innings, and Bonner performed.

“I am very happy. I thought the guys got a good blow,” Brathwaite said. “The batters got two chances to bat. Some guys got good scores. Fast bowlers and spinners got to bowl in the second innings where we could get 29 overs in. So I am quite happy. We got ten wickets in the first innings, which was good. I think the guys are ready to go.

“I was very impressed [with Cornwall]. He bowled well, created a lot of pressure with dot balls. I know Rahkeem’s ability. I knew he was always a quality offspinner. It is good to see him in these conditions. I know he will do well in this Test.

“It was very good to see Bonner get to a nice score. I thought John batted well in both innings. I don’t want to single out guys. Everyone is working really hard. I am happy with all the batters. They are confident, so we have to enjoy it out there.”