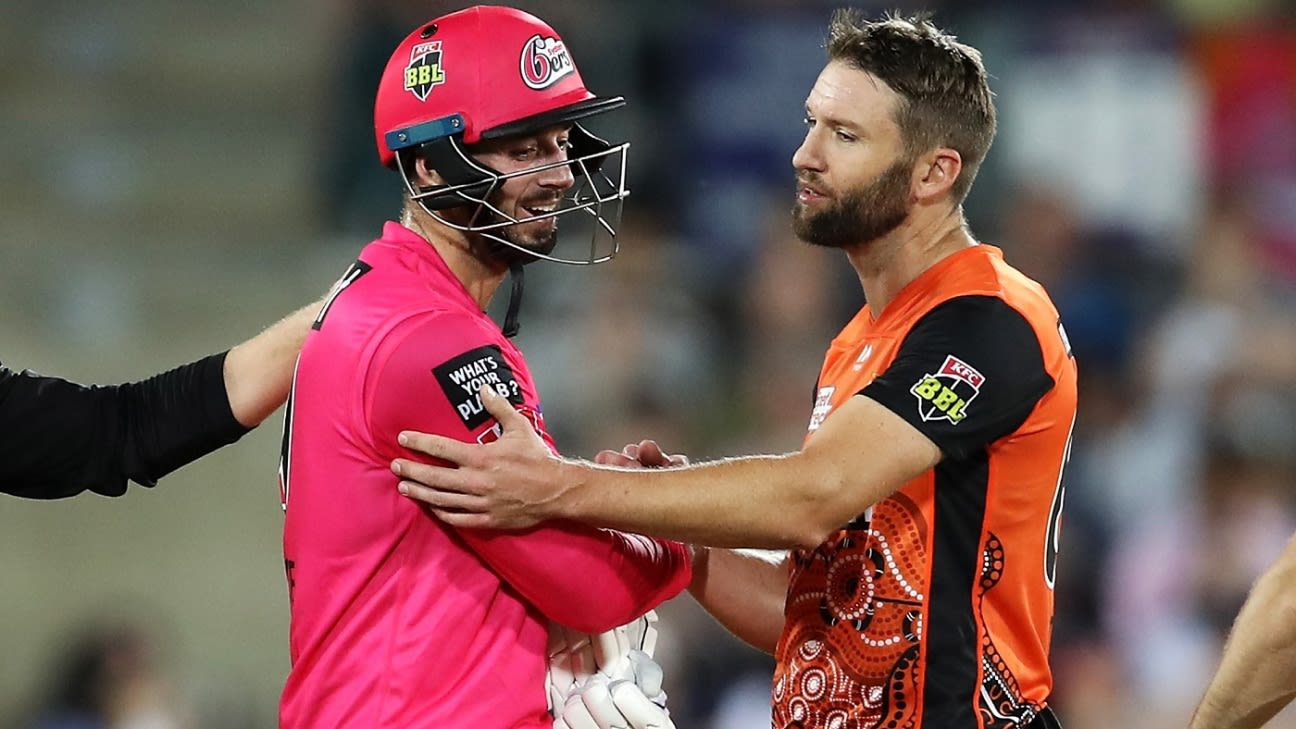 In what became a slightly farcical conclusion to the Qualifier final, Tye bowled a bouncer which was called wide and denied Vince the chance to go for a century

James Vince said he hoped Andrew Tye “didn’t mean it” when he bowled the bouncer which was called wide and denied Vince the chance to go for a century at the end of the Qualifier final in Canberra.

In what became a slightly farcical conclusion to the match, Daniel Hughes either blocked or left the final three deliveries off the 17th over from Jhye Richardson after hitting a boundary that left just two needed for victory with Vince at the non-striker’s end on 98.

Tye then delivered the first ball of the 18th over, a loopy bouncer which sailed high and wide down the leg side leaving umpire Paul Wilson no choice but to call wide. Tye quickly appeared to signal an apology but for a few seconds various players stared off at each other before what seemed a few frosty end-of-match handshakes.

When asked what Tye said, Vince told Fox Cricket: “Not a lot…don’t want to point fingers. It almost hit him on the toes, it was pretty short. I hope he didn’t mean it anyway.”

Speaking to fellow broadcaster Channel Seven, the Perth Scorchers captain Ashton Turner insisted it had been an accident. “I assure you AJ [Tye] plays the game in the right spirit and it was unintentional,” he said.

Vince did concede that he could have left himself a better chance of the hundred if he had not taken a single off Richardson having thumped a boundary straight down the ground to reach 97.

“It would have been nice to get a hundred, it was only really when Hughesy blocked out a couple that I started thinking about it,” he said. “In hindsight I took one off Richo [Richardson] to cover which I probably shouldn’t have taken. Just focused on getting the job done, would have been a bit of icing on the cake but in the end just happy to be there at the end and get the guys home.”

Turner, meanwhile, admitted he had made a mistake by batting first after the dew came down at Manuka Oval and made bowling and fielding second very tough. He termed this match, and the final group game against the Brisbane Heat, which the Scorchers lost to miss out on hosting rights for the Qualifier, as “missed opportunities” although was looking forward to the home Challenger final on Thursday in Perth against the winner of Sunday’s knockout.

“I got that one wrong for sure,” he said. “In 14 games so far we haven’t had any dew have an impact in the game, and behind me, the outfield is saturated at the moment. Don’t want to sound like I’m making excuses but it’s a bit of a reality, I’ll cop that on the chin and got that wrong one.”

The Scorchers also face action being taken against Mitchell Marsh for his outburst when given out caught down the leg side as the lack of DRS in the competition again became a talking point.

New Zealand A to tour India in August-September; Australia A may visit in November
Shakib Al Hasan named Bangladesh captain for Asia Cup and T20 World Cup
ILT20 bosses working with other boards to ‘minimise major clashes’ over dates, player availability
‘Bazball’ returns, but will South Africa drink to that?
Hetmyer, Paul and Motie ruled out of New Zealand ODI series