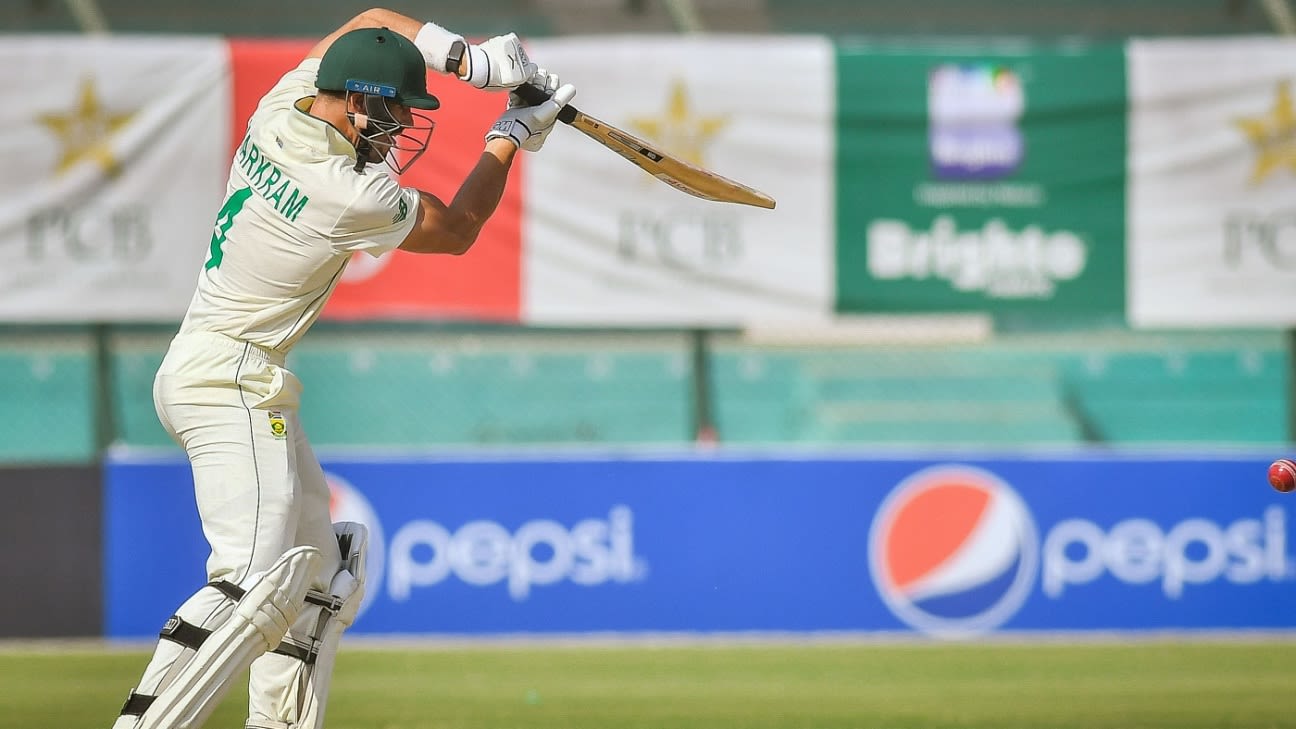 Aiden Markram has scored his first half-century in the subcontinent but is careful not to consider his corner turned just yet. After 84 runs from eight innings on previous tours to Sri Lanka and India, Markram knows that one 74 does not necessarily make a summer, but his second-innings half-century in Karachi is significant because it gave him confidence.

“By no means am I all of a sudden a finished product. It’s a small step in the right direction. Thats how I am trying to see it,” he said. “There’s a still a lot of learning and growing in conditions like these. From a satisfaction thing, there is a bit I can take form this knock, a little bit of confidence. I would have loved to kick on.”

Not only was Markram dismissed on the way to what could have been his first hundred since March 2018, but he was sent on his way 15 balls before the close of play on day three, after battling for more than five hours, and laying the foundation for a longer vigil. He found that patience was the one trait he had to lean on more than any other and was disappointed it ran out. “The longer you batted, the lower it got which posed its own challenge, putting spin aside. It was a slightly different innings for me. It was quite a challenge to accept spending time and not worrying about scoring,” Markram said.

His fifty, off 158 balls, was the slowest of his career but that was less important than that it came as part of a 127-run stand with Rassie van der Dussen. That partnership was the highest of the match and it took South Africa into the lead.

From a position where they were bowled out for 220 in the first innings, then conceded 70 runs in 12.2 overs to allow Pakistan to build a first innings lead over 150, for South Africa to have threatened to post decent target was a massive stride forward. “And then we took a few steps back, if that makes sense,” Markram said, in reference to the three wickets that fell for 10 runs at the end of day three.

Still, South Africa had recognised batsmen in the middle on day four and may have fancied their chances of scoring over 300 but ended up losing 9 for 70 in the second innings, to set Pakistan a target of just 88.

While Quinton de Kock could not put his finger on why South Africa lost wickets in clusters, Markram felt that conditions had something to do with it, because the in-coming batsmen often faced spin first up. “It’s generally very difficult for a new batter to get in. It’s something we’ve highlighted on previous tours to the subcontinent and on this tour. So (as a batsman) your first 20-30 balls are vital. It’s generally tough to get in against a spinning ball,” he said.

The trick is in two things: watching the way Pakistan played and drawing on experiences from home, not conditions-wise, but in approach. “On the mental side of things, there are times in South Africa in seamer-friendly conditions where you have to be brave and try something different. It’s the same here,” Markram said. “And we had the chance to learn from how Pakistan played and saw that we need to have the ability to back defence even in conditions that start to turn.”

On green tops in South Africa, batsmen often have to be willing to play more on the back foot and take on the short ball. On drier pitches in the subcontinent, they must do the opposite. They have to go forward, often to meet the pitch of a spinning ball, a strategy that worked well for Markram and van der Dussen. What South Africa need now is for it to work consistently and throughout the line-up, which may come the more this group tours the subcontinent.

For all of them, this is their first Test in Pakistan, while only three of them – de Kock, Faf du Plessis and Dean Elgar – have won a Test in the subcontinent (Galle 2014). The rest have been part of tough tours to India in 2015 and 2019, a rained out visit to Bangladesh in 2015 and a humbling trip to Sri Lanka in 2018. Across those series, South Africa’s problems remained the same: the inability for their batsmen to settle against spin. If they are to truly turn the corner, Markram suggested that needs to change.

“It’s important that we don’t make the same mistakes we’ve made in previous tours,” he said. “The thing that helped me was spending time in the middle and feeling like you can find a way to score.”