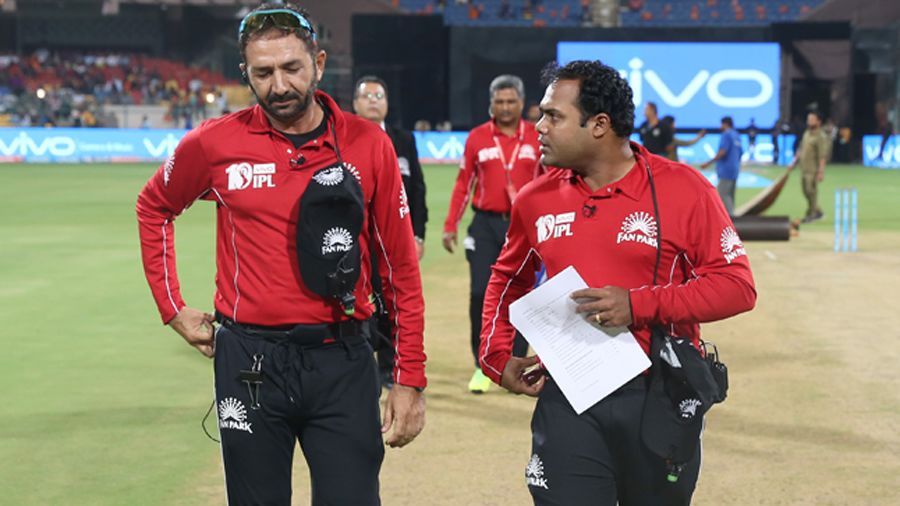 The trend of home umpires officiating in Tests during the pandemic will continue in the upcoming India-England series, with the ICC appointing the pair of Anil Chaudhary and Virender Sharma to stand alongside Nitin Menon in the first two Tests. Both matches will be played in Chennai, with the first Test starting on February 5 and the second from February 13.

While Menon, the only Indian official on the ICC’s Elite Panel, will be standing in his fourth Test, it will be the maiden Test appearance for both Chaudhary and Sharma, both of whom are part of ICC’s International Panel of umpires. While Chaudhary has an experience of officiating in 20 ODIs and 28 T20Is, Sharma has stood in just two ODIs and a solitary T20I.

The ICC has not yet announced the roster for the final two Tests, which are to be played in Ahmedabad, including a day-night Test starting February 24 followed by the fourth and final Test from March 4. It remains to be seen whether the ICC will get a neutral umpire for the second leg of the Test series.

Although the pandemic has allowed the ICC and cricket boards to gauge the performance of several match officials on the International Panel, the debate on whether the best umpires should stand in a Test series has remained a key talking point during this period. Last December, West Indies Test captain Jason Holder had questioned why ICC was not making Elite umpires travel for bilateral series when players were being asked to adhere to bio-secure environment norms.

However, England’s Richard Illingworth was recently announced as a neutral on-field umpire for the two-match Test series between Bangladesh and West Indies. But that was facilitated by the ICC only because hosts Bangladesh do not have an umpire in the ICC’S Elite Panel.

Menon, who became the 62nd Indian umpire to stand in Tests in 2019, has never stood in a pink-ball Test. However, he has the experience of standing in first-class matches under lights, including the Duleep Trophy and a Sheffield Shield game. Shamshuddin and Chaudhary are the next two senior-most umpires followed by Sharma and K Ananthapadmanabhan, both of whom were added to the International Panel recently.

Warner – ‘I’m not a criminal. You should get the right of an appeal’
SLC invites ICC Anti-Corruption Unit to investigate match-fixing allegations made in parliament
Can India stop New Zealand’s home juggernaut in high-scoring Hamilton?
India, New Zealand turn focus towards ODIs and the 2023 World Cup
‘It is not true’ – Langer adamant no cricket rift exists