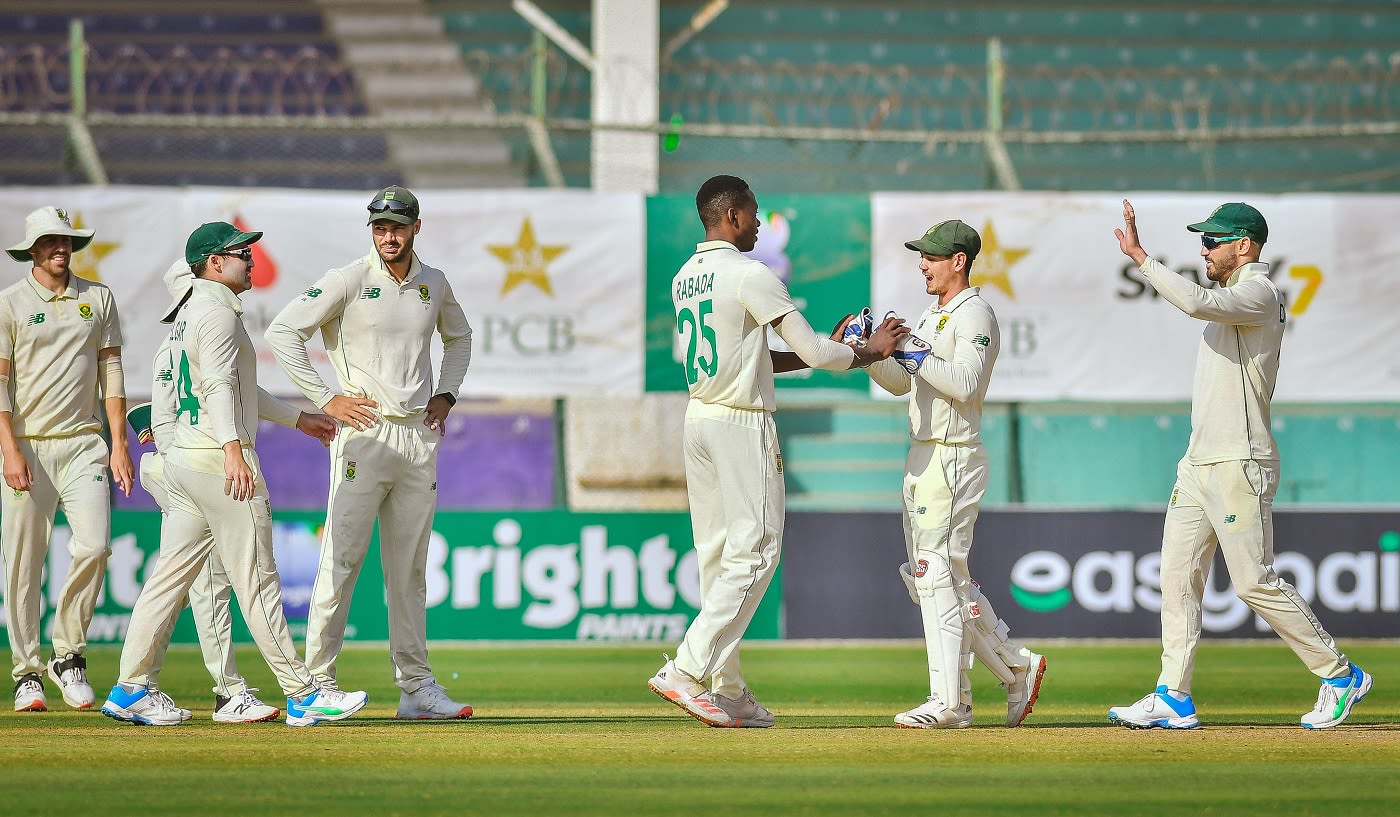 South Africa’s bowlers did not have as much success as they might have wanted on the third morning in Karachi as Pakistan’s tail plundered 70 runs in 12.2 overs, but one of them reached a special, personal milestone. Kagiso Rabada became the third-fastest and fourth-youngest bowler to take 200 Test wickets.

Only Waqar Younis (7725) and Dale Steyn (7848) needed fewer deliveries than Rabada (8154) to reach the landmark, while only Waqar, Kapil Dev, and Harbhajan Singh were younger than Rabada’s 25 years and 248 days. Of all of them, Rabada has the best strike rate of 40.8.

“It’s a massive feat to be included among a list of such names. When you start playing you don’t ever think you will be on such a list and have such statistics,” Rabada said.

He put his consistency at a level this demanding down to diligence and perseverance. “I don’t think there is a magic answer. It’s just hard work and spending time on your craft and seeing where you can get better and analysing it. It hasn’t all been easy.

“You find yourself trying to perfect something that might seem so simple but it’s constant repetition and hours and hours of work. It’s being relentless with that and trying to see how much better you can get and finding ways. It’s hard and relentless work.”

While Rabada has played alongside Steyn, he is yet to share trade secrets with Waqar, who is part of the opposition camp, as bowling coach.

Asked if he sought tips from Waqar, Rabada indicated there may be time to pick his brain after the series. “We practised at the same ground but I think it would be a bit concerning if he was coaching me and not the Pakistan team,” Rabada said. “He was a wonderful bowler and someone that I have watched a lot in my spare time, when I am trying to learn about the game, and I would love to chat to him once this is over.”

“It’s been hard work, like any Test match, especially in the subcontinent where you have to be a lot more patient. It tests you mentally, it tests you physically. I just got reminded of how Test cricket can impact you.”

That may be too late to seek advice on how to generate reverse swing in Pakistan but Rabada and Waqar may want to reflect on the difference in conditions in Pakistan over the span of their careers. Rabada’s national coach, Mark Boucher, remembers Pakistan being flat and conditions being ripe for reverse swing in the time of Waqar, while Rabada is experiencing it as spinner-friendly with variable bounce and “not a lot of demons but enough to be concerned about for batsmen”. He however expects spin to play a role on the final two days, when South Africa’s two left-armers, Keshav Maharaj and George Linde, will be key to their attempts to defend a total.

South Africa are effectively 29 for 4 and will need to bat well if they are to challenge Pakistan. But Rabada thinks they can still do enough to win the Test match. “That’s what we believe. That’s what we have to believe. Aiden (Markram) and Rassie (van der Dussen) batted extremely well and in the subcontinent wickets can fall in clusters. We are constantly tested and now we are going to get tested again tomorrow. We are up for the challenge. That’s why we practice so hard – for times like these. Hopefully we can get the team in a good position and get some runs on the board so we can set a target.”

As things stand, the match is delicately poised after a see-saw first three days, marking an interesting return to the longest format for Rabada. He has not played Test cricket since appearing for South Africa against England in Port Elizabeth last January. In that time he has been part of the IPL and T20I series against England, and he acknowledged that red-ball matches are a complex assessment of a players skills.

“Test cricket never gets old and it never gets any easier. You are constantly challenged,” he said. “It’s my first time playing Pakistan. That’s quite amazing. It’s the only place I haven’t played at and I’m glad I could get the opportunity to play here. It’s been hard work, like any Test match, especially in the subcontinent where you have to be a lot more patient. It tests you mentally, it tests you physically. I just got reminded of how Test cricket can impact you.”