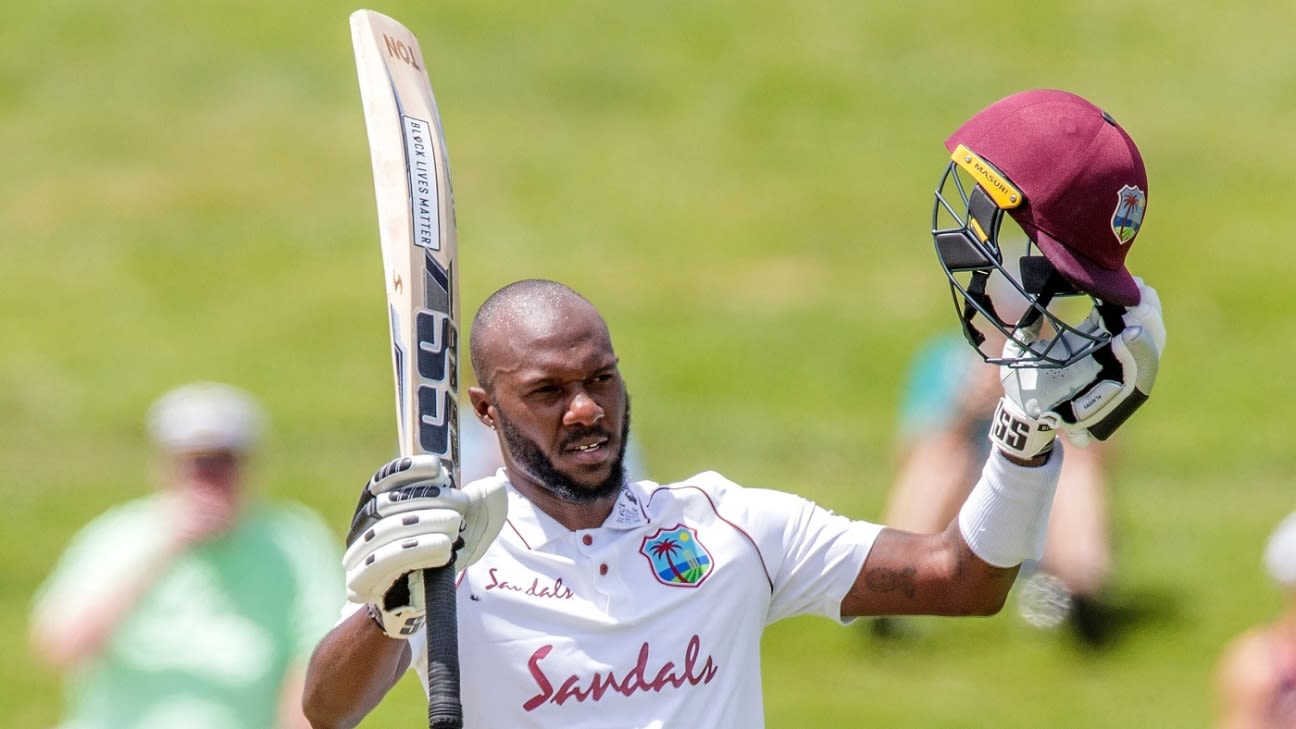 Trust Jermaine Blackwood to know what it’s like to bat deep into the fourth innings. His match-winning 95 during the Southampton Test against England last year put him in a category of cricketers who can withstand a different type of pressure: to win an overseas Test by batting beautifully in the fourth innings.

It hasn’t just been one innings for Blackwood recently though. He has been West Indies’ top run-getter in Test series in both England and New Zealand, having made 427 runs with a century and three fifties, averaging 42.70 in the combined five Tests. Not to forget, he is on the comeback trail.

“I think I have been out of the West Indies team for almost three years,” he said on his routines while being away from the national team. “On the sidelines, I did some work on my mental space. I trained twice a day and hit the gym every day. I put in a lot of hard work to be as fit as possible. I tried to come back as strong as possible. You can see the results. I am better at my shot selection, I am starting to understand my game very well, [and] I want to continue to do the same going forward.”

In the only Test innings that he played during this long break – as a concussion sub for Darren Bravo against India in Kingston in 2019 – Blackwood picked the brains of India captain Virat Kohli, who advised him to focus on spending time at the crease, a dictum he has taken to heart.

“I talked to Virat Kohli a few times as well on social media. The last time India toured the Caribbean, I had a chance to talk to him in Jamaica when I was there subbing,” he said, “So after the game, I just had a small conversation. I asked him about how I have a lot of half-centuries and [only] one century. He just said, ‘What will you do when you score a century? How many deliveries did you face?’ I said I faced 212 balls.

“He said, ‘That’s it, once you can bat some balls, you’re going to score runs’. So I took a big thing from that. After that conversation, I tell myself that once I can bat over 200 or 300 balls, the way I bat, I can score runs regardless of who I am playing against or where I am playing.”

Blackwood also believes he has a similar style to that of Rishabh Pant, and admitted to being impressed by his batting display during the Brisbane Test earlier this month.

“I was following the series between India and Australia,” Blackwood said. “During the fourth innings with an hour left, I was saying to myself that once Rishabh Pant is there, you’re going to win. I think we have the same batting style. He looked to score and a player who puts bowlers under pressure. That’s the same way I bat. I was just rooting for him because I know he was under a little bit of pressure. He is a very cool guy.”

But without disturbing his own method, he now has to make a whole new set of adjustments for the slow and low pitches in Bangladesh, where the West Indies ODI side were whitewashed 3-0. Blackwood believes that the adjustment has to happen mentally first.

“These type of surfaces are very slow. So I have to [prepare] mentally, because technically I can’t do too much work right now,” he said about the Bangladesh pitches. “But mentally I know it is going to be very slow and it will spin. Once mentally I am ready, I am good. Then everything takes care of itself.

Hasan Ali signs four-month deal with Warwickshire for 2023 season
Kotak, Cooley and Dilip put in charge of India A in Bangladesh
New Zealand pick Bracewell and bowl; India bring in Hooda for Samson
Suryakumar ‘makes everyone else look so much worse,’ says awestruck Maxwell
Renshaw nudges the selectors with unbeaten century