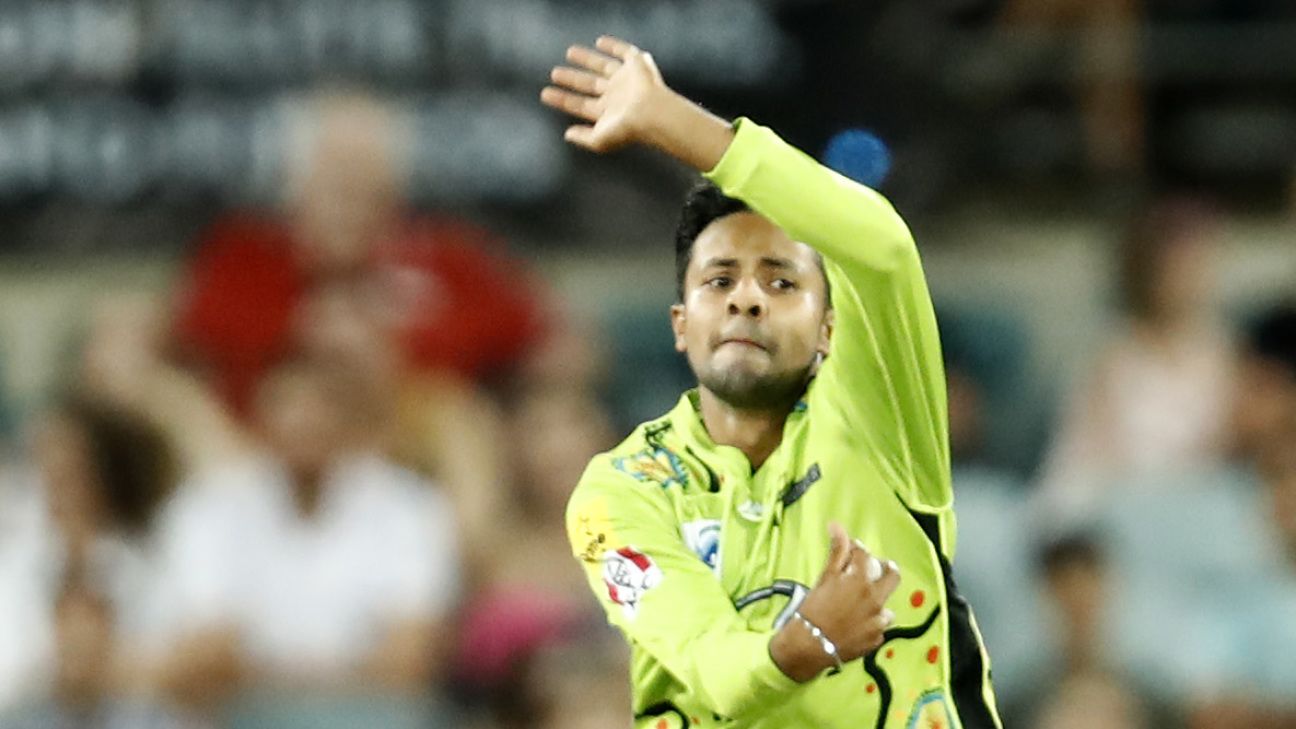 Tanveer Sangha, the 19-year-old legspinner, has been rewarded for a prolific first season in the BBL with a place in the Australia squad for the T20I series in New Zealand next month.

Sangha, part of the Sydney Thunder attack, has 21 wickets at the end of the group stage and will join the established spin pair of Adam Zampa and Ashton Agar in the squad.

With a number of players who would have been part of the T20I squad in normal circumstances set to be in South Africa for the Test series there is a fresh look to the group heading across the Tasman.

“It’s been the last couple of years that we’ve started to hear about Tanveer and now seeing him perform in the Big Bash and performing very well at a young age is very exciting,” national selector Trevor Hohns said. “We have high hopes for him going forward, however we don’t want to put too much pressure on a young player, especially a legspinner, because as we know it’s hard for young players.

“If he gets the opportunity in New Zealand we have to make sure we look after him because experienced players at international level will target a new guy. It’s a great opportunity for him and exposure for him to find out what the standard is like.”

Josh Philippe‘s second impressive season in a row for Sydney Sixers has pushed him further towards a maiden cap while Hobart Hurricanes quick Riley Meredith could also make his debut during the five matches.

Hohns suggested that Matthew Wade, who was dropped from the Test squad, could be the favourite to start as wicketkeeper although Philippe will push him close and both could play as specialist batsmen.

Ben McDermott, Jhye Richardson and Jason Behrendorff have been recalled on the strength of their BBL seasons while Ashton Turner has another chance at a middle-order role. Mitchell Marsh, who has had an injury-hit tournament for the Perth Scorchers, is also among the collection of allrounders.

With Richardson, who is the leading wicket-taker in the BBL with 27, it was decided that the T20 tour represented a better route back to international cricket which he has not played since dislocating his shoulder against Pakistan in the UAE in early 2019.

“Jhye was discussed at length regarding inclusion for the South Africa tour,” Hohns said. “However, we took advice from the medical people and in the end it was decided his comeback to international cricket should be gradual and that coming back in a T20 tour would be ideal.”