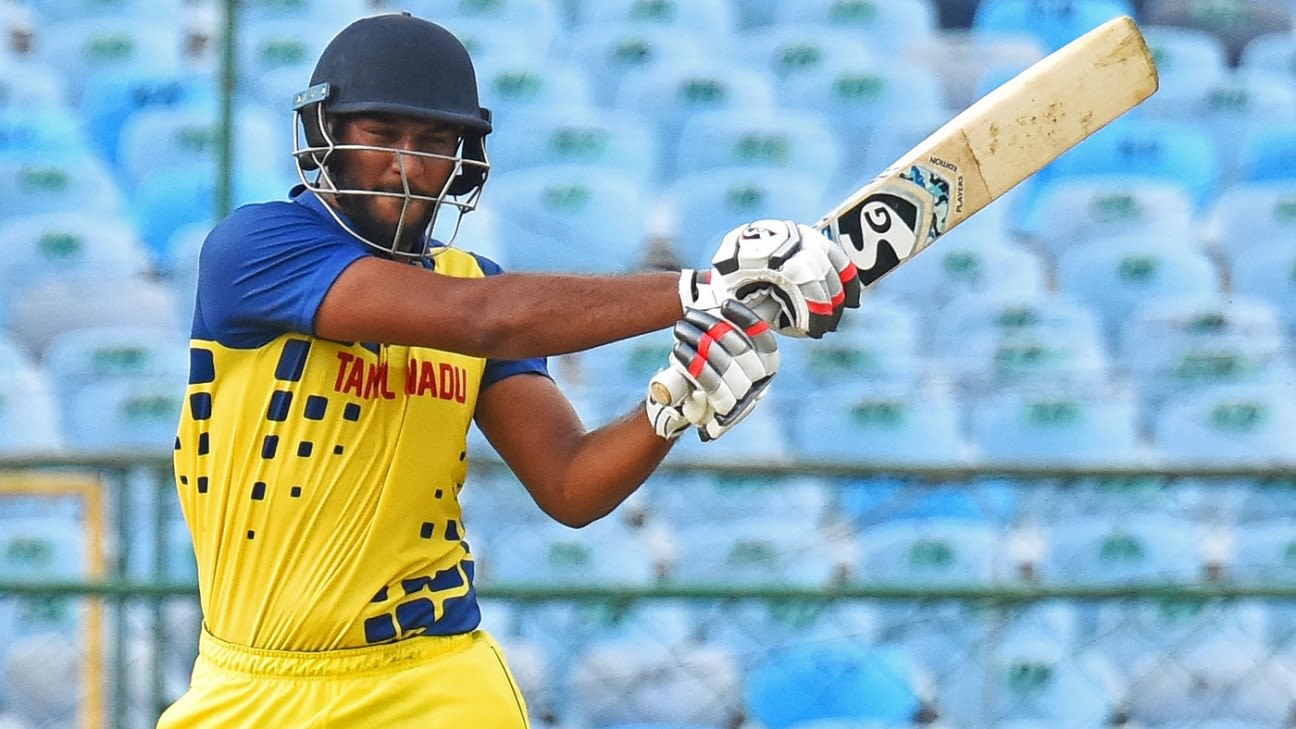 With their campaign on the line, the sixth-wicket pair add 75 off just 32 balls to pull off a stunning win

Seventy runs needed off 45 balls. A top order that had dismantled attacks during the course of five successive wins in the group stage had collapsed in a heap. Tamil Nadu’s campaign, which had looked bright enough to go one better than their runners-up finish last year, was in doldrums.

Himachal Pradesh’s bowlers were making a target of 136 seem more like 186. They were boisterous, having just dismissed Dinesh Karthik. Tamil Nadu were five down, with the last recognised pair at the crease. The decision to promote Sonu Yadav as a pinch hitter had backfired too, his run-a-ball 16 putting immense pressure on the lower order.

Enter Shahrukh Khan, who joined Baba Aparajith, who until then had scratched his way to 23 off 33 balls. With the asking rate mounting and Himachal scenting victory, they held firm and then turned the game on its head, adding 75 off just 32 balls as Tamil Nadu cantered home with 13 balls to spare.

The turning point of sorts was the third ball of the 14th over, bowled by the left-arm spinner Ayush Jamwal. Aparajith swatted it across the line, and the long-on fielder parried the ball over the ropes. With a reprieve behind him, Aparajith unleashed his strokes without fear. This rubbed off on the muscular Shahrukh too, his contribution an unbeaten 19-ball 40 laden with five fours and two sixes.

Aparajith remained unbeaten on 52 off 45, having overcome pockets of frustration in the middle overs. To his credit, he carried on, trusted his game, and saw the game through. Prior to this game, Aparajith had just batted once in the tournament. But when the pressure was on, he dug deep to see his side through.

Having watched the match-winning partnership nervously, Karthik, N Jagadeesan and C Hari Nishanth, who had done bulk of Tamil Nadu’s run-scoring in the league phase, exulted, roaring and punching the air, relieved at having a shot at making another final.

Earlier in the evening, Karthik had opted to field presumably to give his bowlers a relatively dry ball to play with. They all responded superbly to restrict Himachal to 135 for 9. The pace duo of Sandeep Warrier and Yadav used contrasting methods to finish with combined figures of 5 for 46 off their eight overs.

Warrier, who will fly off to join the India team as a net bowler on Thursday, hit the deck hard and relied on seam movement and bounce. Yadav used his slower variations to lull batsmen into big hits. In the middle overs, M Ashwin, the legspinner, and R Sai Kishore, the left-arm spinner, didn’t let the batsmen dictate terms.

Rishi Dhawan was the only batsman who looked fluent and adjusted to the pace of the surface quickly, finishing with an unbeaten 26-ball 35 to give the innings a late push, after Abhimanyu Rana and Nitin Sharma wasted starts to fall just as Himachal looked to accelerate at different stages. And as well as Vaibhav Arora made the new ball talk, prising out three huge top-order wickets, Himachal just didn’t have enough runs to stop Tamil Nadu’s counter-punch.

Series – and T20 World Cup spots – on the line as West Indies vs India goes to Florida for the weekend
Raza: I may not be a fighter pilot, but I am a fighter within myself
Australia out to cement their legacy, India out to make history
Hendricks, Markram propel South Africa as Ireland again fall short in close finish
Russell, Moeen, Hasaranga among big-ticket sign-ons for UAE’s ILT20