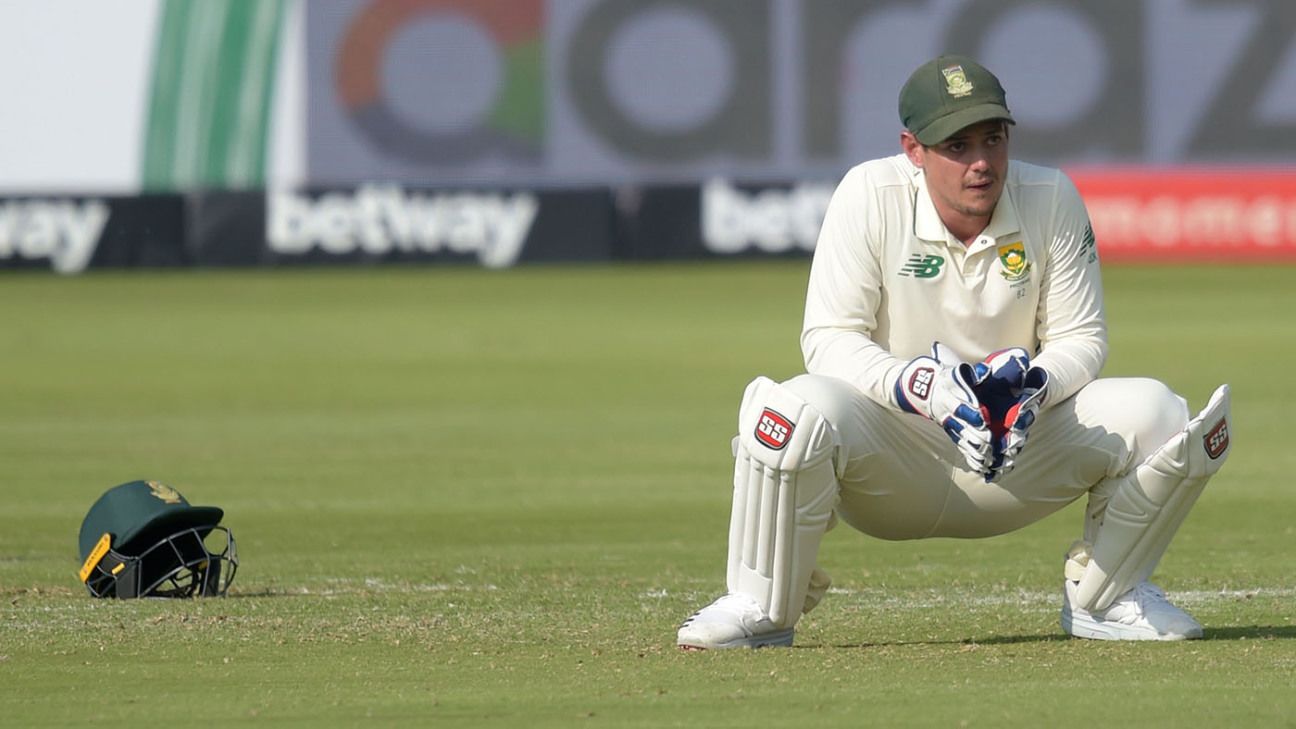 Quinton de Kock could become one of the most capped South African cricketers of all time, according to his national coach Mark Boucher.

De Kock will make his 50th Test appearance in Karachi, where he will also captain South Africa for the third time in the format, and Boucher hopes he will go on to play at least another century of Tests. “It’s a special occasion for any player. It’s just the start of his career. There’s possibly another 100 Test matches there for him,” Boucher said.

If that is the case, de Kock will reach the same number of matches Boucher hoped to retire on, 150, before an eye injury forced him to call time on his career three Tests early. Boucher remains South Africa’s second-most capped Test player, after Jacques Kallis, who played 166 matches and is one of only nine players to make 150 or more Test appearances.

Given South Africa’s schedule, in which they play around 10 Tests a year, if Boucher’s prediction is to come true, de Kock could be playing Test cricket in 2031, at the age of 38, having begun his career in 2014 at the age of 21. “Quinny is a special cricketer,” Boucher said. “He is the type of player opposition hope doesn’t get into good form because he can take the game away from anyone very quickly.”

That side of de Kock has been hiding this summer. Though the sample size is small, at just five innings, de Kock has not yet crossed 30 as he’s juggling his new role as all-format captain – albeit in a temporary capacity at Test level – and life in a bio-secure environment. “He enjoys the outdoors so it’s testing for him, being inside the entire time,” Boucher said. “And being a captain is an extra we have added on to him. We’re trying to help him out as much as we can in that department. But I’m very happy he has taken on that role. I know it’s tough at times, especially if your performances aren’t exactly where you want them to be. Hopefully we can get the best of Quinny in this series. It can only be good for him as a person, a captain and also for the team.”

But the best of de Kock has come under different circumstances, and Covid-19 complications and captaincy concerns aside, it’s his position in the batting line-up that will come under scrutiny. De Kock was promoted from No.7 to No.5 in the final Test of last summer, ahead of specialist batsman Temba Bavuma. He had previously only batted in that position once, at Lord’s in 2017, when Faf du Plessis was on paternity leave.

“Let’s put it this way. I’m alright with batting at No. 5, it just sounds like everyone else can’t decide whether I should bat – at 5 or 7 at the moment.”

De Kock has only batted at No.5 five times and averages 32.20, compared to his 49.87 average batting at No.7, which he has done in 35 innings, where he has score all five of his Test hundreds. For some, that is too low for someone of de Kock’s ability but consider that 15 of his 21 half-centuries have come batting at No. 6 and 7, and only one at No. 5, and maybe it’s an indication that he enjoys the urgency of batting with the lower order.

The man himself does not seem to mind where he bats, and probably has enough else to think about at the moment, but acknowledged it is the subject of some debate. “Let’s put it this way. I’m alright with batting at No. 5, it just sounds like everyone else can’t decide whether I should bat – at 5 or 7 at the moment,” de Kock said on arrival in Pakistan last week. “I’m happy there, it’s probably just the outside noise. If I’m batting at 7 they want me at 5, If I’m batting at 5 they want me at 7. At the moment I’m settled at 5 and I’m happy to be there.”

He will lead South Africa in two Tests in Pakistan but will return home with other members of the Test squad to prepare for a series against Australia, leaving Heinrich Klaasen to captain the T20 side in Pakistan. Then, South Africa are due to host Pakistan for white-ball series. By then, de Kock and his ilk would have spent little more than three weeks out in the last six months at home with their families. Having already called bubble life unsustainable, de Kock may have some clarity about how much more cricket and how many more caps he can earn.