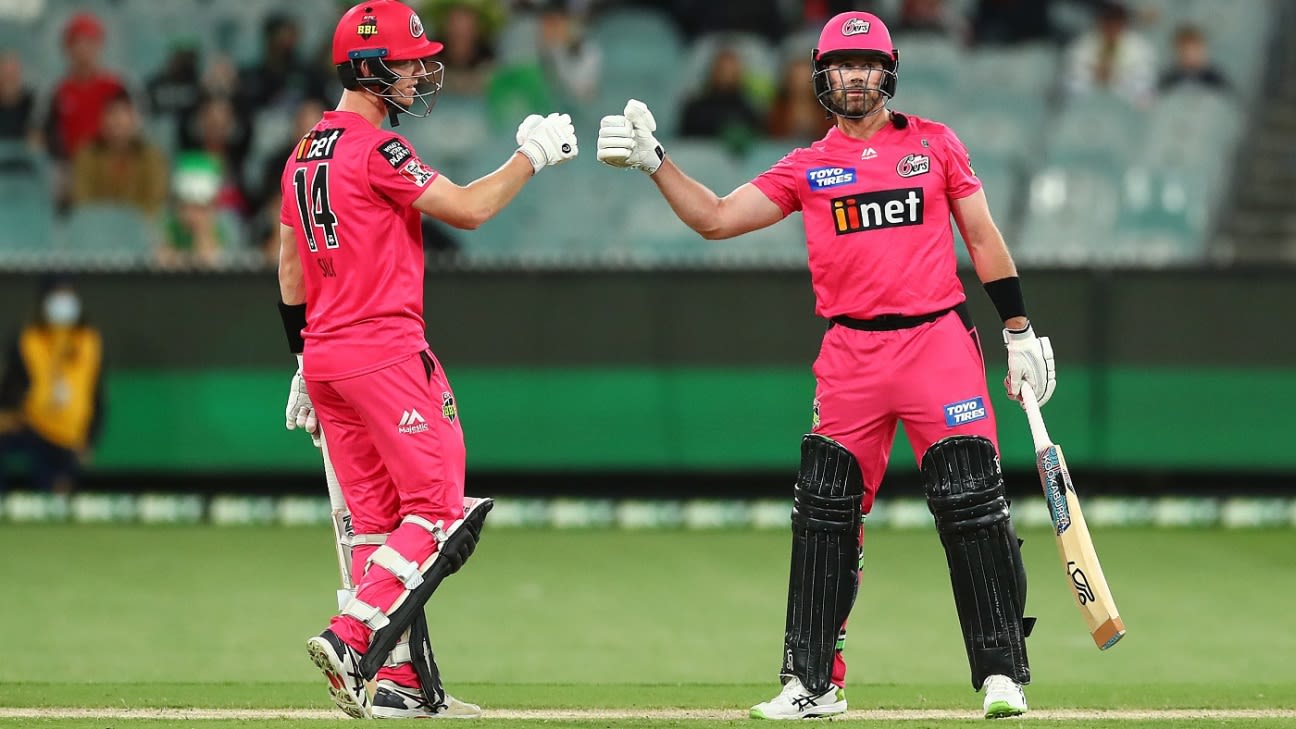 Dan Christian and Jordan Silk produced a clinical, superbly timed chase to beat the Melbourne Stars at the MCG. But it was the Sixers’ ninth Bash Boost point halfway through the run chase, gleaned through a combination of quality new ball bowling, some indecisive batting from the Stars, and some James Vince magic that ensured the Sixers finished on top of the BBL table and the Stars missed the playoffs for just the second time in competition history.

The stars had aligned for Glenn Maxwell‘s team to come from the clouds and reach the playoffs having started the final day of the season needing a host of results to go their way. After the Brisbane Heat and Melbourne Renegades obliged with upset wins, they needed to claim all four points against the Sixers, including the Bash Boost in order to play finals, but it took just eight overs in the chase for the Stars’ hopes to be dashed.

The Stars had set a highly competitive total of 6 for 177 thanks to Maxwell’s extraordinary 66 from 41 balls and Hilton Cartwright blazing 38 not out from just 19. But their season was derailed in the first 10 overs thanks to the new BBL rule, with Ben Dwarshuis bowling a match-winning spell claiming 3 for 27 to strangle the Stars top-order as they mustered just 72 runs in the opening 10 overs.

The Sixers knew they only needed 72 in 10 overs to secure a home final and despite losing 2 for 9, Vince and Moises Henriques cruised to 72 in just eight overs. The sting came out of the game with the Stars season over. Vince and Henriques failed to kick on but Christian and Silk pounced on a deflated Stars attack combining for an unbeaten 77-run stand from just 41 balls to win the game with one delivery to spare. Christian finished 49 not out from just 23 balls while Silk was unbeaten on 35.

The Sixers will now travel to Canberra to face the Perth Scorchers in the Qualifier, having nominated Manuka Oval as their home venue due to the border restrictions in New South Wales.

The Stars had to try and balance the challenge of setting a decent Bash Boost target after 10 overs as well as a winning 20-over total. The early loss of Marcus Stoinis, who flicked Dwarshuis to short fine leg, caused some further indecision. Steve O’Keefe conceded just three runs in the fifth over to leave Stars 1 for 35 with Nick Larkin and Seb Gotch struggling on a slow, two-paced pitch. The Stars padded up Nathan Coulter-Nile with an eye on promoting him to try and set a decent Bash Boost target. But they surmised the surface was too difficult for a pinch-hitter to negotiate and opted to stay with their original order as Sean Abbott and Dwarshuis bowled five overs in the first 10 overs and took all three wickets between them. Maxwell and Nic Maddinson were caught between trying to find the rope while keeping their wickets intact. Maxwell thumped two fours and six in the ninth and 10th over but the Stars could only muster 72 after 10 overs, which in hindsight cost them dearly.

Maxwell then put his outrageous skill on display. He lost Maddinson at the end of the 12th over when he was poised to take the Power Surge. He delayed it by an over and then took full advantage with some staggering batting. He struck five fours in the Surge with some conventional striking down the ground and over cover. Two overs later he pulled out two outrageous reverse sweeps to hit Carlos Brathwaite twice over short third man. He looked set to inflict even more damage in the last three overs but he chopped on off Abbott.

Cartwright was able to inflict the damage in Maxwell’s absence. He was fortunate to be dropped by the usually reliable Silk at deep midwicket. Cartwright made the Sixers pay in the last over. Jake Ball had been subbed in for Jackson Bird to bowl at the death. Cartwright clubbed him for three enormous sixes in the last over. The last went into the second tier at the monstrous square leg boundary to bring the small crowd to life and give the Stars momentum.

The Sixers’ sole focus was to score 72 runs in 10 overs to claim top spot, a home final and end the Stars season, and it took Vince and Henriques just eight overs to do it. Initially, the Stars looked like pulling off the impossible heist. Sam Rainbird had come into the Stars’ squad as an injury-replacement player earlier in the season but had only played four matches in total and had not been selected in the Stars’ last three games. But he was picked as a specific match-up for Josh Philippe and it paid huge dividends in the opening over. Philippe was undone by the left-arm angle slicing a thick edge to Billy Stanlake at short third man for 1. Dan Hughes fell in the next over top-edging Stanlake towards third man with Maxwell taking an outstanding catch running back from slip. But Vince took control and feasted on some wayward bowling. He struck three boundaries and a six, albeit from a slightly fortuitous top edge, but rarely looked troubled as he and Henriques cruised to 72 inside just 8 overs with barely a risk needed.

With the home final secured, the sting came of the game and the Sixers wobbled momentarily. Vince chipped Nic Maddinson innocuously to cover for 46. Henriques was needlessly run out for 38 and Brathwaite came and went to leave the Sixers 5 for 103 needing 75 to win from 42 balls. But Christian and Silk continued their outstanding form timing yet another chase to perfection. The pair struck eight fours between them while Christian produced two massive sixes. At one stage they required 30 from 15 balls but never panicked as the Stars bowling repeatedly wavered, with Christian finding the boundary twice in the last over off Stanlake to end Stars’ campaign.