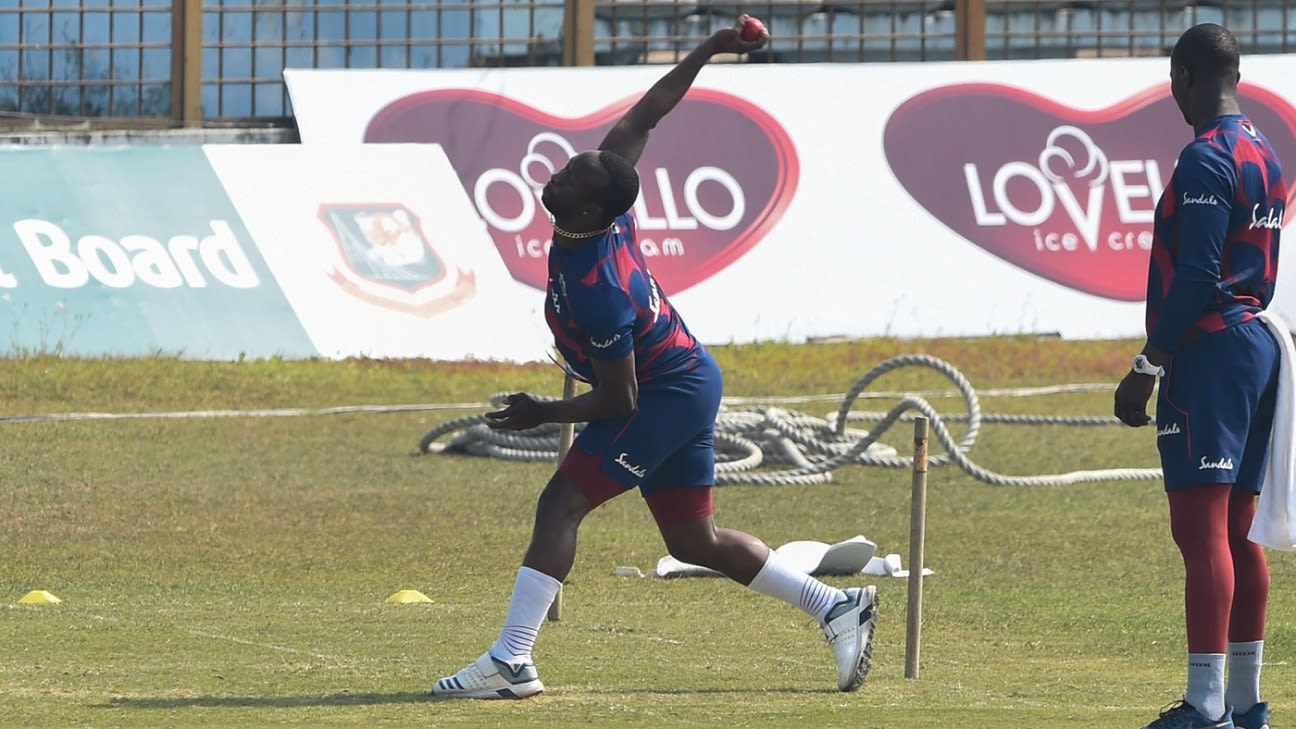 After a forgettable ODI series against Bangladesh, West Indies are gearing up for the two Tests, and Kemar Roach, one of the more experienced players in the squad, is clear about what his fellow pacemen will need to do to challenge the hosts. He says a tough time awaits the fast bowlers on the mostly benign Chattogram and Dhaka pitches, but the key will be consistency and working on getting the ball to reverse.

“It is hard work for fast bowlers out here,” Roach said. “The pitches aren’t conducive to speed or any seam movement. It is all about being consistent and putting the ball in the right areas. It is a pretty straight length [while] challenging the batsmen on the front foot. That’s mainly what your best chances are to succeed in Bangladesh.

“[Also] working on the ball as hard as we can, trying to get the ball to reverse as early as you can to trouble the Bangladesh middle order.”

The visitors, who were comprehensively beaten in all three ODIs, have a three-day practice match lined up at the MA Aziz Stadium in Chattogram over the weekend. The first Test starts at the Zahur Ahmed Chowdhury Stadium, across town, next Wednesday.

Roach said West Indies’ knowledge of the Bangladesh batsmen will come in handy as the Tests get underway. “There’s a lot of planning going into it, and a lot of execution that needs to be done,” he said. “It is all about being consistent and putting up a good fight. My work is cut out – I am very sure about that – so I am looking forward to it.

“We know the Bangladeshi batsmen, they have been the same side for a couple of years. Their main batters that get the job done, we know them pretty well now.”

He said that another positive for West Indies was the good form of their three frontline pacers – Shannon Gabriel, Alzarri Joseph and himself. “I think Shannon is in a good run of form right now. I have been doing okay myself. It is all about us, trying to get our best performances down here.

“The team is pretty inexperienced, but I think there’s enough to get us over the line. It is all about us believing in ourselves, backing our ability and getting the job done. I am looking forward to a good Test series, and I am sure we can pull one out of the hat.”

Roach added that Joseph, who was also in the ODI squad and had played two matches, had shown them the way to bowl on these pitches. “[Joseph] was consistent. I think he really challenged the batsmen’s technique. He didn’t get the wickets but I was pretty impressed how he handled the pressure. I have definitely taken some stuff from him.

“When the bowling unit has a discussion, he will tell us what he thought about the Bangladeshi batsmen and then we can plan from there. It is going to be interesting.”

Roach was also pleased by the extra work the Test batsmen have been putting in at the nets against spin bowling. “The batsmen have been doing a lot of work with spin. They have been listening and asking questions on how to improve. I am pretty happy with what I am seeing. I am sure that they will go well.

“The guys are definitely putting in the extra work when it comes to playing spin well, and trying to get their stride in, using their feet and sweeping.

“I have seen improvement in the way the guys have worked since we got here – they are working a little bit smarter – so I hope for them they get some good results in the Test series and win a game for West Indies.”

Hasan Ali signs four-month deal with Warwickshire for 2023 season
Tagenarine Chanderpaul boosts Test hopes with Canberra century
Warner – ‘I’m not a criminal. You should get the right of an appeal’
Imran Khan gives assurances about Rawalpindi Test ahead of planned protest march
Warner back in top five in ODI batting rankings; Conway moves to No. 3 among T20I batters