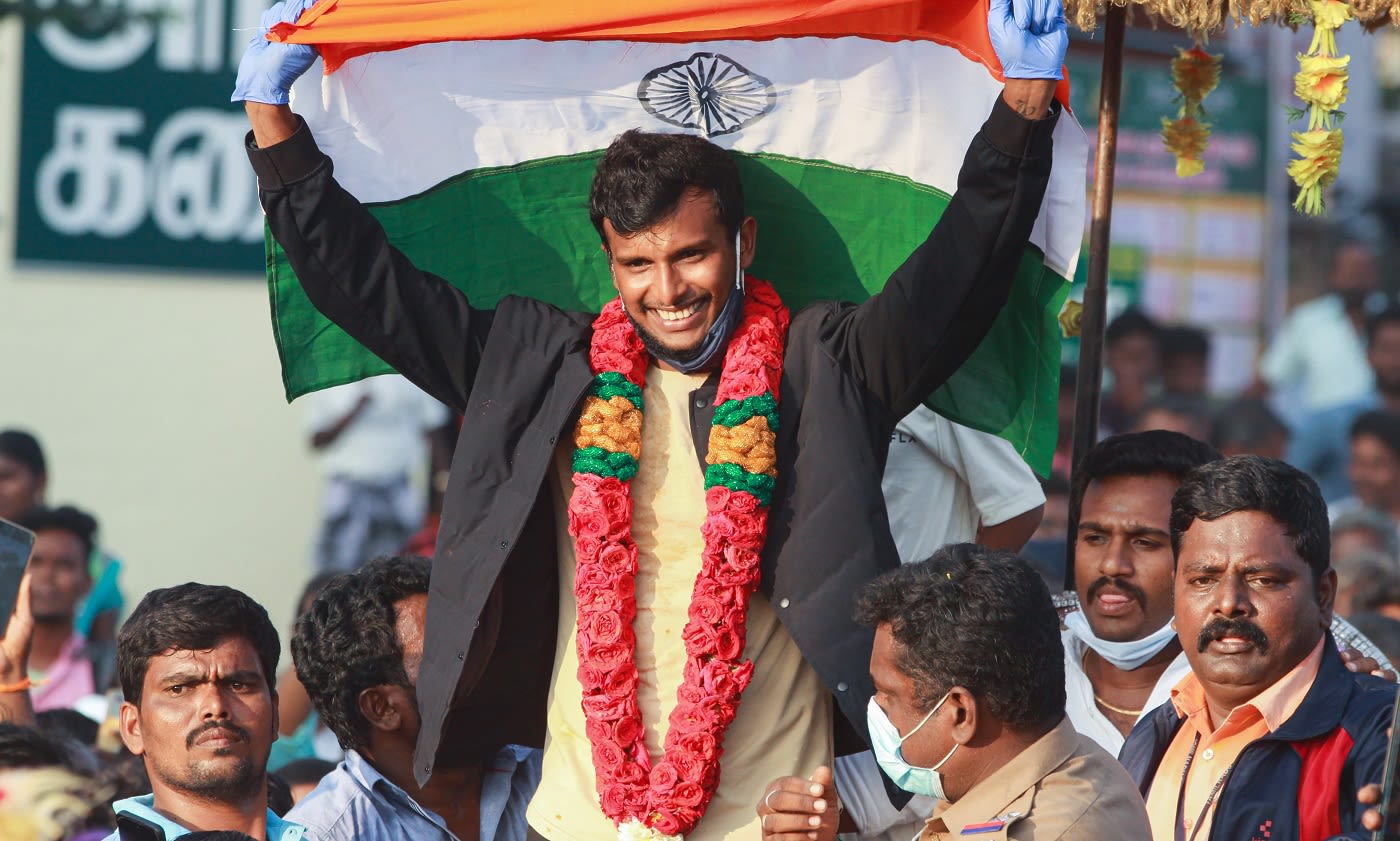 The India left-armer looked back at his fairytale Australia tour, where he made his debut in all three formats

“I’m so happy right now. There’s no limit to it and I just can’t explain that feeling.”

This was India left-arm seamer T Natarajan‘s reaction to his rousing reception at his hometown Chinnappampatti, near Salem in Tamil Nadu, after returning from Australia, where he made his debut in all three formats and played his part in the historic Gabba Test win.

Natarajan, who had seemingly driven down from Bengaluru to Chinnappampatti on Thursday, was greeted by hoardings, drumrolls and firecrackers. After being welcomed back by his mother Shantha, his father Thangarasu and other family members, Natarajan was carried home on a horse-drawn chariot, with everyone in Chinnappampatti wanting a piece of him.

Several people thronged Natarajan’s home for selfies and some even presented him portraits of himself.

On Friday, Natarajan recalled his grand homecoming at a media interaction in Salem. “I never expected to get this kind of a reception. I have to thank the people in my village,” Natarajan said. “It was an unforgettable experience in my life and I dreamt of making it big, hoping to bring recognition to Salem. It’s all god’s grace, and I’m so happy right now. There’s no limit to it and I just can’t describe that feeling. I just feel like being selected for the Australia tour was a gift for me.”

Natarajan was initially picked as a net bowler for the Australian tour, but, as it turned out, he became the first India player to make his international debut across all three formats during the same tour. After an injury to mystery spinner Varun Chakravarthy he was added to the T20I squad and then hours before the ODI series opener he was included in that squad as well, as injury cover. He made his international debut in the third ODI in Canberra and took 2 for 70 in an India win.

“He [David Warner] has tweeted about me and I think he feels proud about me. He has captained me at Sunrisers and during a match he told me that I’m very lucky and told me everything has happened after my daughter was born.”

Natarajan said he felt pressure after he heard the news of his sudden call-up, but at the same time he was keen to prove his talent at the top level.

“I just wanted to do my job,” Natarajan said. “I was suddenly given an opportunity – I didn’t expect to make my one-day debut there [Canberra]. Suddenly they [the management] told me that I would be playing and that was pressure for me. But I wanted to make the best use of this opportunity, so I shifted my focus to that. That [first] wicket and everything that followed seems like a dream to me.”

The dismissal of Marnus Labuschagne was only the beginning of the dream. Natarajan then made his T20I debut, also in Canberra, returning 3 for 30. In all, he picked up a chart-topping six wickets in three games at an economy rate of 6.91.

The T20I series ended with regular captain Virat Kohli handing the trophy to Natarajan and the Test series would end with stand-in captain Ajinkya Rahane passing the Border-Gavaskar Trophy to him as well.

“I never expected it,” Natarajan said. “I didn’t expect Virat Kohli to come over and hand the trophy to me; I was just standing on the side. Kann Kalangitten [I teared up]. When a legend like Kohli came in and gave the trophy over to me it was a great feeling – I can’t describe it.”

Natarajan reckoned that being part of the IPL for four years and exchanging notes with seniors and overseas players smoothed his path to international cricket. He was first snapped up by Kings XI Punjab for INR 3 crore in 2017 and, after spending two seasons on the bench at Sunrisers Hyderabad, he became their gun death bowler in IPL 2020 in the UAE.

“I’ve been part of the IPL for four years,” he said. “At the IPL, I’ve mingled with many foreign players and many Indian players, and communicated with the coaches. Plus, taking tips from the foreign players and the bowlers was useful. Initially, it was difficult for me, but things became better thereafter.”

During the Australia tour, Natarajan got to lock horns with his Sunrisers captain David Warner.

“He has tweeted about me and I think he feels proud about me. He has captained me at Sunrisers and during a match he told me that I’m very lucky and told me everything has happened after my daughter was born. He has had these friendly and emotional chats with me.”

When Natarajan was enjoying a breakout IPL in the UAE, he was probably hoping to return home for the impending birth of his child. However, after being picked in the India white-ball squads, he chose to hang around in Australia for the Test leg as well and improbably made his Test debut in Brisbane.

“It was quite difficult [missing the birth of my child], yes,” he said. “But, for my wife and my family, me representing the country gave them a lot of happiness.”

Having been rested for the upcoming Test series at home against England, Natarajan can now look forward to spending more time with his daughter and rest of the family before the white-ball leg begins on March 12.

Smith feels primed for big summer despite hip niggle
Rain in the air, again, as India look to square series against dynamic New Zealand
Northern demolish Sindh to win Quaid-e-Azam title for the first time
Renshaw nudges the selectors with unbeaten century
At home, and yet not quite – Cameron Green at the centre of unfamiliar homecoming