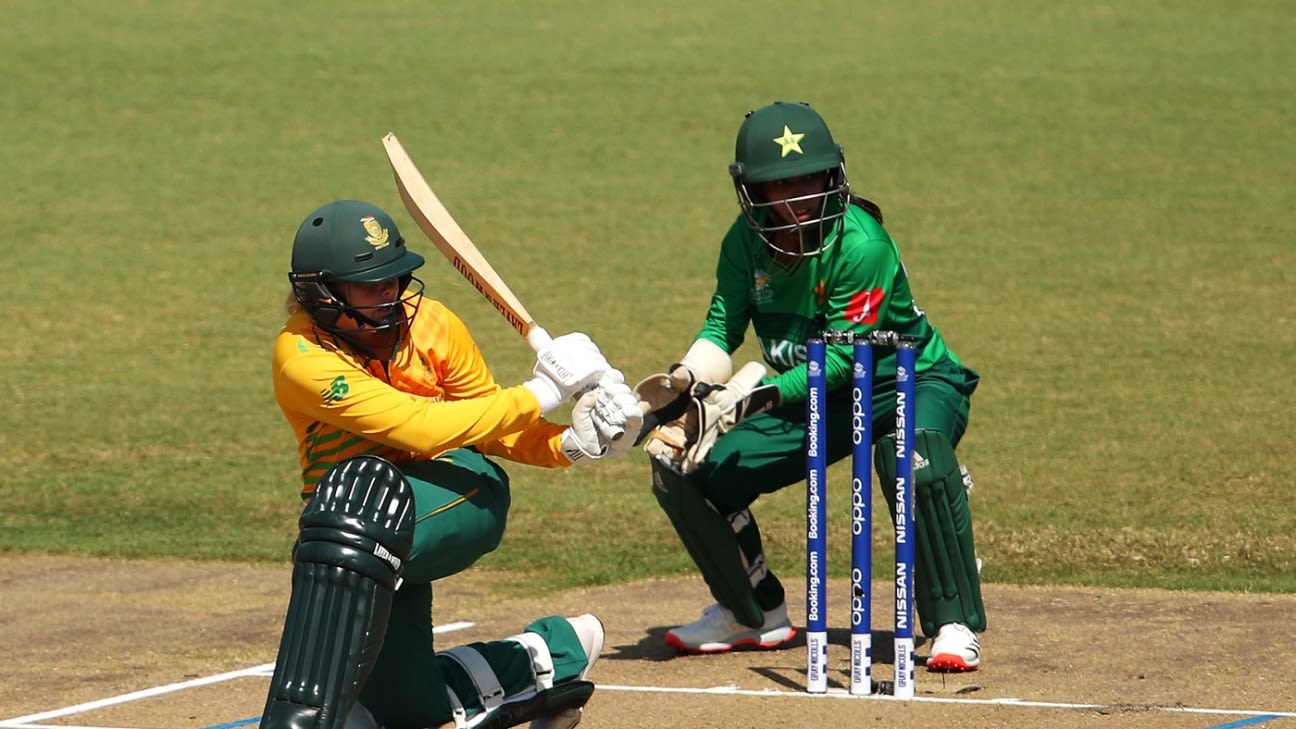 South Africa scored 53 runs in the last five overs of their innings. Pakistan needed 52, and fell 13 runs short of completing their highest successful run chase. The difference was Marizanne Kapp.

She scored 26 runs off the last six balls she faced to finish unbeaten on 68 and took 3 for 44 to ensure South Africa saw off a stern threat from Nida Dar and Aliya Riaz‘s 111-run sixth-wicket partnership and seal the three-match ODI series, having won narrowly in the series opener, too.

Dar scored a second half-century in as many games and Riaz brought up a career-best 81 and between them they took Pakistan from 73 for 5 to 184 for 5. Victory was still a tough task from there, but Riaz acknowledged that “there was no point at which we felt the match would not be won.” Doubtless South Africa’s “shocking” effort in the field, as Kapp put it, would have contributed to Pakistan’s confidence.

Riaz was put down twice in the deep, on 59 and 81 – both simple grabs that should have been taken at long-on. Sidra Nawaz was dropped in the 14th over and several run-out chances were also missed. “I feel like we fall asleep halfway through the match,” Kapp said. “It’s something we have to get better at if we want to be in the top four in the world.” South Africa sit in fourth place at the moment on the ODI rankings.

For Kapp, the ten months of inaction prior to this series helped her refocus her game on her batting, and she is keen to develop into a more formidable allrounder in the team. “Something just clicked. In this last year I took my batting more seriously and decided to give myself more of an opportunity coming in at the back end,” she said. “I’m starting to find my feet. This is just the start. I am starting to really hit the ball well.”

Kapp was also South Africa’s top-scorer in the first match, with 47, and showed her ability to usher a younger player through her innings today. Nadine de Klerk was batting with Kapp in the last 10 overs, and at first played defensively and looked to get off strike with singles at every opportunity. Between overs, Kapp gave her a stern talking to. “I was a bit frustrated with her because I know how good she is,” she said. “I told her to play a strong shot and not be scared.”

De Klerk went from four runs off her first 13 balls to 19 off 21 as she freed up towards the end. With Kapp, she put on 39 runs in six overs and ensured South Africa built a competitive total against a strong Pakistan attack. Diana Baig was again the best of their bowlers, with 2 for 43 from nine overs. She dismissed Lara Goodall and Mignon du Preez and also ran out Laura Wolvaardt to deprive South Africa’s most notable names of the chance for big runs.

Baig also had the chance to make an impact with the bat, after her unbeaten 35 in the first match, when she came in with Pakistan needing 28 runs off 13 balls but tried a reverse paddle off Shabnim Ismail and was caught by a diving Nonkululeko Mlaba. The catch gave Ismail a wicket on an otherwise disappointing performance for her in her 100th ODI. Her 10 overs cost 57 runs.

Ismail appeared to try too hard with the new ball and it was Kapp and Ayabonga Khaka who reduced Pakistan to 73 for 5. Then, Dar and Riaz threatened to take the game away with a strong stand but South Africa’s skills won out, even though they are not at their sharpest. Still, they’ll take the series win, not least because it came on a particularly auspicious day for the team. South Africa played the match in an all-black kit as a gesture of protest against gender-based violence.

Earlier in the day, former men’s captain, Faf du Plessis threw his weight behind the campaign too, especially in light of statistics which show that South Africa has the highest rate of rape in the world.

“It’s really important that we create awareness. It’s not just a women problem in our country. It’s an us problem and we need to be better, especially as males,” du Plessis said. “The stats are ridiculous. I want to make sure I learn as much as I can. The more you speak about it, the more your mouth drops open about what’s going on.”

South African sport has been slow to join anti-racist social-justice movements around the world – and neither the national men’s nor the national women’s team have taken a knee, though both have raised a first as a gesture against inequality – but cricket taking on gender-based violence is a cause they are willing to get behind. Black Day is set to become an annual event, in addition to Pink Day, the men’s ODI that raises awareness about breast cancer.