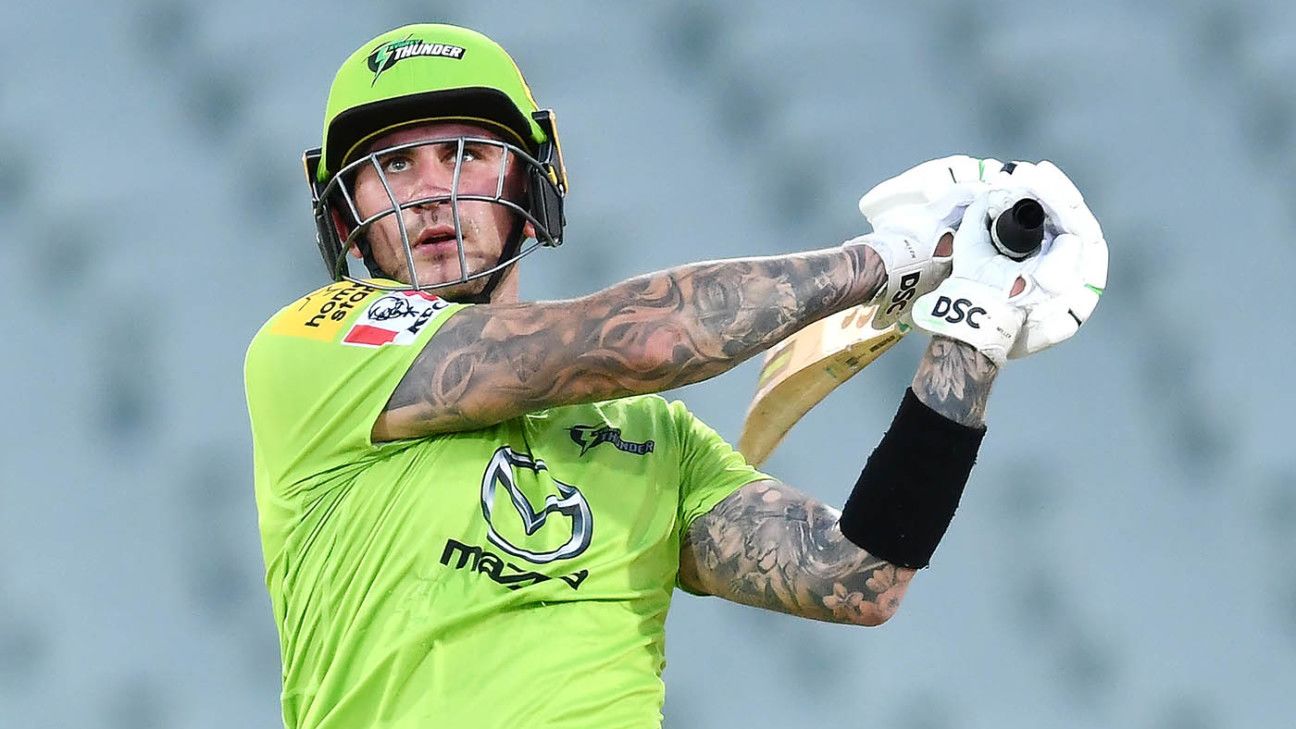 Alex Hales‘ prospects of an England recall remain unchanged, despite his rich vein of form for Sydney Thunder which has propelled him to the top of the Big Bash League’s run-scoring charts.

Hales’ innings of 110 off 56 balls against cross-town rivals Sydney Sixers on Friday night was enough to take him past Josh Philippe in the race for the ‘golden bat’, but he said after the game that he had received no contact from the England selectors ahead of the white-ball tour to India in March which comprises three ODIs and five T20Is.

“No, nothing at all – nothing from that end,” Hales told Fox Sports when asked if he had heard anything from the England management. “At the moment, I’m just enjoying my cricket and I’m going to keep trying to score as many runs as I can, enjoying myself, and see what happens.

“Obviously that’s the peak of cricket, playing for your country. At the moment, I’m just going to focus on the process of scoring runs and enjoying my cricket, and if that’s the end result then brilliant.”

Hales was de-selected from England’s 2019 World Cup squad immediately before the tournament after it came to light that he had returned a second positive test for recreational drugs, and he has not been part of a squad since.

Eoin Morgan, England’s white-ball captain, has repeatedly stressed that Hales’ actions had caused a “breakdown in trust” and demonstrated a “complete disregard” for the team’s values. While he has never officially drawn a line under Hales’ England career, 22 months have passed since his last international appearance.

Hales’ case is not helped by the fact that England are overflowing with top-order options, particularly in T20 cricket. Jonny Bairstow shifted into the middle order in their most recent series with Jason Roy, Jos Buttler and Dawid Malan forming the top three, while players like Tom Banton, Phil Salt and Liam Livingstone missed out on the squad altogether.

And his prospects of a recall were dealt a further blow on Thursday when Ed Smith, the national selector, said that he did not anticipate the situation changing in time for Hales to win a recall for the squads to tour India, leaving his chances of a comeback before the T20 World Cup in India looking slim.

“I think at the moment, I would expect things to stay as they are,” Smith said. “No doors are closed – there’s been no final decision. It’s not that it’s going to be the same indefinitely, but at the moment, if I had to make a prediction, I would say we would stay as we are.”

Smith said that it was an “unfair inference” to suggest Hales would not be picked again under Morgan’s leadership, but stressed the importance of captains’ opinions in the decision-making process.

Instead, Hales is set to play for Islamabad United in the Pakistan Super League from February to March, following the conclusion of the BBL season. His runs helped Karachi Kings to the title in November, but he has been traded back to the franchise he represented in 2018 and 2019 ahead of the 2021 edition.

It is understood that he will enter next month’s IPL auction, and he will hope that his form over the last two years will be enough for a team to pick him up. A handful of overseas openers, including Banton, Roy and Aaron Finch, were released by their franchises this week, boosting his chances of being signed.

Hales is the leading run-scorer around the world in T20 cricket since the start of the 2019 Vitality Blast, averaging 32.21 with a strike rate of 147.93 in that period. He has played more innings than anyone else in that time, across five different leagues, and demonstrated his skill and experience in his belligerent innings on Friday. His hundred – his fourth in T20 cricket – included nine fours and eight sixes, helping the Thunder to break their losing streak as they piled on the highest total in BBL history.

“The last few games hadn’t quite gone to plan so for us to turn up in the Sydney derby was really good,” he said. “It’s about trying to find that balance between which bowlers and which ends to attack, and what stage of the partnership to go at. It’s finding that balance between having that positive intent and not throwing your wicket away, which I’d done a few times this year in the 40s, so to go on and get that big score was really pleasing.”

Ibrahim Zadran Ton Helps Afghanistan Thrash Sri Lanka In ODI Opener
Brendon McCullum: ‘We’ll be pushing for results. If we get outplayed, that’s okay’
Williamson: Guptill will be missed but he has not retired
Jadeja, Dayal ruled out of Bangladesh ODIs
Zampa gets chance to push Test claims in rare Sheffield Shield appearance