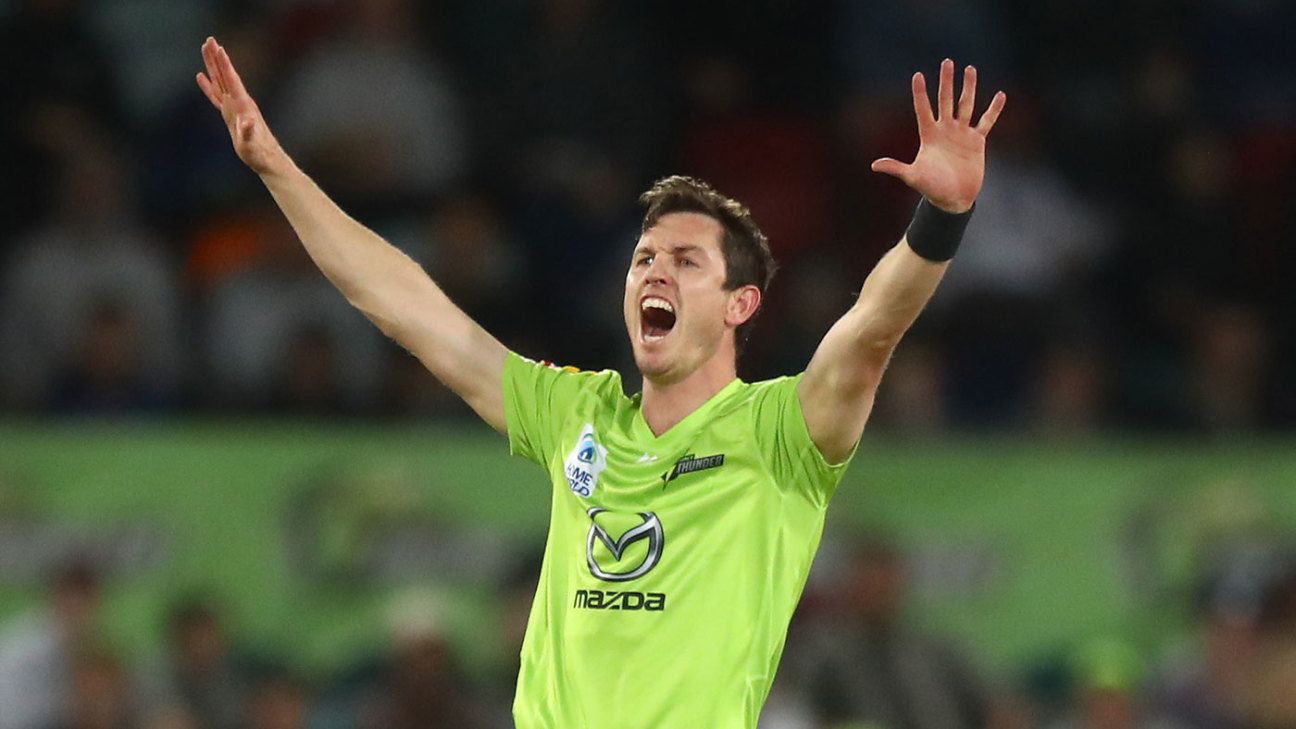 Adam Milne is just happy to put one foot in front of the other at the moment.

He still holds hopes for a return to international cricket with New Zealand, and even dreams of a coveted Test cap, but after 16 months without playing any top-level cricket due to a serious stress fracture in his left ankle, and two subsequent surgeries, playing seven games out of eight in the BBL for Sydney Thunder has been a satisfying achievement in itself as he starts the long climb back towards representing New Zealand again, something he hasn’t done since November 2018.

“First things first, is to keep playing over here and stay fit and healthy and get more games and overs into my body,” Milne told ESPNcricinfo. “I think everyone would love to play Test match cricket. New Zealand has got an amazing battery of fast bowlers at the moment. I think at the moment I’m just keeping pretty level-headed, trying to just stay healthy and play some games.

“I’d love to get back and play for New Zealand in T20 and one-day cricket, and if the chance arose and I was healthy and playing, then Test cricket would be amazing as well. I’ll just take each game as it comes. But playing for New Zealand is still the dream.”

Milne’s return to top-level cricket in the BBL with Sydney Thunder was somewhat of a coup. Having not played since injuring his ankle playing for Kent in the 2019 T20 Blast, Milne was set for a domestic return this summer with Central Districts in New Zealand where he was under contract.

His long-time mentor and Thunder coach Shane Bond called him in October with a proposition to come to Australia and play as the Thunder’s third overseas signing alongside Alex Hales and Sam Billings. It was an offer too good to refuse.

“I probably haven’t taken the wickets that I would love to have taken, but sometimes that’s just the way T20 can go.”

“The Big Bash is seen as one of those tournaments everyone would love to play in,” Milne said. “I sort of just went through the process with Central Districts, saying look I’ve had this offer from Bondy and I’m pretty keen to go but I sort of want to make sure I do the right thing by everyone here. I didn’t want to feel like I was turning my back on New Zealand Cricket and domestic cricket in New Zealand.

“I still have aspirations to play for New Zealand and I still want to play domestic cricket back home but I just felt like the opportunity, having had the last couple of years like I’ve had with injury, was too good to turn down. They understood that and gave me their blessing to go over and talk to the guys at New Zealand Cricket and they were fine with me going over as well. We had to smooth out a few things contractually which they were amazing with and I can’t fault the way they went about it.”

Milne personally spoke with New Zealand coach Gary Stead about the opportunity. Bond’s standing within New Zealand cricket, and Milne’s relationship with him, no doubt helped fill the hierarchy with confidence.

“Working with Bondy has been great,” Milne said. “I worked with him when I was 17 when I first started playing domestic cricket. He was there and helped me through that and then onto the Blackcaps where he became the bowling coach as well.

“He’s made a huge mark on my career and he’s someone that I feel very comfortable bouncing ideas off, just talking to him, little bits about bowling and different ideas and different things about my action. To be able to work with him and learn from him and his experience has been second to none.”

Milne has played seven of eight games for the Thunder, including the last five in a row on a number of different surfaces. His pace has been at trademark levels and his ankle has held up.

“The body is feeling good,” Milne said. “As always with fast bowling, there’s always little bits and pieces and I know my ankle is never going to be like it was when I was 17, but at the moment it’s sort of holding up.

“There’s some different ways of taping it just to try and offload the crunch that I get in the corner of my ankle, just based on the way I land.

“And then just other little bits of treatment. Making sure I’m icing after I’m bowling and trying to keep my ankle mobility. There are little things you can try and do to offload it. At the end of the day, you’re still pounding down at the crease at eight to 10 times your body weight so it’s never ideal. I just try and offload as much as I can.”

Milne has bowled well without much luck. He’s taken just four wickets from 29 overs in the tournament but has been reasonably economical, conceding 7.65 an over as Thunder captain Callum Ferguson has entrusted him with the Powerplays and the Power Surge, as well as the death overs.

“I feel like I haven’t bowled too badly,” Milne said. “I probably haven’t taken the wickets that I would love to have taken, but sometimes that’s just the way T20 can go. You can bowl some good overs and not take wickets but help the other bowlers around you. I feel like I’ve bowled well in parts.

“I’m still forever working on trying to complete my bowling sets and trying to do that and help the team. I feel like I’m heading in the right direction.”

Milne is keen to return to Central Districts next month, after a mandatory 14-day quarantine, and potentially play some first-class cricket again. He will also nominate for the IPL auction having previously spent three seasons at Royal Challengers Bangalore and one with Mumbai Indians.

But his immediate priority is to repay the Thunder’s faith and get them to a second title.

“We’re still really confident in the team we’ve got and the squad we’ve got,” Milne said. “We feel like we probably haven’t played to our ability in the last few games but we showed at the front end of the tournament when we’re all firing, scoring 200 plus, and then being able to bowl teams out.

“We’ve got a lot of different styles of cricketer amongst our team and I think we can play well on most surfaces. It’s about just playing freely.”