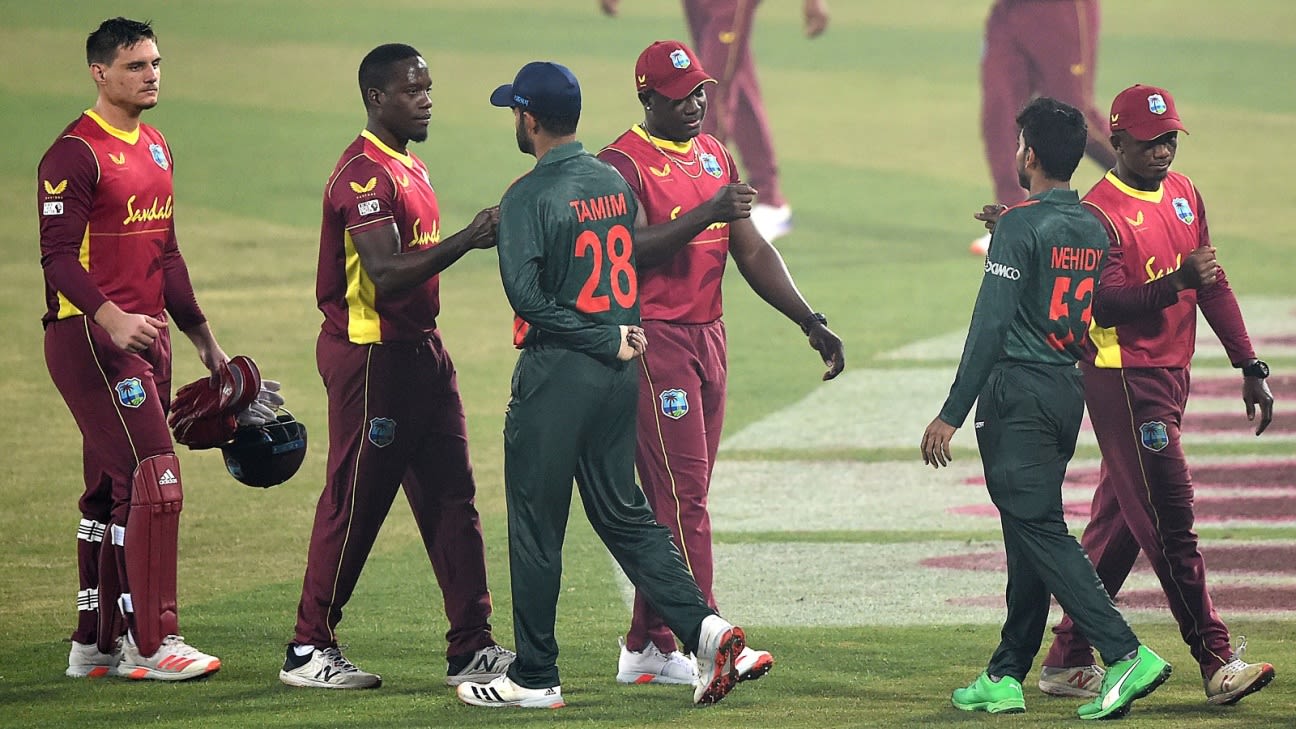 Bangladesh played to their favourites tag in the opening ODI in Dhaka, predictably outplaying the inexperienced West Indies line-up in a six-wicket win. It wasn’t exciting cricket but the home side will take the ten points for the ICC ODI Super League, which helps their approach towards automatic qualification to the 2023 World Cup.

Tamim Iqbal’s ODI captaincy reign started with the win, as did Shakib Al Hasan’s come back with a player-of-the-match performance. Shakib took three wickets in his mean first spell of seven overs, with a slip fielder constant and often employing a silly mid-off and a short-leg. Andre McCarthy, Jason Mohammed and Nkrumah Bonner had no answer to the returning giant, who seems to have added a number of strings to his bow.

But there were other dangers for West Indies too. Mustafizur Rahman got Bangladesh their first two breakthroughs, while Rubel Hossain and Mehidy Hasan Miraz held strong; and debutant Hasan Mahmud took three wickets in the space of nine balls later.

After West Indies were bowled out for 122 runs, Bangladesh took their own sweet time to reach the target, but still had 16.1 overs in hand. It was a justified approach given the long break they’ve had since playing an international match. They didn’t want to get it wrong, neither did they have it easy.

It may not have been awe-inspiring batting, but it should be expected the way the pitch played out. Later both captains Tamim Iqbal and Mohammed said that they had to be patient with the bat; Mohammed acknowledged they needed to bat with more patience during the middle overs.

There’s some promise in the way West Indies batted. Sunil Ambris started positively, debutant Kyle Mayers looked like a free-flowing batsman while captain Mohammed tried to survive through the spin test. If the top six can bat for at least 35 overs, it can free up Rovman Powell to bat his way in the slog overs. But one persisting problem for them would be the really long tail, which Bangladesh exploited quite well in the first game.

The most threatening aspect of Shakib Al Hasan‘s four-wicket haul was his economy and how he kept the West Indies batsmen tied to the crease for long periods. The visitors are going to have a hard time keeping him away for the next three weeks.

Akeal Hosein was West Indies’ glimmer of hope, with his impressive 3-26 on debut. Hosein’s wicket of Liton Das was the way any left-arm spinner would like to start their careers, but the way he carried on for the rest of his 10-over spell, was the most encouraging part.

Seven squad members are warming Bangladesh’s benches but with ODI Super League points up for grabs, it is unlikely that they would make any changes. Mohammad Saifuddin’s fitness update would however keep the team management interested.

It might be too son for Phil Simmons to press the panic button and go for changes, mainly because he doesn’t have a lot of options in the ODI bench.

Both captains said that it was a difficult pitch to bat on, during the first ODI. But with a slightly warmer forecast for Friday, batsmen on both sides can expect a bit of heat to take out the moisture from the surface.

“When he was playing (before his one-year ban), he was the best allrounder in the world. He is one of the best spinners going around. He had a very good spell. We can see that with his figures.”

“You cannot judge anyone after one match. He did well. You can ask this question after one year.”