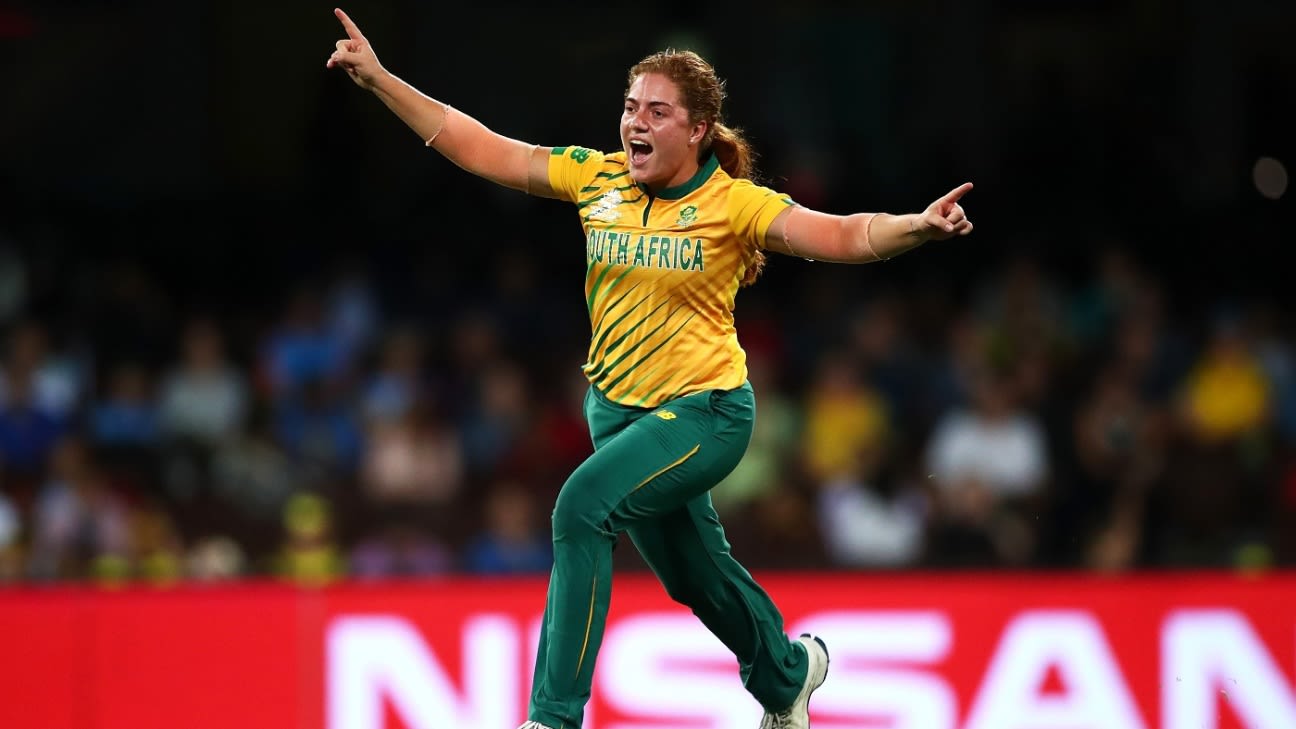 A 60-run ninth wicket partnership took Pakistan to the brink of a comeback victory, but South Africa managed to hold the visitors at bay

Nadine de Klerk defended four runs off the final ball against a Pakistan ninth-wicket pair who shared an unbeaten stand of 60 in a thrilling first ODI at Kingsmead, which saw South Africa eke out a three-run victory.

In an error-riddled fielding affair on both sides, Pakistan were all but out of the chase when they fell to 137 for 8 in the 41st over. But Nida Dar and Diana Baig nibbled away at the target of 201 and took Pakistan to within 23 runs off the last two overs, within 16 runs in the last over and within four runs off the final ball. De Klerk, who turned 21 just four days ago, delivered a full delivery pitching on leg stump which Baig could not get it away.

For Pakistan captain Javeria Khan, it should never have got that close. “We took the game quite deep. I feel it shouldn’t be taken too deep. We should have shown a lot of intent in the middle phase and finished the game in the 45th or 46th over,” she said afterwards.

Pakistan’s chase was slowed after they lost early wickets and found themselves at 42 for 3 midway through the 11th over. Omaima Sohail and Nida scored 29 runs in 81 balls for the fourth-wicket between Sohail was run out. When Sidra Nawaz joined Dar, they managed just seven runs in 17 balls, which meant that Pakistan scored 36 runs from 17.2 overs and fell behind the required run rate of four an over.

Dar and Aliya Riaz rectified that with a 51-run partnership that came in 10.2 overs, including an eight-run solitary over from stand-in captain Suné Luus, but it still needed a big push at the end for Pakistan to reach the target. South Africa showed every sign of letting it slip, with five missed run-out chances and several dropped catches, including putting Baig down in the penultimate over. Luus was the culprit again and let the ball slip through her hands after Baig tried to launch Shabnim Ismail out of the park.

The usually fiery South African quick was livid, but opted not to let it show. Although she described their performance in the field as feeling “a lot like amateur cricket,” she looked past the Luus drop and “stayed positive for the youngsters.”

Particularly for de Klerk, who was tasked with bowling at the death ahead of the hosts’ most experienced campaigner Marizanne Kapp. De Klerk showed immense composure under pressure, especially after being hit for four off the penultimate ball. South Africa will laud de Klerk’s temperament but have acknowledged that their fielding is an area which needs to be improved on ahead of the next match. “That’s one thing that let us down today,” Ismail said.

Pakistan also have areas of concern in that department and Nawaz notably put down Lara Goodall on 0, off Baig. South Africa were 29 for 2 then and a wicket could have seen them collapse cheaply. Instead, Goodall and Laura Wolvaardt shared a 55-run third-wicket stand that put South Africa back on track. Fifteen balls after Goodall was dismissed, Wolvaardt was run out, slow to respond to a call from Mignon du Preez and South Africa reached the halfway stage at 89 for 4.

Du Preez and Kapp put on 64 together, with Kapp top-scoring with 47 off 59 balls., but South Africa’s tail fell away. They lost four wickets for 26 runs, with Baig in action at the end as well, and scrambled their way to 200 in the last over. They would have been happy to reach that total on a pitch that lacked bounce and on which Nashra Sandhu seemed to find some turn, but made hard work of defending it.

The second match in the series will be played on Saturday, in which South Africa will don an all-black kit as part of their campaign against gender-based violence. In this first match, the South African team raised their right fists shortly after the national anthem was sung, in solidarity with injustice and inequality and as a show of anti-racism, as the men’s team did in the first Test against Sri Lanka. Pakistan did not join South Africa in the gesture but ESPNcricinfo understands the PCB assured CSA of their support verbally.