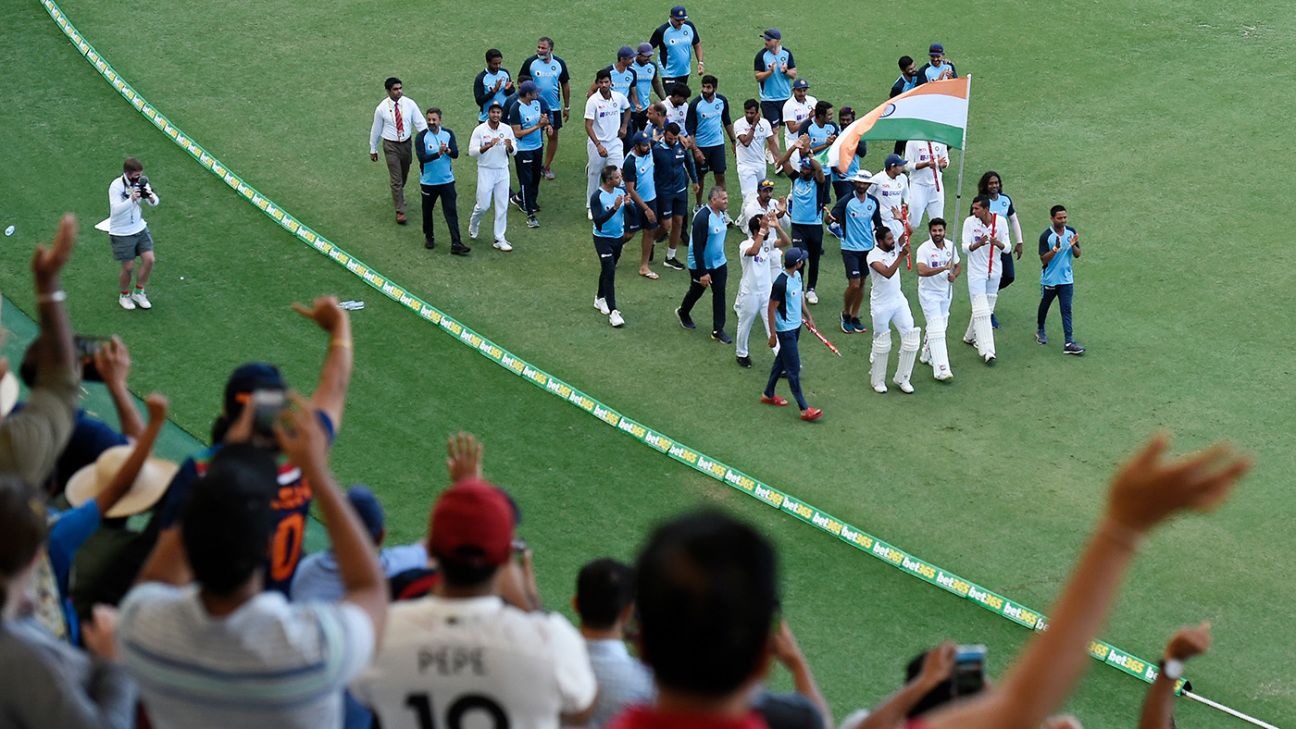 “Feeling defeated is one thing, but giving up is not in our vocabulary.”

That was India coach Ravi Shastri summing up the team’s attitude during their conquest at the Gabba and in the series against Australia as a whole.

The words “unreal”, “unimaginable” and “superb” repeatedly found mention as Shastri opened up on a historic performance: no team had beaten Australia at this ground in 32 years. It was also India’s second-straight series win in Australia, and Shastri termed it their “toughest tour ever”. During the course of his press conference, he also complimented the team for showing the kind of “character” and “personality stamp” Virat Kohli – who’s away on paternity leave – would’ve approved of, and admitted to tearing up after the winning runs were hit.

Ravi Shastri: ‘Giving up is not in our vocabulary’

“This is the toughest tour ever. Playing it in Covid times, [going through] quarantine times and with the multiple injuries, nothing comes close to this,” he said. “I got emotional. I am not someone who generally has tears in his eyes, but this is unreal. What these guys have pulled off will go down in history as one of the greatest series ever played. When you look at the Covid situation and state of injuries and then to show the stomach for a fight after being bowled out for 36 is unimaginable.

“Look at the circumstances in which this team came to Australia – being in lockdown for four-five months, where a lot of people living in metros couldn’t even get out of their flats, leave alone having an opportunity to train. Then to go to the IPL and then come here, take on Australia in their own backyard, where the world knows how tough it is. To go through quarantine, have multiple injuries right through the tour, to be bowled out for 36, our lowest score, and you come back to play like champions – it is unreal. The penny has still not dropped and it will take a long time to drop, but it is unreal. What I’ve seen is unimaginable, the resolve and character the boys have shown is simply superb.”

India entered the final day needing 324 from a possible 98 overs. Shastri offered a peek into the team’s mindset coming into the final day: the possibility of a win wasn’t ruled out, but they plotted their progress “session by session” and decided to not force things. Duly, Shubman Gill set the game up for India with a typically flamboyant 91, alongside the rock-solid Cheteshwar Pujara. Then, they promoted Rishabh Pant to No. 5, ahead of Mayank Agarwal, and by tea, India needed 145 off 37 overs with seven wickets in hand. It was then that they thought victory was possible, especially if Pant batted through. Which he did to finish unbeaten on 89.

“It’s not easy as a captain to go out with a bowling attack that’s just three-Test-matches old, it’s no joke, to marshal the resources and keep everyone going is an outstanding achievement.”

“Right from the very beginning, we had a chat – Jinx [Rahane], myself and the support staff. ‘Let’s play normal cricket. Play your natural game, try and set the game up and not manufacture something. If you have wickets in hand, then you can think about going for it.’ The innings Gill played set the tone. It was outstanding for someone on his first tour. On a bouncy Gabba track to take the attack the way he did got the momentum going. Then there’s Pant. You can’t change his style. In his mind, he was always chasing. You saw him go after the bowling and you knew he had other ideas.”

Terming Pant a “good listener”, Shastri went to lengths to explain that India haven’t tried to change his game, but instead make him aware of the need to play to the situation. “He understands,” Shastri said. “He’s a good listener. He realises what’s his natural game. He knows he has to strike the right balance between caution and aggression. No one wants to change the natural ability of anyone, sometimes you can be reckless and this game teaches you to learn and he’s shown it in both games. He got a 90-odd in Sydney, if he had stayed for another 45 minutes, we would have had another story to tell. He was disappointed and he will learn from that.”

Shastri was effusive in his praise for Rahane, especially in handling the inexperienced bowling attack. “We were left with no choices,” he said of the attack – between them, the bowling group had a combined experience of four Tests, with two of them, Washington Sundar and T Natarajan, debuting.

“There was not a single bowler from the side that beat Australia in Australia last time, so it was important to keep the self-belief going, and Ajinkya did a great job by being calm, composed and taking everything in his stride,” Shastri said. “It’s not easy as a captain to go out with a bowling attack that’s just three-Test-matches old, it’s no joke, to marshal the resources and keep everyone going is an outstanding achievement.

Towards the end of the press conference, there were the typical Shastri one-liners. Asked if the Pujara strike-rate debates should end, he responded with: “Debates can keep going on, we’ll celebrate”. And asked about his role in motivating this team, he said: “There’s no need to make a bigger statement. The cricket speaks for itself.” Indeed, it did.