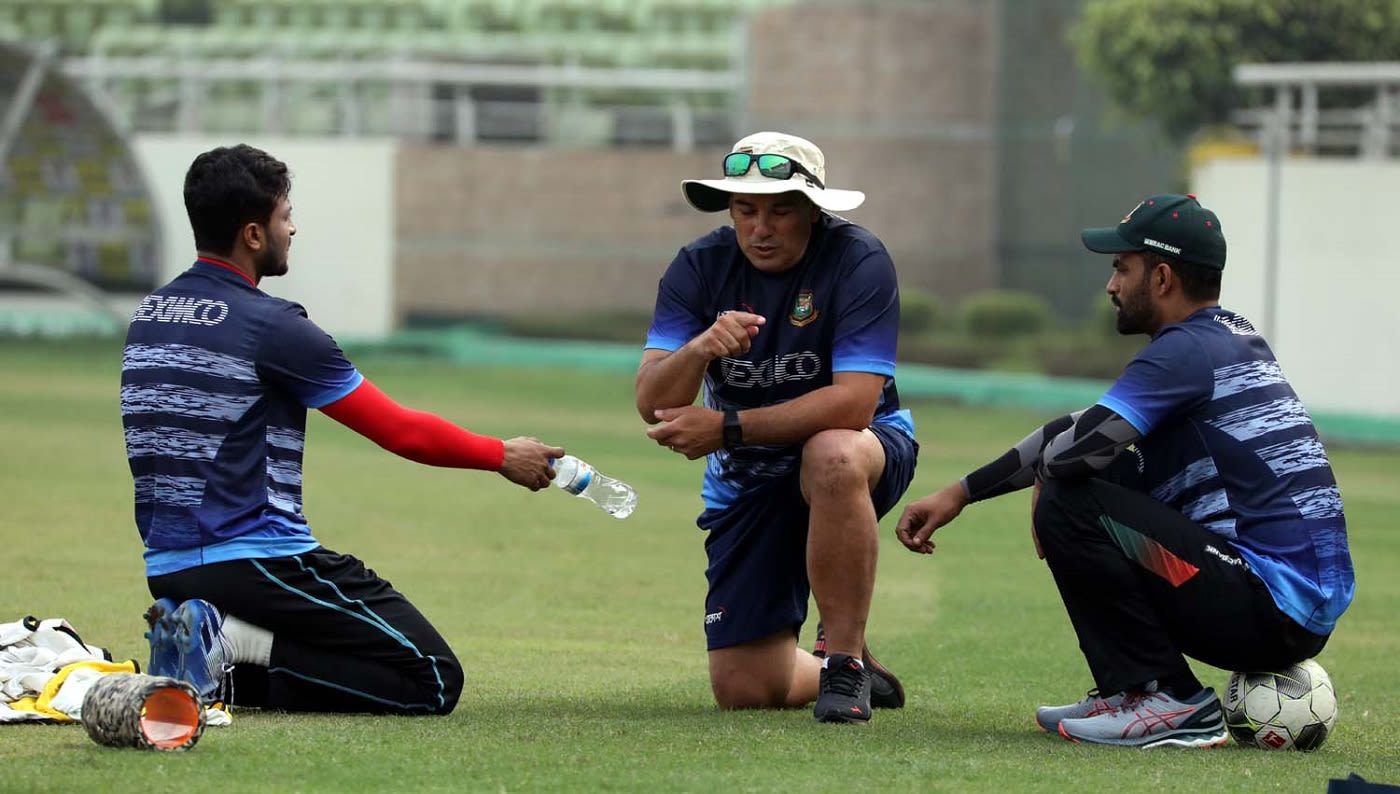 Shakib Al Hasan will be eased back into the thick of things in his comeback series. He will bat in the middle order, and not at No. 3, where he scored two centuries and five fifties at the 2019 World Cup. That spot will now be taken by Najmul Hossain Shanto, a young left-handed batsman who is trying to establish himself in the side.

Since the World Cup, Bangladesh have played only six ODIs but they have already used four batsmen in that position. Shanto has shown good form at that position in Tests against Pakistan and Zimbabwe last year, but he still has a lot to prove in ODIs.

Russell Domingo, the head coach, believes the move not only gives Shakib some breathing space but also ensures the middle order is stocked with his experience, alongside Mushfiqur Rahim and Mahmudullah. It’s an experiment they want to make now, to see if it can be a viable option building into the 2023 World Cup. He confirmed, though, that nothing was set in stone.

“Obviously Shanto has been in really good form,” Domingo said. “He played in the last series against Zimbabwe and we need to make sure that we develop some young batters. In the sub-continent, the top three is the best place to develop young batsmen. It is great to have Shakib back. He had an unbelievable World Cup at No 3.

“At the moment I am probably thinking of having the experienced players of four, five and six being Shakib, Mushfiq and Riyad. It gives us good maturity and experience in the middle-order. We know playing in the sub-continent where the middle-order is so important.

“Shakib hasn’t played international cricket in a while so batting at No. 4 would give him the breathing space coming back into the side. We know he is a world-class player. This batting line-up is not set in stone. There’s a long way to go for the World Cup. We need to look at various options before we settle on a batting line-up.”

Domingo was also quite clear that Soumya Sarkar will now don the role of a finisher, quite different to what he’s done so far. He has batted outside the top six only twice in ODIs and once in a T20I last year.

“At the moment I think the top-order is pretty established with Tamim [Iqbal] and Liton [Das] opening the batting. We want to maybe have a look at Soumya in the middle order. We are trying to find someone that can be a power hitter in the back-end of our innings, and maybe bowl a few overs.

“I know Soumya has always played at the top of the innings. We need to try to find guys who can fit into these roles as the season goes on. By the time we get the World Cup, everybody has played at various roles, and then we can finalise what is our best line-up.

“At the moment we are looking at Soumya to bat in the middle-order and finish games with someone like (Mahmudullah) Riyad. He has experience and he is a clean hitter of the ball. I have a lot of faith in his batting. Hopefully he can put together some good performances.

The only remaining area that begged curiosity is whether Bangladesh will have a pace-heavy attack, or whether they will continue to rely on spin. Domingo said that he wants to play three seamers, particularly with the upcoming New Zealand tour in mind, where he believes Bangladesh won’t play more than one spinner.

“There’s no doubt that we always wanted to play at least three seamers in our 50-over side,” he said. “There’s some exciting young prospects at the moment. Guys like Shoriful [Islam] and Hasan Mahmud. Rubel [Hossain] and Mustafizur [Rahman] have been bowling really well. Taskin [Ahmed] has shown improvement. There’s a whole host of guys pushing for places. We need to make sure we provide them the opportunity to play one-day cricket.

“I think we can’t just be a team that plays spinners all the time. We are going to New Zealand in six weeks’ time. There I can assure you we can play only one spinner so we have to make sure we have seamers who are ready to play international cricket. I can’t see myself playing an ODI without three seamers.”

Domingo however doesn’t want to treat this West Indies series as anything but a competitive one. He said that they have acquired footage of all the uncapped players, who he believes will have a point to prove in Bangladesh.

“(Performance analyst) Shrinivas (Chandrasekaran) has done some pretty good work for us. He has got footage on pretty much all the players from the CPL and domestic one-day tournaments. He managed to get some of those clips for us.

“We have had a look at all the players. They might be an inexperienced international side but a lot of them have played CPL and domestic cricket. They have very good records. We cannot take them for granted. It will be a tough challenge. West Indies is a proud cricket nation.

“These young players will have a point of prove. They want to make sure that they establish themselves in the sides. They’d be very motivated. We have to be on our game from ball one. We can’t expect West Indies to roll over. It will be a hard-fought and close contest. We can’t be complacent going into the series.”