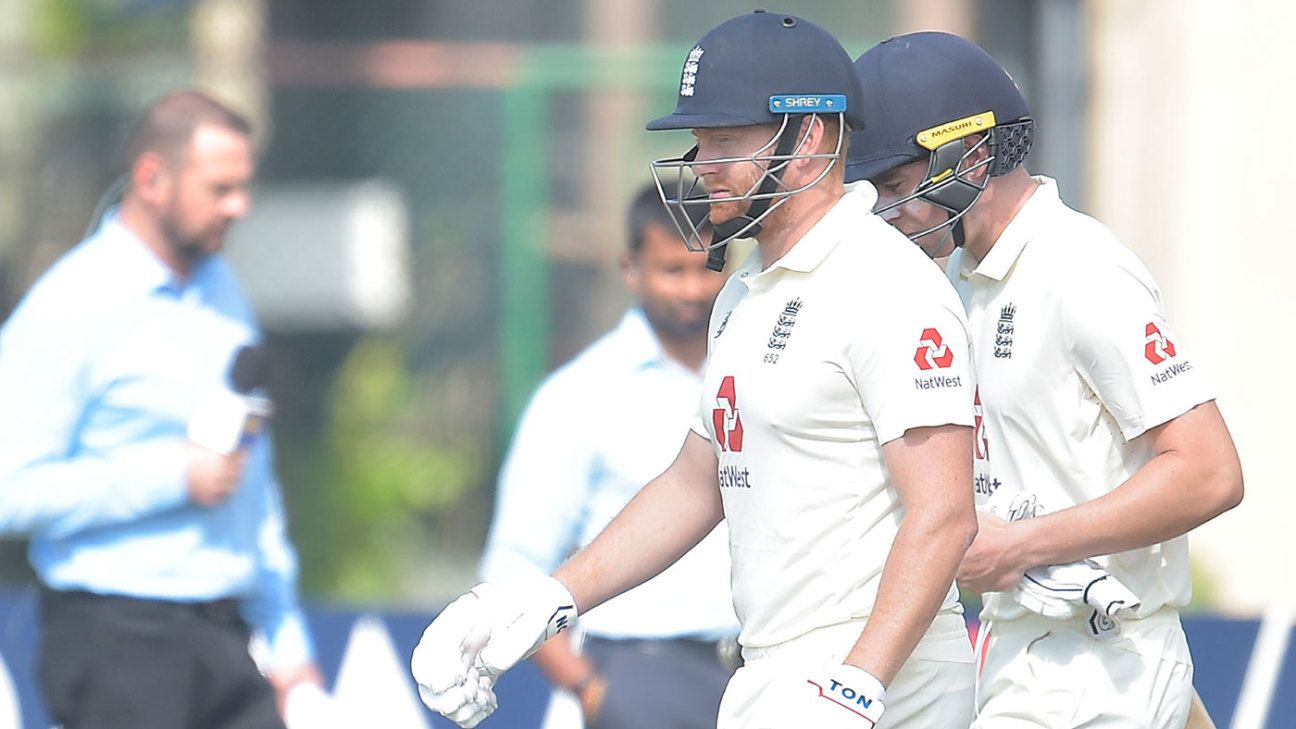 England have won the first Test in Galle by seven wickets.

In the end, it was straightforward enough. Resuming on the final morning with 36 more runs required to win, it took England just 9.2 overs to wrap up victory. Jonny Bairstow settled any nerves that may have been lingering by rocking on to the back foot and cutting Lasith Embuldeniya for four in the second over of the morning, while Dan Lawrence picked off singles with an ease that seemed impossible the previous evening. Together they posted an unbeaten stand of 62 for the fourth wicket with Lawrence providing admirably assured support on debut.

There were a couple of anxious moments. Replays suggested that, had Sri Lanka called for a review when Lawrence, on 9, was hit on the pad by Dilruwan Perera, he would have been given out.

Generally, however, there was little of the anxiety that characterised the frenetic passage of play that ended the fourth day, when, had Bairstow been run-out – as he probably should have been – England would have been 14 for 4.

Ultimately, Sri Lanka were never able to fully repair the damage incurred by their first-innings batting debacle. To be bowled out for 135 when the surface was at its best handed England a significant advantage which they never really allowed to slip.

For England this will be an especially pleasing victory. Going into this match, they had only one day of intra-squad warm-up cricket and had a poor long-term record at the start of series. To see their captain, Joe Root, rediscover his best form with a double-century and their spinners, Dom Bess and Jack Leach, both claim a five-wicket haul. It is believed to be the first time two England spinners have taken five-wicket hauls in the same Test since John Emburey and Derek Underwood achieved it, also in Sri Lanka, in 1982.

It is England’s fourth successive overseas Test victory, following the three that ended their tour of South Africa at the start of 2020. It is the first time England have achieved such a run in away Tests since 1955-57, when they beat New Zealand and South Africa twice each. It is also England’s second successive victory in Galle. Prior to the 2018 tour, they had never won at the ground.

The second and final Test, also in Galle, begins on Friday.

Mooney: ‘The belief in the Australia dressing room is at an unprecedented level’
Rohit Sharma retires hurt with back spasm; BCCI ‘monitoring his progress’
Bronze medal shows New Zealand’s ‘resilience’ – Sophie Devine
Powar says with India ‘evolving’ in T20Is, player roles in the XI will be fluid
Zimbabwe bowl and make five changes to the XI against Bangladesh