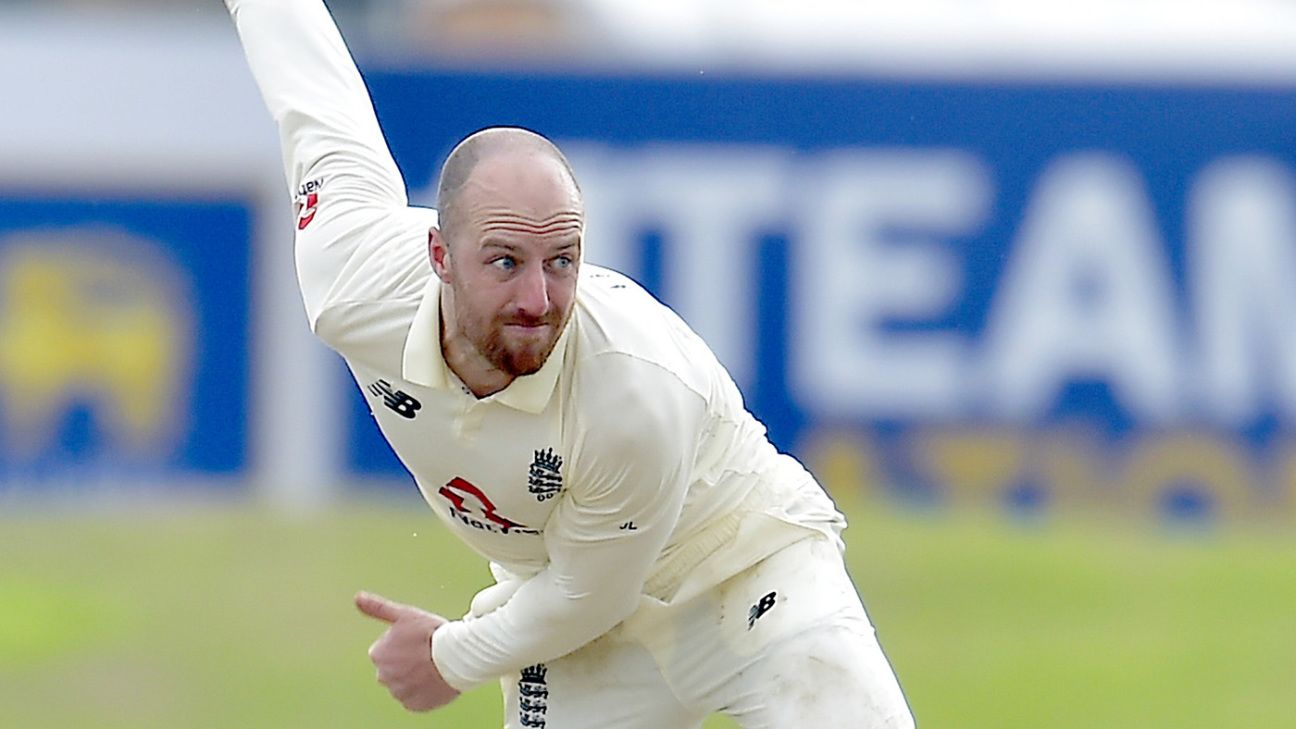 Not even the lure of watching his beloved Liverpool reclaim top spot in the Premier League from arch-rivals Manchester United is likely to deflect Jack Leach from his primary objective tonight – a good night’s sleep. That’s the effect that a hard day’s toil can have on a cricketer in the sweaty, humid conditions at Galle, where Leach’s second-innings haul of 5 for 122 has bowled England to the brink (a few wobbles notwithstanding) of their fourth consecutive Test victory in Sri Lanka.

But in Leach’s case, his fatigue is also the unavoidable upshot of a 14-month battle with illness and inactivity, one which he says has taught him to take nothing for granted in the course of his life and career, and even to allow himself some “leeway” in his preparations, as he builds himself back to full match fitness after bowling just 52 overs in first-class cricket in the whole of 2020.

By the time Sri Lanka’s last man standing, Angelo Mathews, had slashed to slip to complete his side’s second innings on Sunday, Leach had surpassed that overs total by six in the space of four days, for an overall match haul of 6 for 177. But he admitted he was feeling the effects after a year which he described, with typical understatement, as “not ideal”.

“Right now I feel pretty tired,” Leach said. “The body is sore, but I’m just taking it a day at a time – one thing I’ve learned is you never know what is around the corner, so I’m just trying to enjoy each day and see what happens.”

Leach’s awful experiences began on England’s tour of New Zealand in November 2019, where he contracted sepsis and was hospitalised ahead of the second Test in Hamilton. Though he believed he had recovered sufficiently to take part in England’s subsequent tour of South Africa, he was then flown after Christmas, having been hit by a “mystery bug” that did the rounds in the team hotel in Johannesburg.

And then, despite fighting back once again to ready himself for a return to action in Sri Lanka in March, the onset of Covid-19 gave him yet more reason to fear for his career. Though he was a non-playing member of England’s summer Test bubble, Leach last week recalled wondering if he would ever be able to play again, after being categorised as “vulnerable” due to his long-term diagnosis of Crohn’s disease, a condition that impacts the immune system.

“The way I am feeling, I want to fall asleep in about an hour,” he said at the close of play. It’s a big game for Liverpool tonight but I probably won’t be able to stay awake for it. But I am looking forward to waking up in the morning and seeing we have hammered them.”

Leach would doubtless sleep much better if England had managed to wrap up the first Test without alarm. Unfortunately, his fellow left-arm spinner Lasith Embuldeniya sent a jolt of panic through the dressing room as England collapsed to 14 for 3 chasing 74, and the manner in which he consistently threatened England’s top order with flight and bite on and around off stump no doubt contributed to Leach’s belief that he had under-performed for long periods in the match.

And yet, encouragingly for England’s hopes for the rest of their campaign – which consists of next week’s second Test, also in Galle, as well as four Tests in India next month – Leach got better with every spell, as he began to locate the rhythm and pace through the air required to dislodge a batting line-up that proved far more resolute than in their sketchy first innings.

“It is nice to get some wickets on my return,” he said. “But there were definitely some hard periods through that. It was a slow wicket, and this morning I felt I didn’t bowl a great pace, and therefore it was easier for them to get back and create room for themselves. I reflected on that, and when returned, I wanted to bowl a little bit faster and more direct at the area I was trying to bowl.

“I still expect quite a lot from myself and today, yes, it’s nice to have five but I understand I haven’t bowled as I might like this game. It’s got better as the game has gone on, which is a good sign, but I try and use those lows to propel me on to highs and it puts things into perspective. If I’m healthy and fit and able to play, that’s the main thing – I don’t take that for granted.”

Leach will fervently hope that his work for this Test is done. Contrary to his reputation as England’s nightwatchman extraordinaire, he said he had not been padded up during England’s frenetic finish to the day – Jos Buttler had been ready to front up at No. 6 – and though he will forever be famed for his role at No. 11 in helping Ben Stokes seal the 2019 Ashes Test at Headingley, he’s in no mood to test his mettle with the bat once more as England chase a further 36 for victory on the fifth morning.

Instead, he paid tribute to England’s overnight pairing of Jonny Bairstow and the debutant Dan Lawrence, whose unbroken stand of 24 in nine overs restored some order to proceedings.

“We knew what the wicket was doing,” Leach said. “It was obviously big spin and with that new ball, against the Sri Lankan spinners, it was always going to be a tricky period. But I think we have consolidated really well. Jonny and Dan have played really nicely. The way Dan has played on debut has been really great to see. I feel like we can come back and get the remaining runs tomorrow.”

Lawrence is in the midst of an impressive maiden Test, having already contributed to England’s strong position with a first-innings 73. And Leach admitted he was not surprised he had settled into the format so quickly.

“From knowing Dan a little bit from Lions and playing against him in county cricket, I don’t think he feels an awful lot of pressure,” he said. “He is quite a confident guy and he backs his game. To see how proactive he has been against the spinning conditions, and to adapt to those conditions, has been really great to see.”

Leach is not the only spinner to have benefitted from Sri Lanka’s stiffer challenge in the second half of the match. His former Somerset team-mate Dom Bess hoovered up a remarkable five-wicket haul on the opening day, but he too had found a better rhythm in the course of his 33 second-innings overs.

“Wickets give you confidence, for sure, but [so do] long spells,” Leach said. “Trying to get back into that contest of setting guys up and working out the pace of a pitch, and what pace you want to bowl and all those kind of things, so it’s been good so far.

“You can bowl as many overs in the nets as you want but it’s not the same as in the middle, when you do put that extra pressure on yourself,” he added. “You feel it a lot more mentally and physically so it’s been a challenge, but hopefully a good one if we can knock these final runs off tomorrow.”

‘This was a shocker of a wicket’ – Hardik Pandya critical of Lucknow pitch
Kyle Jamieson returns for Test series against England
Ferguson, the unofficial leader of New Zealand’s pace pack
Shreyas Iyer ruled out of first Australia Test
Lucknow curator sacked for ‘shocker of a pitch’ for second India-NZ T20I