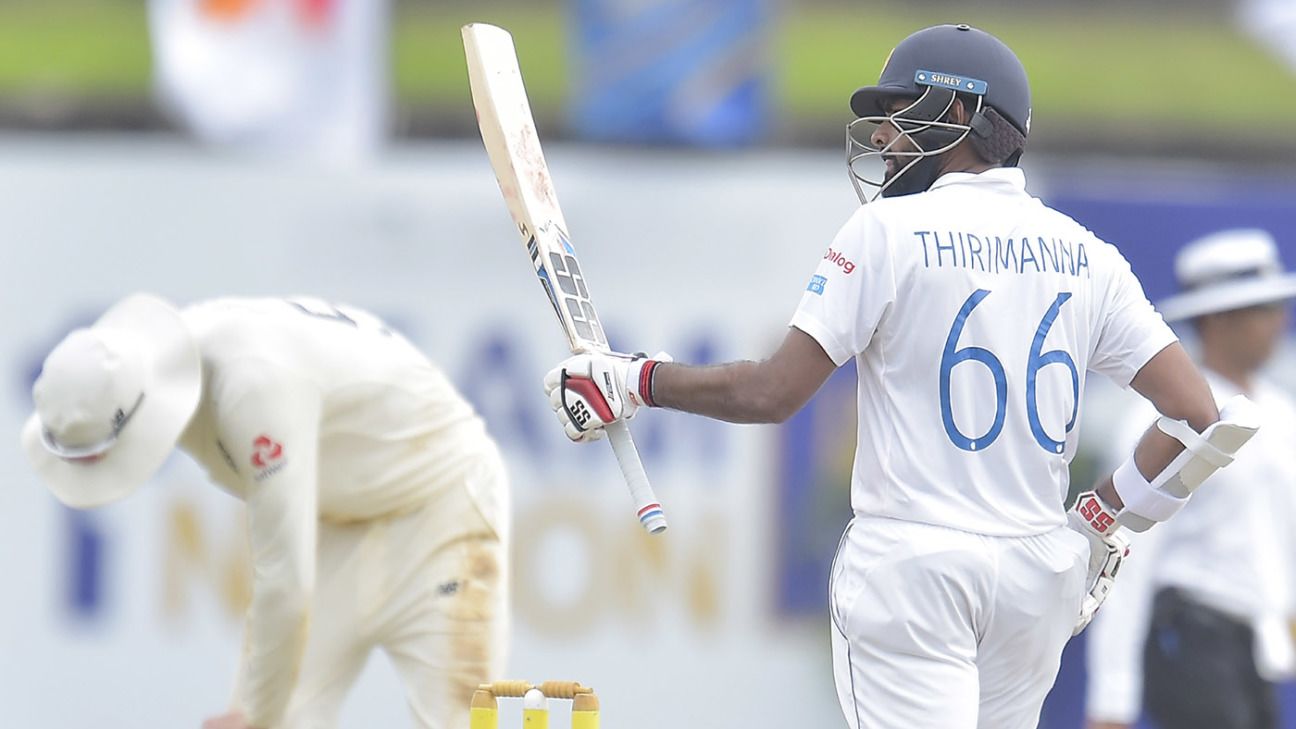 Some players wear expectations of greatness lightly. Eight years and 37 Tests into his career, it is fair to say that Lahiru Thirimanne has not.

In his early years, Thirimanne appeared as he still appears now – mature, measured, responsible, astute, always with that determined look upon his face. Here was a serious young player. That determined scowl rarely leaving his face, “serious” in every sense of the word, in a side whose other young players were free-flowing and fearless (read: flippant).

When Thirimanne bent that knee and sent the ball scorching through cover, as he did on several occasions during his breakout 91 at the SCG eight years ago, the comparisons were hard to resist. The new Kumar Sangakkara?

Angelo Mathews, who was a young captain back then, certainly couldn’t escape being drawn in a few months later: “Thirimanne has the potential to bat at number three in the long term,” Mathews said in 2013. “He has the composure, he’s very calm and he makes good decisions. He’s showed a lot of maturity and he’s got a long future. I’m sure he can be the next Sangakkara.”

At the time, Sangakkara was in the midst of the most extraordinary run of his career, unlocking audacious new strokes in limited-overs cricket, while maintaining his Test-match excellence, but even then, this almost seemed a reasonable expectation. Thirimanne left the ball well when it was swinging, clipped the ball nicely through the legside, seemed unperturbed by the short ball, drove elegantly, and though he did seem to nick off to the ball angled across him – which young left-hander doesn’t?

Until the end of 2015, Thirimanne even began to make good on some of that early promise, if just in limited-overs cricket. He led Sri Lanka to victory with 101 in the 2014 Asia Cup final. Not long after that, he was his team’s top-scorer in the World T20 semi-final against West Indies – a tournamennt Sri Lanka went on to win. He’d get it right in the longest format, eventually, right? I mean, the guy didn’t smile. Clearly his temperament is to play Tests.

But close to seven years later, what do we have? A Test average of 23.57, even counting his ongoing 72 not out in Galle. Now in his 72nd Test innings, Thirimanne has made only 1532 runs, his only century having come against Bangladesh on arguably the flattest pitch Sri Lanka have played on in the past 10 years. Good looking 20-odds ended by a rash stroke, momentum sapping knocks such as his 17 off 58 at Lord’s in 2016, or his 2 off 59 against New Zealand at the P Sara three years later, and overall, a pattern of not only failure to deliver on his early promise, but of failure full stop. Before this Test, no top-order batsman in Test history had played more than 50 innings and averaged fewer than he had.

(Kusal Mendis, who has copped more flak in recent weeks for his series of noughts, has at least produced some great innings. His 176 against Australia was Sri Lanka’s finest in the last decade apart from Kusal Perera’s 153*. He’s also batted out an entire day at the Basin Reserve for a match-saving 141* alongside Angelo Mathews, and later also produced an effervescent 84* to seal a game at Port Elizabeth.)

And yet, Thirimanne has continued to be picked in Sri Lanka’s Test squads, frequently falling out of favour after several low scores, but often making a return to squads depleted by injury, or whenever new selectors are installed. The belief seems to be that Thirimanne had been unfairly shafted by the previous lot who kept moving him around the top order. “We’ll get Thiri right, though, you’ll see.” And so he comes in, plays a few of his attractive-but-brief innings. Then he gets dropped again, and not seen for several months until a new lot comes in, or the team is in a serious slide. Other talented batsmen – Roshen Silva, Sadeera Samarawickrama, and more recently, Pathum Nissanka – must wonder what they have to do to gain this kind of goodwill with Sri Lanka’s cricket establishment.

His knock in Galle has given Sri Lanka hope of making England bat again, if not quite achieving a strong position just yet. He was dropped in the 50s, but has otherwise been solid. For much of this innings he was batting in the slipstream of the more aggressive Perera, though Thirimanne did have pressure heaped upon him when Kusal Mendis arrived at the crease. In this innings, as in general, Thirimanne has just been there… mostly inoffensive, occasionally useful, decent without being extraordinary, and most of all, hinting that he is capable of more without ever taking the game by its collar.

If he goes on to hit his second Test hundred on Sunday, on a difficult pitch, against a decent attack, he will still not have vindicated his selection all these years, so great are the debts he’s racked up. Even in a modest Sri Lanka team, an average of less than 25 is not justifiable over the span of innings he has had the chance to play.

But there remains the possibility of his doing something truly monumental – leading Sri Lanka to a position of strength when they had given up a lead of 286. And because even at the age of 31 he continues to be picked on looks and potential, Sri Lankan cricket almost has no choice but to hope this innings will kickstart the phase of his career that sees him live up to even some of those early expectations.