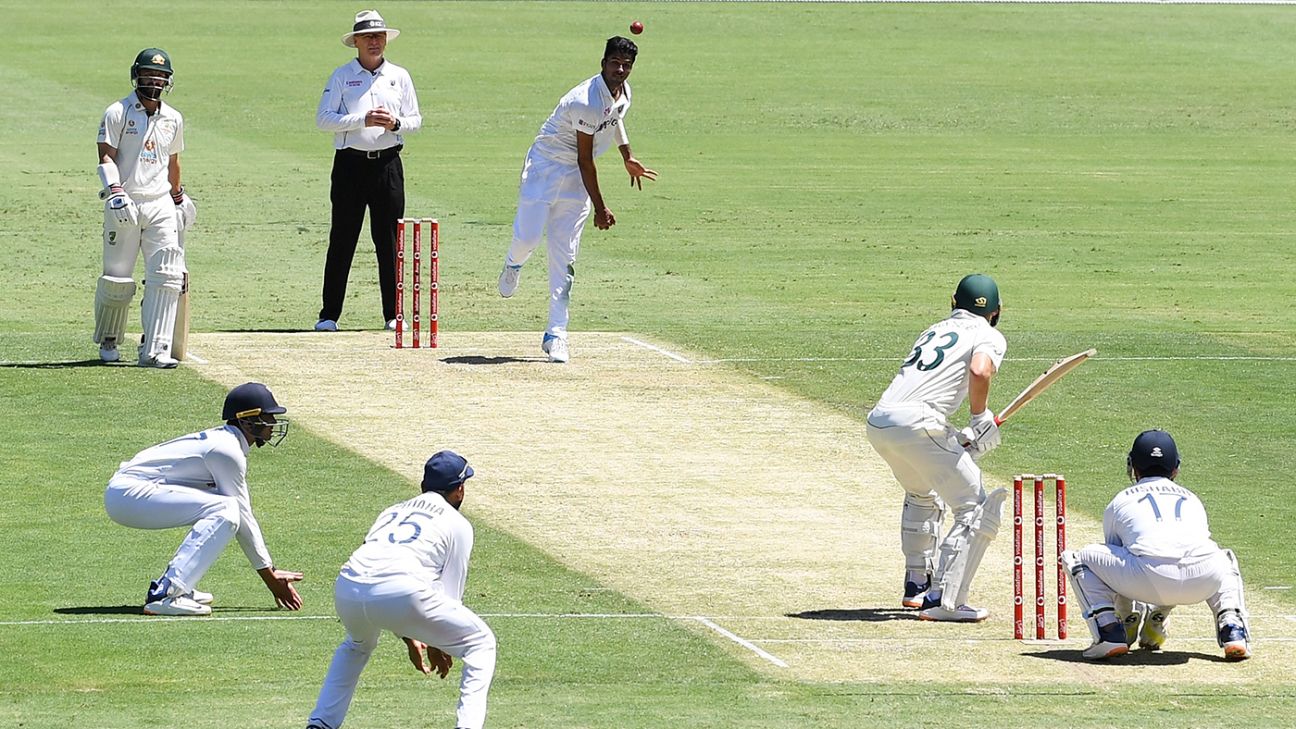 Welcome to our live report of the second day of the Australia-India Test from Brisbane. Join us for updates, analysis and colour. You can find our traditional ball-by-ball commentary here

Australia are collapsing here. Shardul Thakur has been getting the ball to swing away consistently when he’s bowled outside off, but not so much when he’s bowled a straighter line. Pat Cummins ends up playing outside the line of a low full-toss on the stumps, playing for more swing than there was, and he’s hit low on the front pad. He reviews the out decision, and ball-tracking says it would have hit a good chunk of leg stump, but interestingly the predicted path seems to straighten slightly after pitching. For full-tosses, the assumption is that the ball will continue along its initial path. Perhaps there was a hint of late swing just before it hit the pad, and ball-tracking was only extrapolating from that. Australia are 315 for 8.

Doosra? Carrom ball? Outswinging arm ball? From the release, it seemed like none of those, but whatever it was, it pitched within the line of the stumps and left Cameron Green, and he ends up bowled, defending inside the line of the ball. Did that hit a crack? Whatever happened, Australia are now 313 for 7. The release suggested it was just a scrambled-seam offbreak. Straightened off the pitch, grazed the outside edge, and hit middle and leg stumps.

With his third ball of the morning, Washington Sundar finds Cameron Green’s edge. The ball pitches on or around off stump, and Green is stuck on the crease while defending. It doesn’t turn as expected, and the thick edge hits Pant’s thigh and lobs up briefly and agonisingly towards Rahane at slip but falls well short of him.

Tim Paine reaches his fifty with a single in the same over, but he falls to a Shardul Thakur outswinger in the next one, going hard at a drive away from his body and edging to second slip. Australia are 311 for 6 in 99.2 overs. Good reward for Thakur, who’s got the ball to swing consistently all through this innings but has also bowled with better control this morning than he did all of yesterday.

Watching replays now, and Paine really didn’t play that ball well. His front foot went nowhere, and he ended up losing balance and stumbling forwards with his back foot as he reached out to drive.

Tim Paine clips a half-volley from Shardul Thakur to the square leg boundary to bring up the landmark. Paine and Green have added 29 in the first nine overs of the morning without too much fuss. Natarajan has induced one edge from Green, when he looked to drive a wide one, but the ball flew away between second slip and gully. No third slip, but that’s to be expected in the middle of a significant partnership.

Third over of the day, T Natarajan bowls a short ball that slants away from Cameron Green, ending up miles outside off stump. He slashes and misses, and the ball bounces a second time before reaching Rishabh Pant, who’s diving to his right. It hits him on the finger, and the physio comes on for a bit to have a look. He seems okay, though.

Otherwise, the morning so far has been about Green’s driving. He’s about 30 feet tall, he has a big front-foot stride, and he’s standing outside his crease on top of it, to increase his chances of converting good-length balls into drive balls. He hit Natarajan for two glorious fours straight of mid-off in the first over of the day, but he’s also played and missed at a couple outside off. And that big front pad often ends up planted firmly in line with the stumps, so if there’s any inward movement, the lbw is in play. Natarajan tried to angle it into him from left-arm around yesterday, but he’s begun from left-arm over today, no doubt because the ball is still new and he can swing it in, against the angle.

Navdeep Saini hobbled off the field with a groin issue after bowling just 7.5 overs yesterday. The last official word we heard was he had gone for scans. It seems unlikely he’ll bowl today.

9.45 am: Labuschagne rides his luck

Luck has gone Marnus Labuschagne’s way right through this series, and it continued yesterday when Ajinkya Rahane put down a sitter off him at gully, when Australia were 87 for 3. But he batted beautifully to cash in on that fortune, as Dan Brettig observes here.

As a compulsive tinkerer and planner, Labuschagne enjoyed the need to make plans more spontaneously against a less familiar attack, and also on a Brisbane pitch quite unlike any he has seen before.

“Definitely today I had to formulate some plans on the run and keep understanding the situation of what they were doing and I think that’s the part of the game that is really enjoyable, you’ve got to read the situation out there,” he said. “You can look at stuff on a screen and see guys bowl, but only you know out there with the feel of how you can do things and what you can do differently to make life easier out there.”

I particularly enjoyed how he handled Washington Sundar’s leg-stump attack, picking off anything remotely short by rocking back, exposing all his stumps, and punching through the sparsely populated off side.

9.35 am: Can Australia drive home their advantage?

Morning, everyone. Australia are 274 for 5 overnight, and are most likely the happier dressing room at the Gabba. But considering the inexperience running through their injury-ravaged bowling attack, India will be pleased they aren’t entirely out of it yet. Cameron Green and Tim Paine have put on 61, however, and the fate of this Test match may well last in how far Australia’s sixth-wicket pair can extend their partnership.

“With this attack, which was soon reduced to a total experience of three caps, to come out with the scoreboard showing 274 for 5 after losing the toss is a reasonable return”

Suryakumar ‘makes everyone else look so much worse,’ says awestruck Maxwell
Rehan Ahmed could become youngest man to play a Test for England after call-up for Pakistan tour
Williamson: Guptill will be missed but he has not retired
Abrar Ahmed, Mohammad Ali get maiden call-ups for England Tests; Fawad, Hasan, Yasir dropped
Travis Head, David Warner Plunder Centuries As Australia Crush England In Final ODI