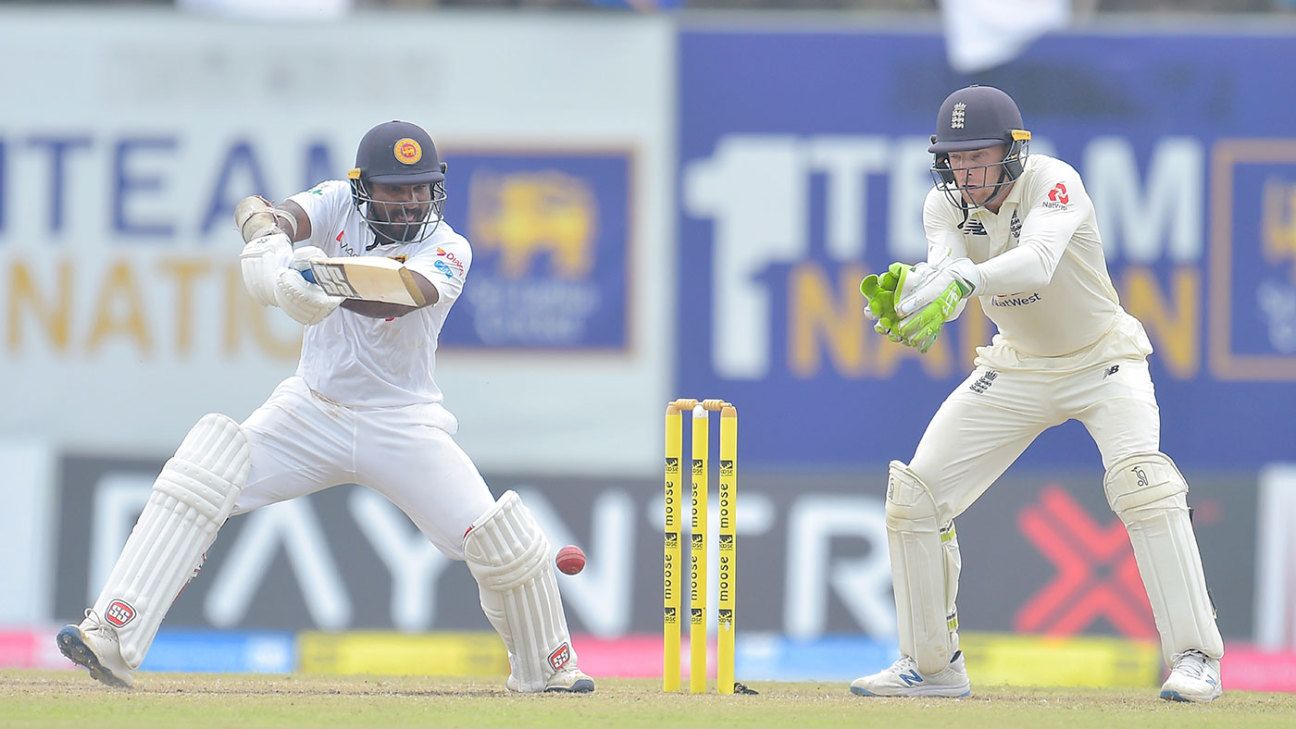 Sri Lanka’s batsmen have made an admirable start to their attempt to save the first Test in Galle.

Starting their second innings with a deficit of 286, their openers batted throughout the afternoon session to reach tea unbeaten. It was the first time a Sri Lanka opening pair has lasted beyond 10 overs in any innings of the three Tests they have played over the last few weeks.

Kusal Perera was particularly impressive in reaching his third half-century in three Tests since being promoted to the opening position. While there was, perhaps, an element of fortune in his first boundary – a flashing drive away from his body and a thick edge fly through the vacant gully area off Sam Curran – he then settled down to play with more calculated aggression.

England might be just a little disappointed with the performance of their spinners, though. On a pitch on which Sri Lanka’s bowlers claimed six wickets in the morning session, England generally failed to find the same bounce or turn. Dom Bess, in particular, struggled to settle into the required line and length and was generally out-bowled by Joe Root’s part-time off-spin. Root drew an edge from Lahiru Thirimanne – the ball flew past gully for two runs – and beat Perera’s outside edge.

Generally, though, Perera looked confident against the spin. Coming down the pitch, he deposited Jack Leach for a straight six over before slog-sweeping the next delivery for four, while Bess – with sweepers out to protect the boundaries – was milked with ease.

Indeed, Perera’s most uncomfortable moment came against Mark Wood. Moments after reaching his half-century, Perera was struck on the right hand as he attempted to evade a well-directed short ball. He looked in some pain and required several minutes’ treatment.

Thirimanne, while less eye-catching, provided steadfast support. After the debacle of their first innings, it is a partnership which will revive Sri Lankan hopes of salvaging a draw from this match. At tea, the deficit had been reduced to 196.

Earlier, Root’s double-century – the fourth of his Test career and his second as captain – helped England take a first-innings lead of 286 by the time they were bowled out on the brink of lunch on the third day.

The ease with which Root amassed his runs might give a somewhat misleading impression about the nature of this pitch. But while Root appeared to find life straightforward – he was last man out, caught on the long-on boundary, attempting to set-up a declaration – it might be noted that only two other men in the match to that point had made more than 30 and the last five in the England side contributed only 17 runs between them. Sri Lanka claimed six wickets in the morning session, making use of a surface, at that stage, was providing generous assistance to the spinners.

Only Wally Hammond (with seven) and Sir Alastair Cook (with five) now have more double-centuries for England. Root’s score here also represents the second-highest score by an England player in Asia after Cook’s 263 not out in Abu Dhabi in 2015.

Root surpassed 8,000 Test runs during the course of the innings. He is the seventh England player to reach the landmark and, in terms of innings (this is his 178th) the second quickest after Kevin Pietersen, who reached the milestone in 176 innings.

Asitha Fernando did provide a brief moment of joy for Sri Lanka, though. The seamer had only bowled nine of the first 100 overs in the innings but, immediately after an out-of-shape ball was changed, he gained some wicked late swing to claim wickets with two successive deliveries.

First he took Buttler’s edge with a full one which left him late, before persuading one to nip back between Sam Curran’s bat and pad to bowl him. Dom Bess negotiated the hat-trick ball securely enough but was run-out shortly afterwards as Root called him through for an impossible single, before Jack Leach was trapped in front by a sharply-turning off-break and Mark Wood miscued an attempted sweep and ballooned a catch to the keeper.

Stuart Broad survived being given out twice in three balls – umpire Kumar Dharmasena was forced to change his decisions after DRS showed neither of his LBW decisions were correct – and responded with successive boundaries off Fernando.

But by then the die was cast. On a pitch that appeared to be offering increasing assistance to spin bowlers, England’s lead had long since stretched beyond the horizon. Sri Lanka had a mountain to climb to save the game but they have, at least, started the journey in assured fashion.

Meanwhile England received a boost off the field with the news that Moeen Ali had been released from isolation and was free to move to the team hotel. Moeen has been quarantined away from the rest of the tour party after testing positive for Covid-19 on arrival in Sri Lanka on January 3. He is unlikely to be considered for selection for the second Test as England take a cautious approach to his recovery.