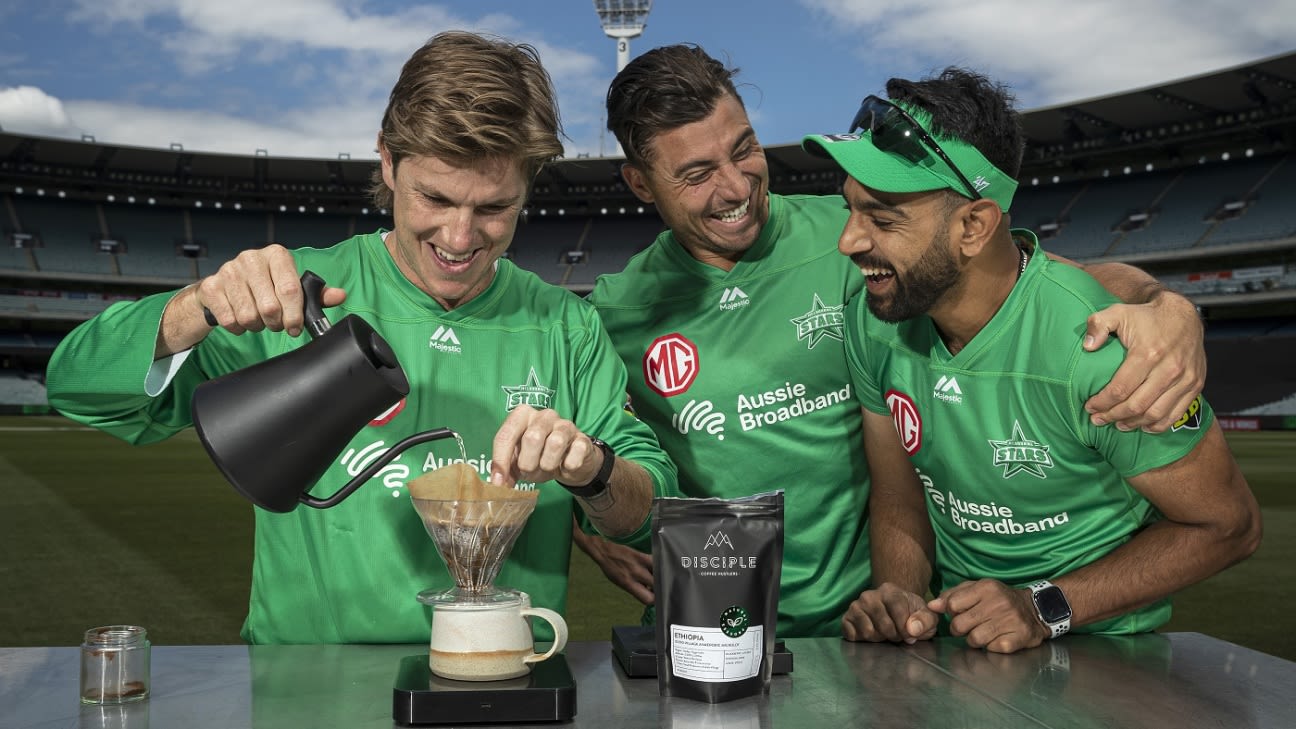 Living in the present and not looking too far ahead is the key to navigating the never-ending hubs professional cricketers are facing during the Covid pandemic, according to Melbourne Stars pair Marcus Stoinis and Adam Zampa.

The relationship between Stoinis and Zampa was a quirky feature of The Test, an eight-part documentary series aired last year on the Australian cricket team’s journey through the 2019 World Cup and Ashes. The pair would meet in Zampa’s room every morning in England, which was dubbed the Love Café, for a hand-made coffee.

As amusing as it was, it is little things like this that have kept the trio sane in this new post-Covid cricket climate.

All three have spent half the year on the road playing in various hubs around the world with different restrictions imposed in different places. Haris Rauf said his 14-day quarantine in New Zealand with Pakistan was “very hard” while the Australian pair endured the same thing on the return from the IPL in the UAE, having previously been in a bio-secure bubble in England dating back to August.

Stoinis and Zampa were able to pinch a week at home with their respective families prior to Christmas but tighter restrictions on the BBL teams since then and a looming T20I tour of New Zealand, featuring another 14-day quarantine looms on the horizon for two of Australia’s first-choice T20 players.

Stoinis said the key to navigating the endless hubs was staying in the present.

“For me personally, I do get in trouble when I do think too far ahead,” he said. “To think forward, which I’m saying we don’t really like to do but you go Big Bash, then you go there’s a New Zealand tour, there’s a South African Test tour, before you know it, you’re back to IPL. And then who knows from there, there’s the Hundred, the Caribbean Premier League, there are all these things so this could easily turn into another hub until next August, which is eight months away from now.

“It can get a bit daunting when you think of it like that. At the moment, I’m just enjoying the little things, enjoying being back at Melbourne, looking forward to playing in front of 15,000 here [at the MCG], looking forward to winning games with the Stars. It sounds cliché but I think that’s all you can do.

“We realise how lucky we are. It’s definitely not a poor me situation. It’s life and you’re lucky you’ve got good friends with you that make it enjoyable.”

The Stars’ indifferent form is only adding the angst. The finalists from each of the last two seasons have lost five of their past six matches and sit second-last on the table after playing their first nine games on the road.

“Cricket is a testing game as it is and then you add the hub, then you add losing games of cricket, you walk up the next morning and you dwell a little bit,” Zampa said.

Zampa can hardly be blamed for the Stars’ malaise. He has been masterful with the ball this season taking 12 wickets at a stunning economy rate of 7.11. That is even more impressive given the difficulty of the overs he has been bowling. Against the Strikers he was claimed 2 for 20 from four, bowling the first over, the 10th when defending just seven runs for the Bash Boost which he did successfully, the 15th over in the Power Surge and the 17th.

“I do really enjoy it, ” Zampa said. “Obviously it’s really nice that Maxy [Glenn Maxwell] backs me in to bowl those overs. So when I’m at the crease I feel really confident to get the job done but tactically, not too much changes. I try and keep things really simple. But I love competition, I love being competitive and I love bowling those overs.”

While Zampa has thrived with the new rules, Stoinis is still trying to work how best to utilise them. He hasn’t reached the heights of last season with the bat but has been a solid contributor. He has been caught betwixt and between as to how to attack the shorter Powerplay at the start while trying to bat deep into the innings and use the Power Surge.

“I’ve been struggling with how I want to go about that in my own head,” Stoinis said. “Even sometimes I’ve forgotten that we’ve got the two overs left in the back 10. An example of that is probably the last game where I was in at the 10th or 11th over and that could have been an option for me to do. But I’m just in my own zone and going at it. There’s still a few tactics that personally I can iron out that will help myself and the team. And the sooner I can do that, the better for the team.”