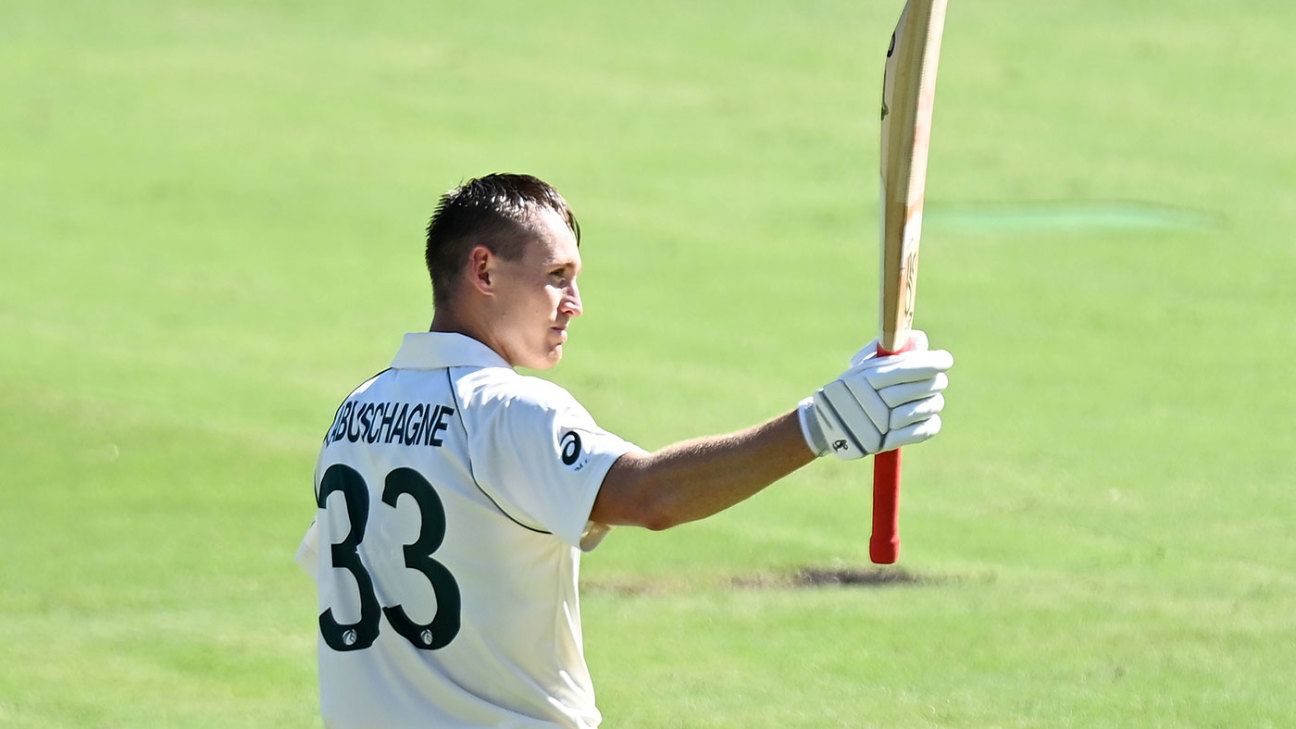 Welcome to our live report of the first day of the Australia-India Test from Brisbane. Join us for updates, analysis and colour. You can find our traditional ball-by-ball commentary here

Australia will be pleased with the day. It didn’t begin particularly well, with two wickets, but India gave them a sniff by dropping Labuschagne early and he’s anchored a positive innings on the day one. India were hamstrung with their best two bowlers going out, and the new faces might have felt like they were doing a decent job until Australia flipped the pressure on them through flowing knocks from Smith, Wade, Green and Paine right at the end. By the end of the day, India looked like a fading team, and the hosts have capitalised on that. India have also ended the day a bowler short. It could be a long day tomorrow.

It’s been a difficult pitch to assess from afar. Natarajan’s two wickets were deliveries that kicked off the surface and got big on two pull shots. The only real instance of that any time previously was the delivery off which Labuschagne was dropped earlier in the day. And these all came off different bowlers, and form differing lines. So what do you put it down to? The range of pace? The likelihood of a bowler getting it to grip? Cracks in the pitch? And in that case, the cracks would have to be on both the left- and right-handers’ sides. Which sounds far fetched so early in a Test. Perhaps the only characteristic that an be gauged confidently is its slow nature.

India left to rue another sequence of missed catches. They got Smith in somewhat fortunate fashion as he flicked a half-volley to Rohit Sharma, but the drops of Labuschagne not along after – one simple one and one half-chance – will grate on them as he sets his sights on a century. There is precedent for fighting back, but you don’t want to be fighting back all the time, especially when it is avoidable. The unavoidables are racking up in any case – Navdeep Saini has complained of groin pain.

India’s injury list starting to rival England’s from the 1994-95 Ashes. Even the physio broke a finger on that tour#AUSvIND

Big Australian names like Ricky Ponting, Allan Border and Glenn McGrath have spoken throughout this series about Australia’s scoring rates, and about their intents. Our stats man Gaurav Sundararaman has been digging around to see how the patterns have been. And he found the numbers from the screenshot above, which are Australia’s scoring rates in various series since the start of 2000. Many of the slowest scoring ones have been over the last few years. A reflection of changing pitches, or the uncertainty they’ve carried with their batting line-ups in that period? Hard to tell, because it’s not limited to Australia – those numbers are pretty much par across teams.

ICYMI: Australia’s squad formed a guard of honour for Nathan Lyon, who’s playing his 100th Test, ahead of the start of the match #AUSvIND

A resurgence from Marnus Labuschagne and Steven Smith to blunt India’s good start with the ball then – with a 48-run stand after India got rid of both Australian openers fairly early on. All bowlers have had a go and, to their credit, have been disciplined even as these two batsmen try to haul the game in Australia’s direction. The boundaries have come, but they have been rare. They look solid, but haven’t been completely dominant. But no one needs reminding that this can change very quickly with Australia’s best two batsmen. Some work to do for the visitors in the second session.

A significant change in bowling personnel has also meant a significant change in bowling plans, it seems. India’s leg-trap, the line that has proved both an attacking and defensive option during the course of this series, hasn’t been on show too much this session. The line seems to have shifted outside off and wider in that direction. Perhaps that is to do with the pace and styles of the bowlers coming in, or it could just be a matter of them not having trained for it alongside the main bowling pack.

Whatever it is, Steven Smith is enjoying it. Particularly against Thakur, off whom he has picked up all five of his boundaries so far.

India came into the Test with two debutants, T Natarajan and Washington Sundar, who were both only on this tour for limited-overs cricket. They stayed on as nets bowlers and with Bumrah, Ashwin, and Jadeja all missing this game, they found spots in the team alongside Shardul Thakur.

This meant that Mohammed Siraj, who debuted in the second Test, was the most experienced bowler in the line-up. And the de facto leader made the early breakthrough, getting Warner for the second time in two Test with one that jagged away in the corridor. Thakur’s innocuous floater into Marcus Harris’ pads, his first ball in Tests since hobbling off after 10 balls on debut in 2018, proved to be a wicket ball. Harris chipped that straight to square leg.

That opening hour is India’s, for sure, and the discipline has been impressive. Now they need to separate Marnus Labuschagne and Steven Smith, who are looking good.

This is a list of Australian opening stands at home, filtered by series and the lowest returns in terms of partnership average. So far, the performance in this series ranks as one of Australia’s worst – ALL TIME – at home. Staggering numbers, considering there was one fifty stand in there.

This is the list of Australian batsman that Siraj has dismissed more than twice in first-class cricket. Some very good names there, and Warner is the latest.

Nathan Lyon: I’ll continue bowling the way I do – with a smile on my face

Australia has always been the land of the legspinner but Lyon has shown the more conventional art can succeed, writes Daniel Brettig in his piece about Nathan Lyon who is set to play 100 Tests for Australia today. Lyon is four wickets away from 400.

My colleague Gaurav Sundararaman has told the story of India’s attack with those words. That is the collective experience of India’s bowling attack today. Ashwin out with back spasm, Bumrah out as expected. Two debutants. India’s fifth, maybe sixth choice bowler in the fast bowling roster, is leading the pack today: Mohammed Siraj, all of two Tests old.

Fun fact: India haven’t had a left-arm seamer in their XI since Zaheer Khan retired in 2014. And here’s a list of the number of players India have used during a series. They haven’t had to use 20 since 1960.

So we have spotted T Natarajan and Washington Sundar being handed caps in the Indian huddle. A big day for the Tamil Nadu team-mates. Natarajan becomes the fastest man to get debuts in all formats after starting off in one – he made an ODI debut on December 2, having not been part of the plans for the series at all until Varun Charkravarthy – another TN player – was injured. He becomes India’s 300th Test player.

Washington Sundar is in the same boat – only around as a nets bowler on this tour but suddenly having to fill in. A decent batsman at the first-class level, apart from his primary skill at bowling offbreaks. We suspect he replaces Ravindra Jadeja in a straight swap.

Good morning and welcome back to our coverage of the final game of an explosive, utterly dramatic series. There’s hardly been a day of this Test series that hasn’t been sustained quality all round. And perhaps the only argument against that is all the peripheral drama on the final day of the Sydney Test; but there have been arguments, non-stop and loud, around all of that for the last few days. Today is the chance to make it all about the sensational cricket again. And there will, perhaps, even a deliberate de-escalation from Tim Paine and his men who hold the advantage in many ways coming into this match; India’s medical table has continued to pile up, so much so that they had to let go of their new-found tradition of naming the XI a day prior to the start. It is touch and go for many big names today – Ashwin, Bumrah, Agarwal. Add to that the fact that his game is at the Gabba, where Australia haven’t lost since 1988. Their prime batsmen are in form again, and their bowlers will be have another crack at a softened batting line-up.

That isn’t to say India are completely out of it, of course. Each time they’ve been down this series, they have proved capable of bouncing back. At 1-1 coming into this game, they are still in possession of the Border-Gavaskar Trophy. And 1-1 is all it’ll need to be for them to hold onto it till the next series. The top order’s getting starts, fifties, and occupying the crease solidly over the last couple of innings – will a century finally come from one of the top three? One of many intriguing questions for after we know the answer to the big one – do they have 12 men on their feet to put on a teamsheet today?

Starc: I have a pretty good relationship with Langer
Both teams unchanged as Afghanistan opt to bat
Gaikwad smashes List A record with seven sixes in 43-run over
‘We are excited about the prospect of playing the WTC final’ – Babar Azam
Rain in the air, again, as India look to square series against dynamic New Zealand