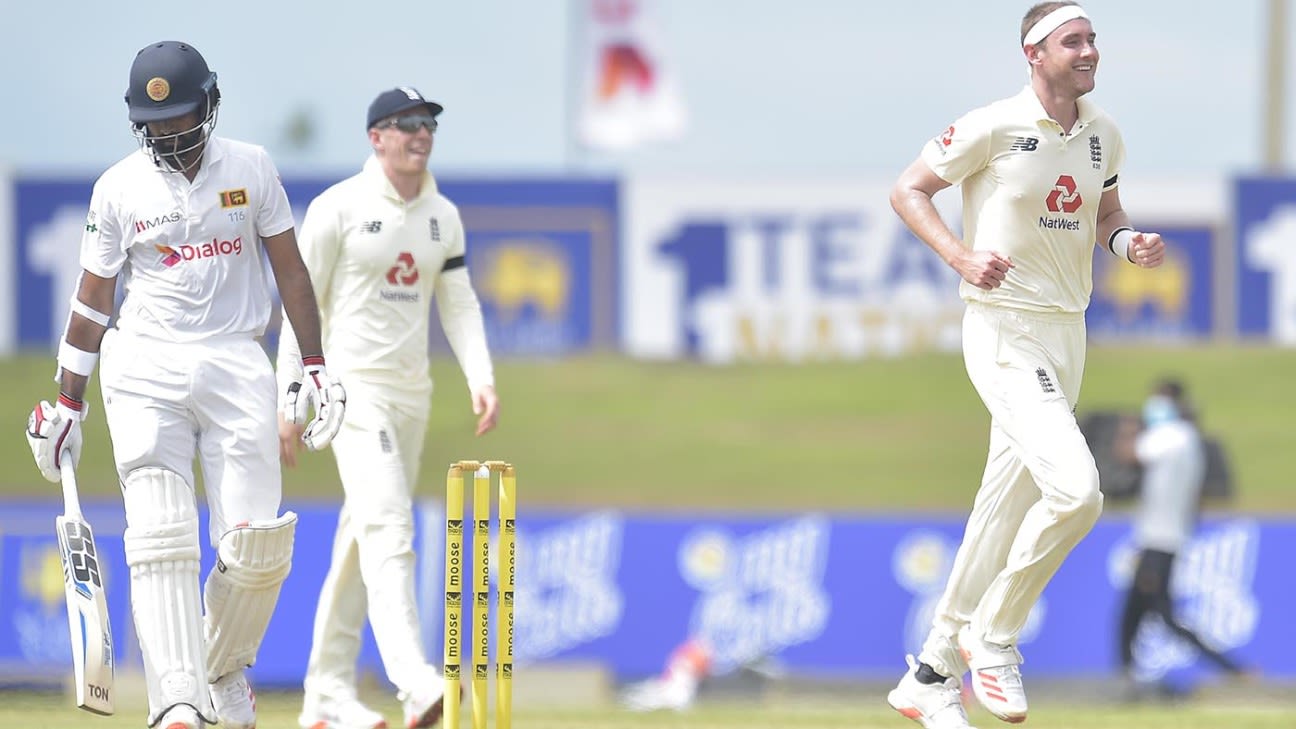 Stuart Broad could have been forgiven if, in the early moments of this Test, he reflected on the wisdom of the phrase ‘careful what you wish for’.

For by then, England had lost what was anticipated to be an important toss and been sentenced to bowl first on a surface expected to deteriorate. And, by then, any hope that England’s seamers might have had that recent unseasonable rain in the region would provide them with some assistance had been dispelled. The ball resolutely refused to budge, off the pitch or in the air, in those opening overs. The pitch looked flat, slow and, for a seamer at least, remorseless.

Might Broad, who had memorably railed against the decision to leave him out of the team at the start of the English international summer, have allowed his mind to drift to the dressing room and wonder whether James Anderson, left out of the side for this game, was the luckier of the veteran pairing?

Probably not. Broad is nothing if not competitive and probably wouldn’t entertain such negative thoughts. And despite going into this match with a gruesome record in Sri Lanka – his three wickets, across three previous tours, had come at a cost of 83 apiece – he used all his experience and all his skill to find a way to contribute.

Within his first eight overs, he had taken as many wickets as in those three previous tours. Recognising that his usual ploy to left-handers – going round the wicket, aiming at off stump, and persuading the odd ball to leave the bat – was not going to work on this surface, he instead started to improvise.

Angling the ball into the left-handers, he was rewarded as Lahiru Thirimanne, attempting to nudge the ball off his hip, succeeded only in guiding the ball to Jonny Bairstow at leg gully, before Kusal Mendis, coming off a gruesome run of form, was drawn into feeling for a cutter outside off stump which gripped and left him just fractionally only two deliveries later. It was Mendis’s fourth successive duck and means he has been dismissed five times from his most recent 13 balls in Test cricket without scoring a run.

While Dinesh Chandimal and Angelo Mathews rebuilt in a stand of 56 for the fourth wicket, Broad’s return after lunch split the pair. Varying his pace relentlessly, he persuaded Mathews to attempt to cut one that was probably both too full and too close to him for the stroke. The resultant edged flashed to slip where Joe Root did well to hold on.

Broad had, on a pitch offering him nothing, made deep inroads into the Sri Lankan batting. Their final total, 135, was the lowest first-innings total in Galle’s history as a Test venue.

But if Broad made the inroads, it was Dom Bess who was the beneficiary. Despite looking some way beneath his best, Bess claimed his second Test five-for – and Test-best figures at this stage of his career – in finishing with 5 for 30.

Sri Lanka, it has to be said, were culpable for several of these dismissals. That’s putting it mildly, really. Their batting was awful. Failing to take advantage of winning the toss, they looked short of confidence and preparation time after recently returning from a drubbing in South Africa.

Kusal Perera, having seen his side lose two wickets in the game’s opening seven overs, reacted to the introduction of spin by attempting to reverse-sweep Bess’s second delivery. Perera’s range of stroke and ability to put pressure on the bowlers is a strength of his game, but this looked an odd – and probably inappropriate – response to his side’s predicament. He succeeded only in scuffing the ball to first slip off his glove.

In truth, Bess will bowl better and finish wicketless. In particular, he struggled to maintain a probing length. But he was the beneficiary again when Niroshan Dickwella, eyes lighting up when he was served the longest of long-hops, somehow managed to slice the ball to point. It was a moment of cricket which might have been more familiar at the lower reaches of a club game though to be fair to both teams, they come into this series having had an unprecedented lack of preparation time.

Perhaps Sri Lanka will reflect that they didn’t enjoy much luck, either. Dasun Shanaka connected nicely with a slog-sweep only to see the ball thump into the ankle of Jonny Bairstow, jumping to evade it at short-leg, and balloon to the keeper, before Lasith Embuldeniya, backing up, was run-out after the bowler, Jack Leach, managed to get a fingertip on Wanindu Hasaranga’s straight drive and the ball deflected into the stumps at the bowler’s end.

Still, when Hasaranga – getting into a horrible position as he attempted a reverse-sweep – was bowled to complete Bess’s five-for, it did sum up a truly wretched display of batting from Sri Lanka. Broad, in particular, bowled with intelligence and Dilruwan Perera might feel he was beaten in the flight by a ball that dipped sharply. But this was just about as soft a batting performance as you will see in Test cricket.

It had been a difficult morning for Sri Lanka even before the toss. Their captain, Dimuth Karunaratne, had been ruled out of the game as the result of a hand injury sustained during the Test series in South Africa. While he had been confident of being fit for this match, it is understood he suffered a recurrence of pain after training the day before the game and was forced to withdraw. His involvement in the second Test must also be in doubt.

By then, England had announced that Dan Lawrence would make his debut. He was presented with his Test cap – number 697 – by his former Essex captain, James Foster, who is with the squad in his role as wicketkeeping consultant. Lawrence did put down a simple chance at cover, off Leach, to reprieve Chandimal on 22. But it didn’t cost England much. Their only concern at the innings break was news that Bairstow had been forced off the pitch with a sore ankle as a result of the Shanaka dismissal.

As expected, England opted for just two specialist spinners, in Bess and Leach, and three seamers. With Ben Stokes, Chris Woakes and Moeen Ali all absent for various reasons and Ben Foakes not selected despite being player of the series on England’s last tour of Sri Lanka, it means there are only four survivors in their team from the side that won in Sri Lanka in 2018. England have lost the first Test in five of their last six series.

The England side wore black armbands in memory of John Edrich, Robin Jackman and Dom Smith, all former England Test cricketers who sadly passed away recently.