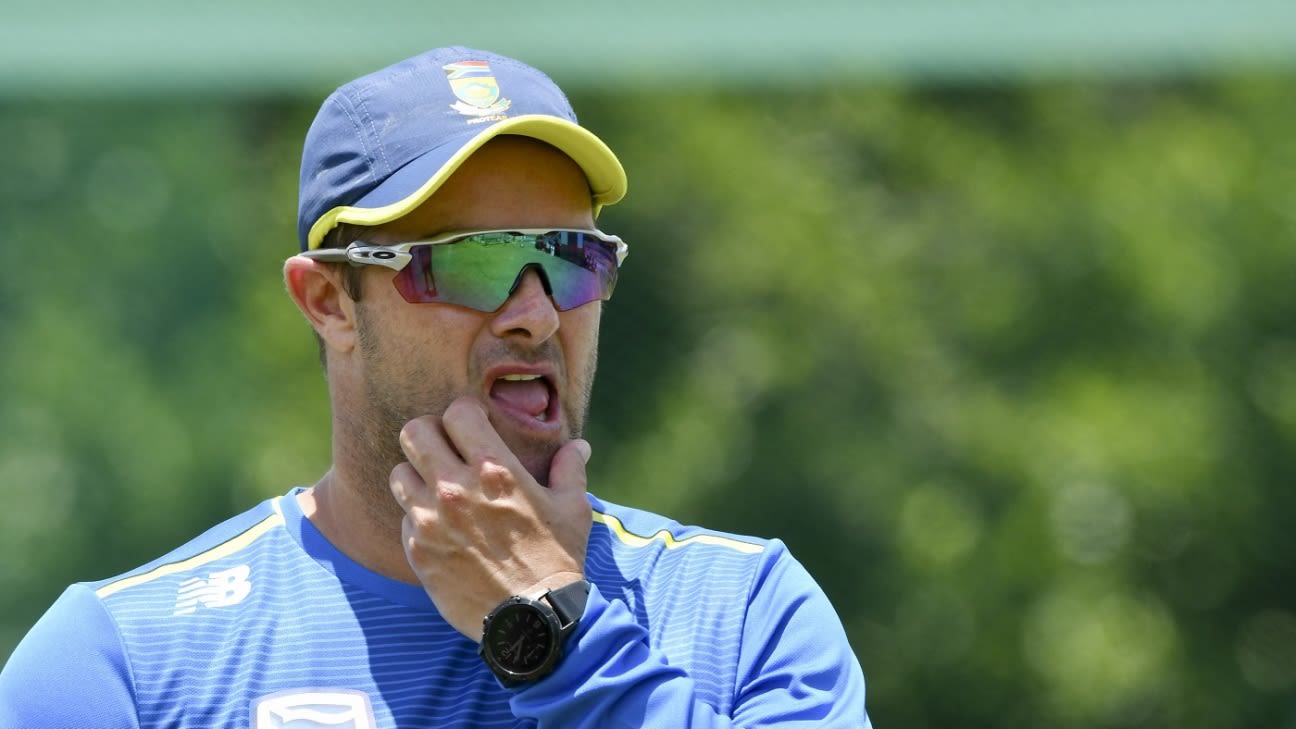 South Africa could be forced to field a second-string T20I side on their upcoming tour of Pakistan as the bulk of the squad will have to return home to prepare for three Tests against Australia.

Although the fixtures and venues for the Australia series are yet to be confirmed, provisional dates have the first Test scheduled to start on February 18, four days after the tour to Pakistan ends. The short turnaround could mean that some red-ball players, including temporary Test captain Quinton de Kock, could return home on February 8, after the second Test, in order to prepare for Australia.

“It won’t be our strongest team because the emphasis is on Test cricket against Australia, rightly so. It might be a watered-down T20 team,” Mark Boucher, South Africa’s coach, said. “And that’s not a bad thing. At the start of the season, I alluded to the fact that we are going to have to use a lot of players. This is an opportunity for guys to put their hands up. We haven’t played a lot of cricket, there haven’t been a lot of A tours and even though it’s not ideal to throw guys into the deep end and make them play international cricket when they are maybe not ready, there are not many other choices at the moment. Some will be pushed into the deep end and we will see how they respond.”

“During Covid times you need to be careful with how you look at the ball. There are always legal ways of scuffing up one side to try and get reverse swing but a lot of our bowlers have never had to deal with reverse swing.”

South Africa are yet to name their T20I squad, whose first match in Lahore is on February 11, but with the T20 World Cup in mind, they may want to field several players from the Test squad such as de Kock, Faf du Plessis, Temba Bavuma, Wiaan Mulder, Dwaine Pretorius, Kagiso Rabada, Lungi Ngidi, Anrich Nortje, Tabraiz Shamsi and George Linde. However, as teams such as England and Australia have experienced in the past, they may have to settle for having two very different squads as they navigate a packed schedule in the time of the coronavirus pandemic.

The same will apply to the team management, with Boucher preparing to return home with the Test players and assistant coach Enoch Nkwe due to remain in Pakistan with the T20I squad. “The initial talk was that Enoch might stay over in Pakistan and finish off the series and I will come back. We are trying to split the management as well as we can to show the importance of both series,” Boucher said. “We are preparing for most of our management to come back and one or two of them staying over.”

A final decision will be made once South Africa’s schedule against Australia is confirmed. By then, the Test squad will be ensconced in a security and bio-secure bubble in Pakistan, which could see them confined to just one floor of a hotel, although options for some recreational activities are being looked into. “Our security officers are looking at a club that is next door to the hotel where there is a pool, a gym and a field the guys can get out to and run around a bit,” Boucher said. “But we are used to spending time in hotels almost in lockdown scenarios when you tour the subcontinent. We have got a games room to keep the guys interested. And Netflix has become a bit of a winner as well with guys lying around in the room and watching a few things.”

The trip is South Africa’s first to Pakistan since 2007. In the 14 years since, only du Plessis from the current squad has played in Pakistan, when he captained the World XI and in the most recent edition of the PSL, and likened it to being in “a movie,” because of the security arrangements. South Africa expect a similar situation in the upcoming tour and are comfortable that there is no risk to their safety following a comprehensive review by their security team.

“It’s very important that we get playing in Pakistan. But in saying that is a major concern. I don’t like to micromanage. Guys have to gone and done a recce of the situation and they’ve come back and said it’s safe,” Boucher said. “We trust that the right decisions will get made if something does happen. They’ve assured us they will look after us as well. We are getting state security, which is good for us.”

As for the actual cricket, Boucher will have as good an insight on what to expect as anyone, having been part of the last South African squad to play in Pakistan. He remembers it being a place of “tough cricket and different to other subcontinent countries. When you go to India, the ball turns a lot. In Pakistan, we haven’t been in games where the ball turns a lot. It’s conducive to fast bowling,” he said. “It’s very flat and guys will go with pace a lot. Reverse swing was very big in those days. The rules and regulations are a lot tighter nowadays for getting the ball to reverse, so I don’t know if we will see too much of it.”

With Covid-19 protocols disallowing players from using saliva to shine the ball, both teams will seek other ways of finding reverse swing, although Boucher cautioned it is not an art the younger crop of South African bowlers are well-versed in. “During Covid times you need to be careful with how you look at the ball. There are always legal ways of scuffing up one side to try and get reverse swing but a lot of our bowlers have never had to deal with reverse swing,” he said. “In the franchise system, if you go to places where you feel reverse swing is going to be important, we scuff one end and guys can’t control it because they don’t usually bowl it. It will be a good lesson for our guys as well. KG (Rabada) has bowled really well with the reverse-swinging ball so he will be immense. And we’ve got a bowling coach (Charl Langeveldt) who was the master of it. I feel very comfortable that he will make some good calls with regards to getting it right.”

On the other hand, South Africa’s batsmen are gearing up for a challenge many of them will not have encountered before. “They are historically flat wickets. Having spoken to [former Pakistan coach] Mickey Arthur after the Sri Lankan series, he alluded to the facts that the wickets are very good for batting,” Boucher said. “But it’s something completely different – the areas you score in are different, the bowler bowl straighter lines, the ball starts to reverse a bit. A lot of our batters would never have seen that, especially being a young group. There is a lot of adapting to conditions but we are well aware of the technical adjustments we need to make as batters in order to succeed there.”