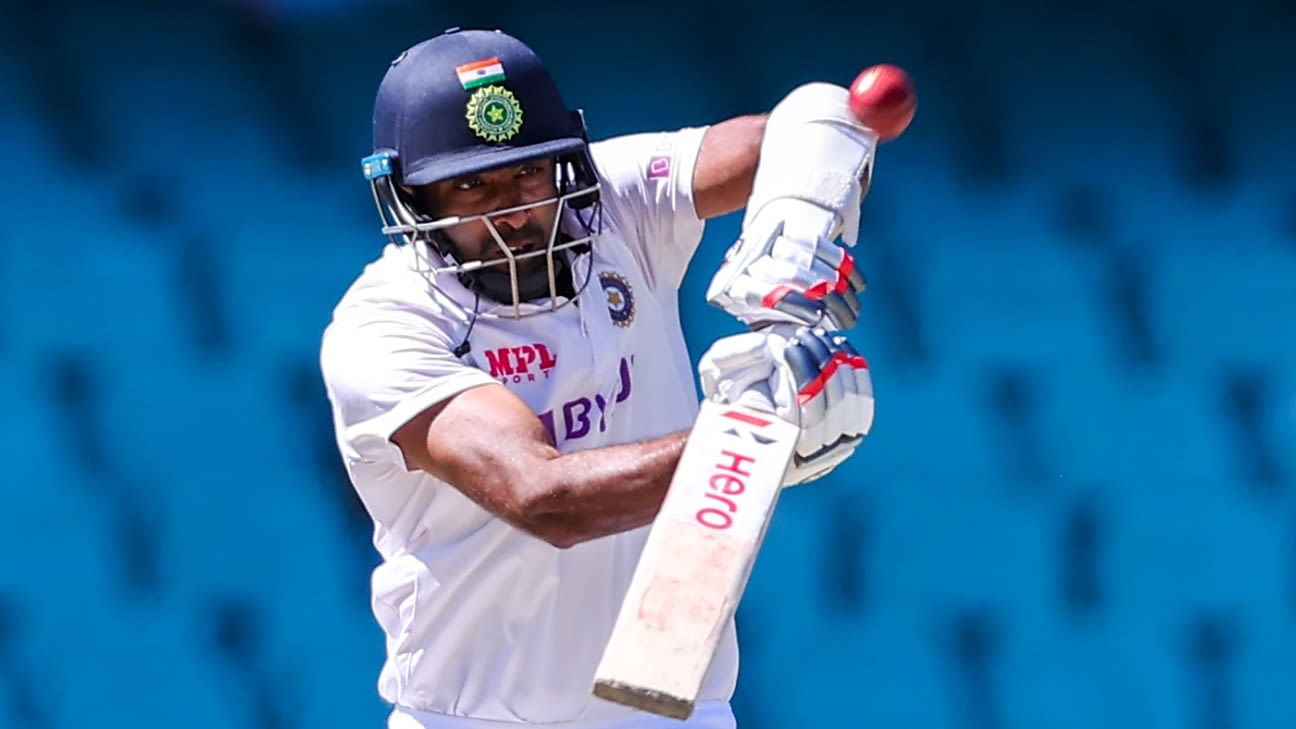 R Ashwin was crawling on the floor in pain, and unable to get up or bend, on the morning of the fifth day of the Sydney Test. His wife Prithi Narayanan, writing in the Indian Express, said she had never seen him like this.

Ashwin ended the day on an unbeaten 128-ball 39 and, with Hanuma Vihari, put on an unbroken stand of 62 off 259 balls to help India save the Test. But he later revealed he had tweaked his back the previous evening and is a doubt for the final Test at the Gabba, which starts on Friday.

In the article, Prithi, who was in the same hotel with their two daughters, revealed the extent of his pain. “He has a high threshold for it, but I had never seen him like this,” she wrote. “He was crawling on the floor. He couldn’t get up or bend down. I couldn’t imagine how he was going to play…As he was about to leave, he said, ‘I have to play. I have to get this done’.”

She said the first signs of trouble had come the previous evening, at the end of the fourth day’s play. “I had seen him on television in some sort of pain a couple of times. ‘Are you fine, physically?’ I asked him and he shot back, ‘Didn’t you see me bowl?!’ and said he felt he had a tweak in the back that was beginning to hurt. He felt during warm-ups that morning that he stepped awkwardly and did something to his back. It had slowly begun to act up as the day progressed.”

Prithi wrote that on match nights she and their daughters stay in a separate room and when she woke up in the morning, Ashwin’s pain was “really bad”. He told her he “had to crawl to the physio room,” which was next door. “He couldn’t bend, straighten, or get up after sitting. I was shocked. I had not seen him like this before.

The man went to bed last night with a terrible back tweak and in unbelievable pain. He could not stand up straight when he woke up this morning. Could not bend down to tie his shoe laces. I am amazed at what @ashwinravi99 pulled off today.

“‘What are you going to do? How can you bat?’ I asked. ‘I don’t know. I will figure out. Just let me get to the ground,’ he replied…Even after he left us, to be frank, I was half-expecting a call in a couple of hours from someone in the team that he had been taken to hospital for scans.”

The only light moments came from their daughters, both younger than six. The younger daughter, observing her father’s pain, told him: “Put leave, appa (take the day off).” Prithi said she joined in the jesting, telling him, “Ask for a snack break in two hours and come back – like kids do at school” and Ash went, ‘Overaaa Oturrey!’ (You are pulling my leg a bit too much!).”

She said she watched the day’s play on TV and understood her husband’s physical state. “I could see Ashwin standing in the dressing room corridor or pacing up and down on television. I knew it must be the pain because he feared if he sat down, he couldn’t get up. That racked my worries a bit. ‘So, he isn’t better. Haven’t the painkillers kicked in yet? Why can’t they be more effective?’ – such thoughts flitted through my head.”

Watching him bat, though, she could see he was in the zone, was as fraught for her because he was hit a couple of times, on the chest and the hands. He began to respond to Australia captain Tim Paine’s comments, which she said was unusual for him. But as the match progressed and Ashwin and Vihari took charge, she smiled as she heard them converse in Tamil.

When Ashwin returned to his room that evening, match saved, she said they laughed and cried. “And we howled. It wasn’t an euphoric cry – that was after the Melbourne win in the second Test. That had a different feel. I had rarely seen him that light, that bouncy, that delirious. This was something different. We were howling. It was utter relief – a draining out of emotions from our system.”

Then, two minutes later, she wrote, he was gone, back to the physio’s room.