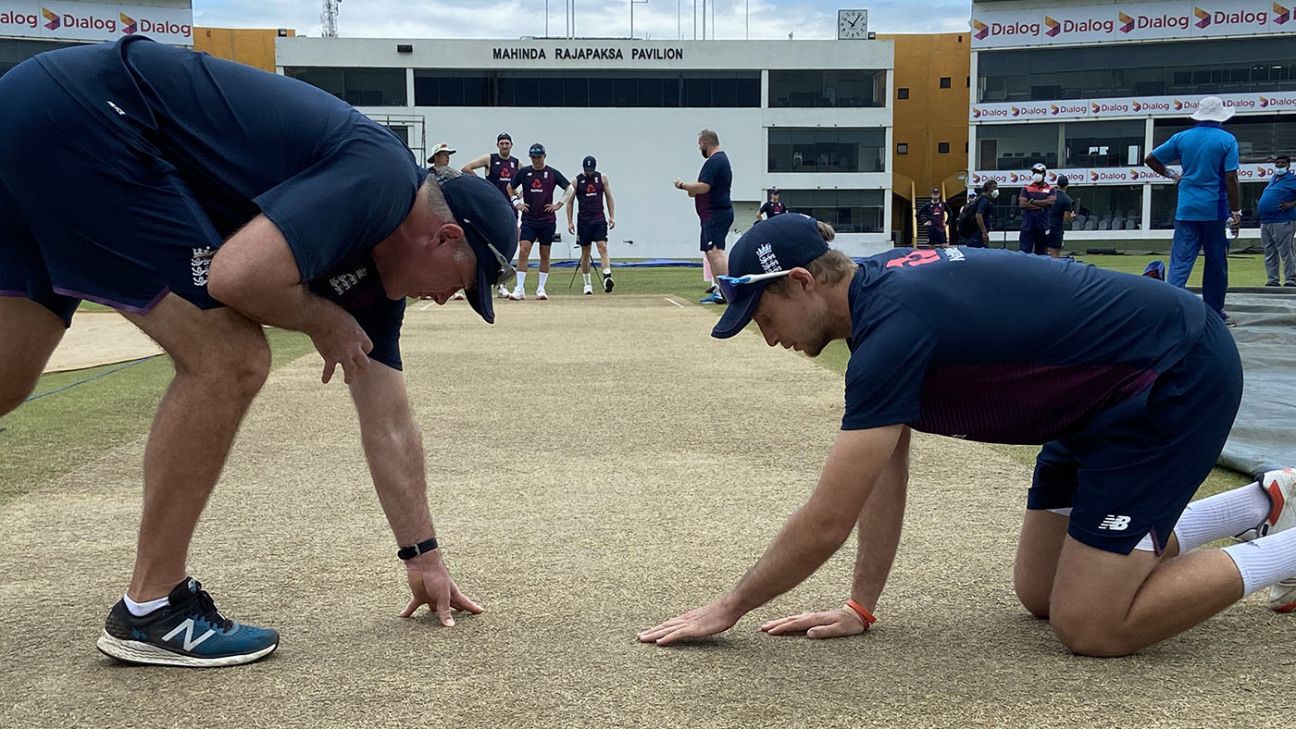 Joe Root has hinted that England will opt to field an extra seamer in the first Test of their series in Sri Lanka, rather than adding a third spinner to their attack.

Despite playing at Galle, a venue with a long-earned reputation for favouring spin bowling, England are set to select only two specialist spinners in Dom Bess and Jack Leach. They are likely to pick three seamers and turn to the part-time spin of Root and Dan Lawrence as required.

Ahead of the tour, it had seemed likely England that would pick three spinners in each Test. Since 2016, spinners have claimed twice as many wickets as seamers in Tests at Galle – the venue for both Tests in this series – and have done so at a lower overall average, strike rate and economy rate.

On England’s last tour to Sri Lanka, in late 2018, spin accounted for 100 wickets – the most ever in a three-Test series – while James Anderson and Stuart Broad claimed only one wicket between them. England used a three-man spin attack comprising Moeen Ali, Jack Leach and Adil Rashid in all three Tests, who claimed 48 wickets between them in a 3-0 win (Root’s offspin accounted for a 49th).

But illness and absence have reduced their options. Moeen, England’s joint leading wicket-taker with Leach on the last tour, has been ruled out of contention having contracted Covid-19, while Rashid has limited himself to limited-overs cricket as he comes to terms with a long-term shoulder problem. Other options, such as Liam Dawson, are also unavailable through injury.

That leaves England with three choices for third spinner. Although none of Matt Parkinson, Mason Crane and Amar Virdi are officially part of the Test squad at present, they are all part of the tour party as reserves and are considered to be available for selection.

“I don’t think it’s going to be miles away from what you’d expect a Galle wicket to play like, but if there’s weather around in the Test match and there’s a tacky nature to the pitch and it sweats with the covers on that probably brings seam into the game a bit more than it might normally do”

Root suggests the first Test will be a bowlers’ game

Only Crane has previously played Test cricket – he took 1 for 193 in Sydney at the start of 2018 – but he underwhelmed in the warm-up match (he conceded 37 from five overs, though he did dismiss Zak Crawley when he attempted to run a short ball to third man). Virdi didn’t bowl at all in that match, while Parkinson’s last first-class appearance was in September 2019. It is a situation which raises familiar questions about the lack of opportunities provided to developing spinners in the county game.

England’s options have been diminished further by the likely absence of two seam-bowling allrounders. Ben Stokes has been rested for this tour, while Chris Woakes was obliged to spend the first week of it in quarantine having been deemed a close contact of Moeen. As a result, Woakes was unable to participate in the warm-up game and may be considered a little short of match fitness in conditions which are expected to be hot and humid.

Those draining conditions – and the lack of the usual preparation time – might persuade England not to place too many demands on individual bowlers. And with Sri Lanka’s batsmen not always looking comfortable against pace, England are likely to want one of their quicker bowlers – Olly Stone or Mark Wood – alongside the allrounder, Sam Curran, and one of Broad or Anderson.

That means Root, who took his Test-best figures of 4 for 122 at Port Elizabeth at the start of 2020, may well be obliged to contribute with the ball, while Lawrence and, to a lesser extent, Dom Sibley provide further part-time options.

“I’ve readied myself for it [a role with the ball],” Root said. “I’ve prepared for it in practice and it does seem to be coming out OK at the moment. If it is the case that I need to bowl longer spells than previously and take a bigger workload in this series, then I’m looking forward to that challenge. It’s certainly an option and it will come down to the balance of the side.

“But the pitch does look very different here from memory to what it did on previous tours. I don’t think it’s going to be miles away from what you’d expect a Galle wicket to play like, but if there’s weather around in the Test match and there’s a tacky nature to the pitch and it sweats with the covers on that probably brings seam into the game a bit more than it might normally do. Everything is pointing towards it being a bowlers’ game.”

While Root will wait for another look at the pitch and the weather conditions before confirming his side – Galle has been hit by unseasonable rain in recent days – he did confirm he will bat at No. 4, with Jonny Bairstow at No. 3. He also said that Zak Crawley and Dom Sibley will open, and has previously confirmed that Jos Buttler will keep wicket.

While he acknowledged that England’s lack of preparation time – they go into the series having played just one day of warm-up cricket – is far from ideal, he knows they have to start well to have a hope of winning the two-match series. The fact that they’ve lost the first Test in five of their last six series is not lost on him.

“The preparations and build-up time is not ideal,” Root said. “There’s no point hiding behind the fact: we haven’t had the ideal lead-up to this series. It’s probably the shortest lead-up we’ve ever had going into an away Test match series. But regardless, it is about making sure we start the game well. So many times in these two-match series, it’s imperative you get off to a good start.

“It’s something we’re desperate to keep improving on. We’ve started series poorly, as was mentioned last summer, and if we are to keep improving as a team we can’t be behind the eight ball going into the second Test match of every series.

“The way we are going to do that is by scoring big first-innings runs and controlling the game. If we can manage to do that I think we’ll have success here.”