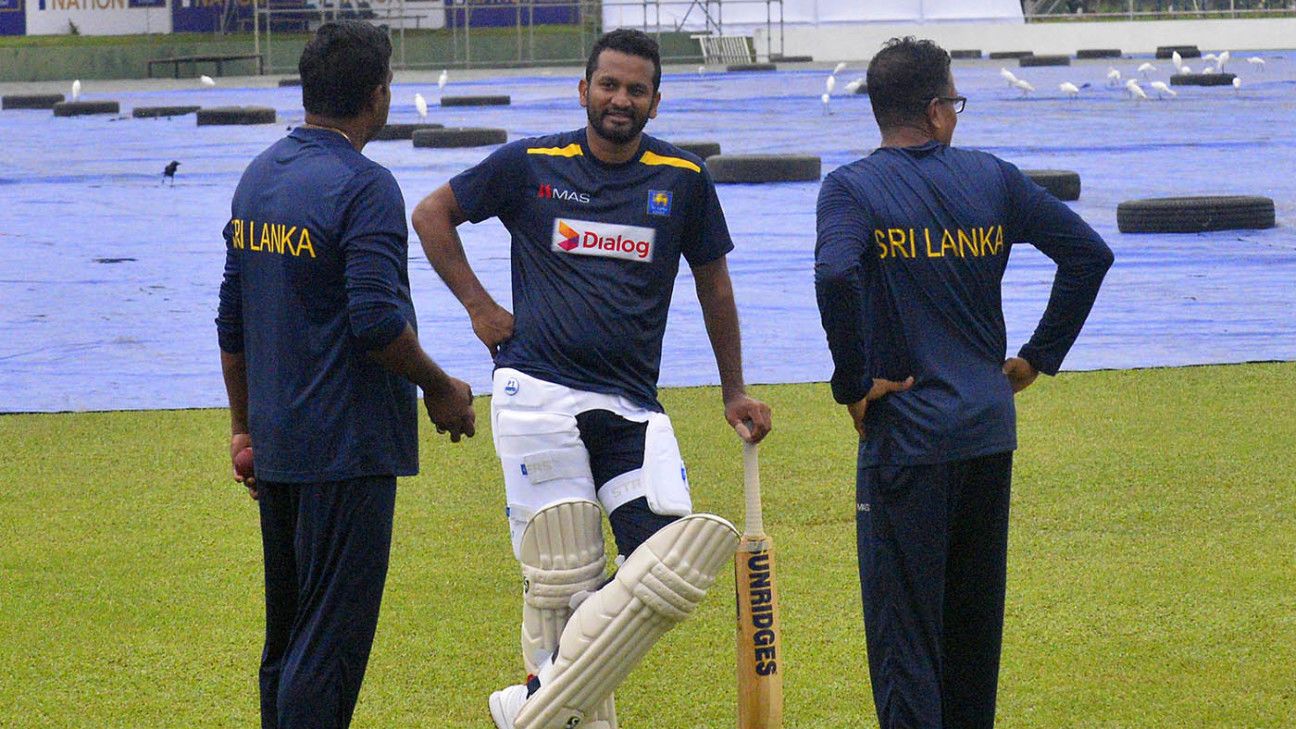 England rested Ben Stokes for this series, left Keaton Jennings out, and have lost Moeen Ali to Covid-19. Although Dimuth Karunaratne sympathises with Moeen in particular, he’s pretty sure all this confers an advantage to his team.

Although Karunaratne did not mention them by name, England have also left Ben Foakes out of the first Test, and have not brought Adil Rashid on tour. All five of these players had made a substantial impact during England’s 3-0 whitewash over Sri Lanka in 2018. Stokes had played both key innings, and bowled incisive spells; Jennings had hit a second-innings hundred in Galle, and taken outstanding close-in catches; Moeen had taken 18 wickets; Foakes had top-scored in the series in addition to having kept wicket extraordinarily well; and Rashid had turned the Colombo Test with his legspin.

The England side set to take the field on Thursday, however, has several players on their first Sri Lanka tour.

“We have a clear advantage against this team, because they’ve got a few new players,” Karunaratne said. “From the last series they played against us, Stokes is not in their squad and Jennings is not in the team. And Stokes is the guy who balanced their team. The players in the current squad don’t have much experience in these conditions.

“That said, we shouldn’t take it easy. They’ve prepared well, and I’ve seen how well they’ve prepared. They’ve also been playing cricket and they were the first ones to start playing Tests again after Covid hit. Their fitness levels are still up there. We only started again against South Africa, and because of the injury concerns, we’ve lost players.”

Despite the overall confidence, Karunaratne was still wary of the threat England’s spin attack posed. Left-arm spinner Jack Leach, England’s best bowler from the 2018 series will play again. He took 18 wickets at 21.38 on that trip. Offspinner Dom Bess, who has 19 wickets from 15 bowling innings so far, will also be in the XI.

“I think their spinners are just as dangeorous this time. Leach is there, and he’s the man who did a lot of of work in the last series here. It’s unfortunate that Moeen Ali, who did a good job, can’t play the series. Dom Bess has done a good job for England as well, so we never underestimate their bowlers. We always knew what they are capable of in their bowling lineup.

“But we know what the conditions are, so we have a few plans against them. They’d played a practice game here before the last series, and we have that footage and everything. We are trying to play our normal, fearless game. We learned a lot of things in the past series, and we’re not going to make those mistakes again.”

Sri Lanka’s batsmen, though, are playing a Test at home for the first time in 16 months, and have returned from South Africa only eight days ago, having played on fast, bouncy pitches there. Karunaratne does not think readjusting to home conditions will be too big a challenge, even if rain has hampered what little preparation time they had in the approach to this Test.

“Playing in Sri Lanka is difficult anyway, but we’ve all been playing in Sri Lanka since we started cricket, and I don’t think the fact that we’ve been abroad for a month will make it too difficult to come back to these conditions. Yes, we haven’t played for a while, but there was a domestic tournament last year as well as the LPL. We can’t give the excuse that we were playing in different conditions and found it hard to switch. These are our conditions.”