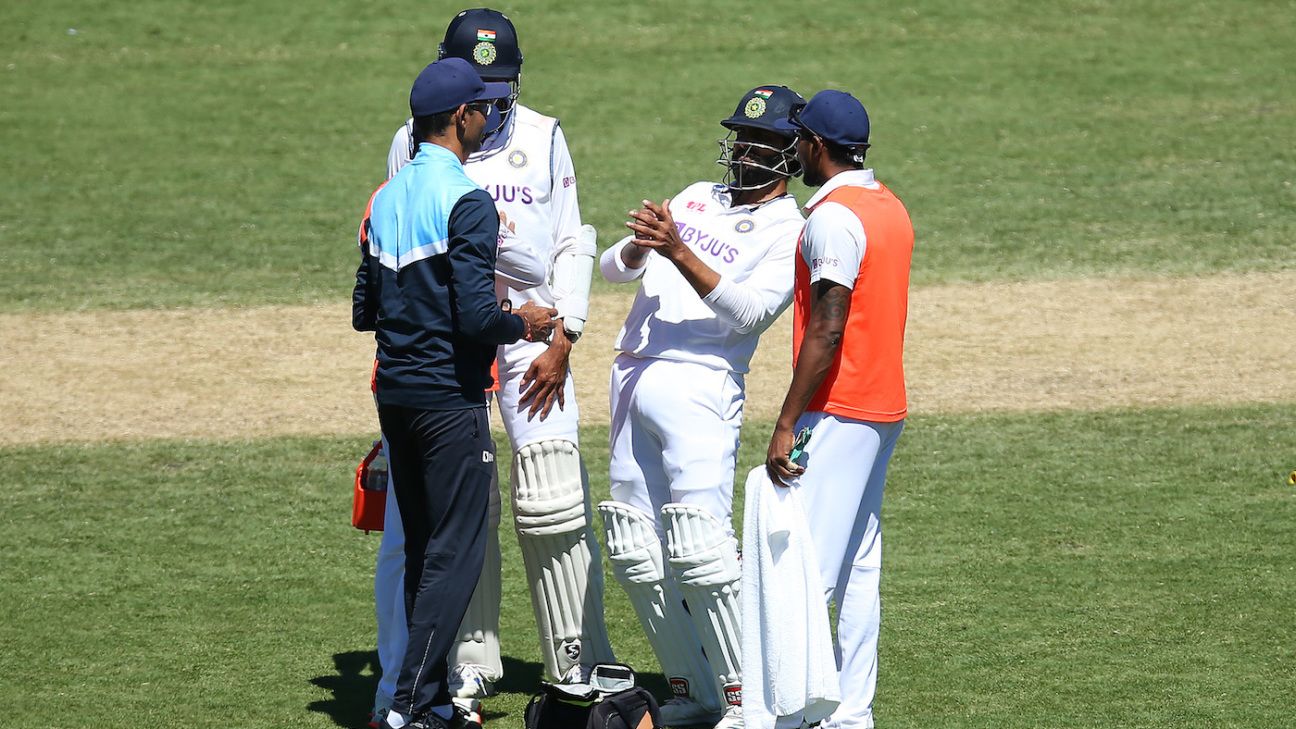 Ravindra Jadeja has joined the list of India’s walking wounded. The allrounder has been been ruled out of the fourth and final Test against Australia starting in Brisbane on January 15 and will instead be flying home to recover from a broken left thumb.

Jadeja sustained the injury during the first innings at the SCG but was still prepared to bat as the Test match reached its exciting conclusion. But that wasn’t necessary as India’s batsmen held off the Australian attack in incredible fashion.

A BCCI release on Monday said Jadeja will consult a hand specialist in Sydney and then continue his rehabilitation at the National Cricket Academy in Bangalore.

This is only the latest in an injury crisis that has hit the Indian team ever since they arrived on Australian shores. Even their most recent heroes – Hanuma Vihari (hamstring) and R Ashwin (back) – are serious doubts for the Gabba Test. Both players battled through pain to salvage a draw in the SCG Test when an Australian win looked likely. While there’s no official word on the duo yet, here’s a list of the injured India players

Hanuma Vihari: Vihari hurt his hamstring while batting during the fourth innings in Sydney. Along with Ashwin, Vihari batted through the entire final session to clinch a remarkable draw for India, despite not being able to run between the wickets, making a 161-ball 23.

R Ashwin: On Monday, the offspinner woke up with a “tweak” in his back that had left him in “unbelievable pain”, according to his wife Prithi on Twitter. Ashwin joined Vihari in the 89th over with more than a session left for India to save the SCG Test. But they rose to the challenge, batting out 42.4 overs, some of which included hostile short-pitched bowling. Ashwin looked in visible discomfort facing them, taking blows on his arms, chest and abdomen.

Ruled out of the tour:

Ravindra Jadeja: Jadeja suffered a dislocated left thumb on the third day in Sydney after a short ball from Mitchell Starc hit him on the gloves. He did not bowl in Australia’s second innings, but was seen padded up in the dressing room. He had earlier missed the T20I series with a concussion and a hamstring injury.

KL Rahul: Rahul was ruled out of the remainder of the Australia series with a sprained left wrist, having injured himself during India’s practice session at the MCG ahead of the third Test in Sydney. A BCCI release said that he would undergo rehabilitation at the National Cricket Academy (NCA) in Bengaluru and require “about three weeks’ time to recover completely and regain full strength”, which puts him in doubt for at least the start of India’s four-Test home series against England scheduled to begin on February 5 in Chennai.

Umesh Yadav: Yadav was ruled out of India’s last two Tests against Australia with a strained calf muscle. He felt it in the middle of his fourth over on the third day of the MCG Test, and took no further part in that game. He was replaced in the squad by Navdeep Saini, who was handed a debut at the SCG.

Mohammed Shami: The fast bowler suffered a fracture to his right forearm during the first Test in Adelaide and was ruled out of the remainder of the tour. Shami, who batted at No. 11, sustained the injury while fending at a short delivery from Pat Cummins during India’s second innings. After being taped on his right forearm Shami decided to bat on, but then signalled he could not continue and didn’t return to bowl in the fourth innings either.

Ishant Sharma: Ishant Sharma was not part of the original squad to Australia announced in late October after he sustained an abdominal muscle tear during the IPL. While he was expected to return to fitness in time for the Australia Tests, the BCCI said in a statement in November that Sharma still had to “build up his workload”, ruling him out of the tour.

Sruthi Ravindranath is a sub-editor at ESPNcricinfo