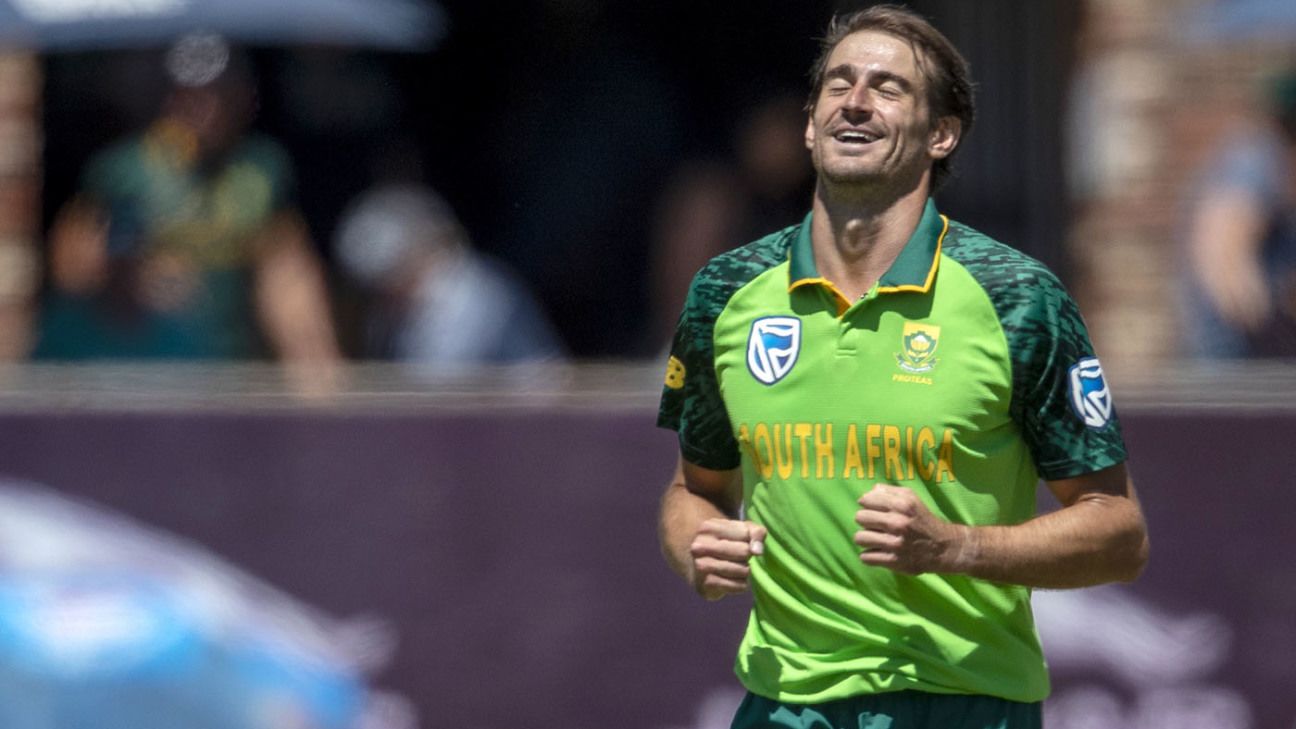 Glenton Stuurman and Migael Pretorius miss out through injury, as does Raynard van Tonder

Fast bowler Daryn Dupavillon and medium-pacer Ottniel Baartman have received maiden call-ups to South Africa’s Test squad for their historic two-match series in Pakistan. The trip will be South Africa’s first to Pakistan since 2007 and will take place in both a security and biosecure bubble.

South Africa’s squad features most of the same players that beat Sri Lanka 2-0 at home. Dupavillon and Baartman replace Glenton Stuurman and Migael Pretorius, who were suffered injuries in training during the Sri Lanka series and have not recovered in time to travel. Neither has top-order batsman Raynard van Tonder, whose spot has been taken by the returning Keegan Petersen.

The only additions to the group that were involved against Sri Lanka are in the spin department. Alongside Keshav Maharaj, South Africa have included George Linde, who played one Test in India in 2019, and Tabraiz Shamsi, who has two Test caps to his name. Shaun von Berg and Senuran Muthusamy, who are first and fourth on the first-class bowling charts this season, miss out.

In total, South Africa have given themselves nine pace-bowling options including two allrounders. Dwaine Pretorius, who did not feature against Sri Lanka as he recovered from a hamstring injury, has been given the green light to play as has Kagiso Rabada, who has been doing rehab after a groin strain. Anrich Nortje, Lungi Ngidi, Lutho Sipamla, Beuran Hendricks, Wiaan Mulder, Dupavillon and Baartman make up the rest of the seam pack.

“Considering that the conditions that will be faced are largely unknown to the South African team, we wanted to strengthen the attack with the skill sets that Tabraiz Shamsi and George Linde have to offer, while giving players like Daryn Dupavillon and Ottniel Baartman an opportunity after making strong cases for themselves in recent seasons,” Victor Mpitsang, South Africa’s convenor of selectors, said.

Dupavillon and Baartman are 14th and 28th on the first-class wicket-takers’ list and have leapfrogged the likes of left-armer Marco Jansen (in second place) and medium-fast bowler Lizaad Williams (who is fifth) but have impressed with big performances. Dupavillon, who debuted for South Africa in an ODI last summer, took 11 wickets for the Dolphins against the Knights while Baartman, who may seen as a replacement for Vernon Philander much in the way Stuurman was, has enjoyed an average in the low 20s over the last two seasons.

South Africa’s batting line-up is expected to be unchanged from the top six that did duty against Sri Lanka, which consisted of Aiden Markram, Dean Elgar, Rassie van der Dussen, Faf du Plessis, Quinton de Kock and Temba Bavuma. de Kock will continue to captain the team and keep wicket while Kyle Verreynne remains in the squad as cover. Sarel Erwee is the back-up opening batsmen with Petersen a reserve player.

The squad will leave South Africa next Friday on a commercial flight and will not be required to quarantine at home. Two of them, Shamsi and Baartman, will play in the domestic one-day cup, which starts on Saturday and is being staged in a biosecure environment in Potchefstroom.

The entire squad will have a period of quarantine on arrival in Pakistan before commencing training and an intra-squad match. South Africa’s two Tests will be played in Karachi and Rawalpindi before three T20s in Lahore. The T20 squad will be named at a later stage.