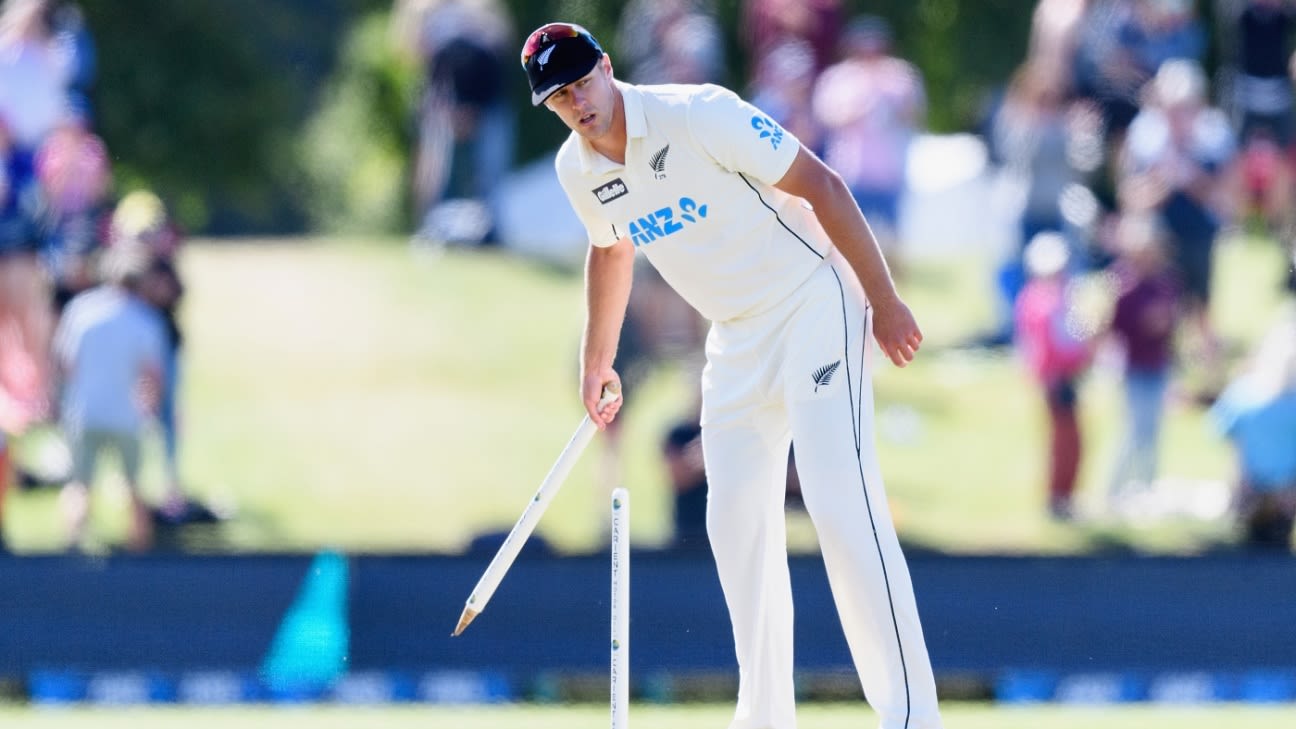 Everyone wanted a piece of Kyle Jamieson in New Zealand’s international home summer, with the Bay Oval crowd even standing up to sing ‘Happy birthday’ to him when he turned 26. While he had a dream first year in Test cricket, Jamieson also made his T20I debut this home summer, taking three wickets in four matches at an economy rate of 7.75. So, do the IPL franchises want a piece of Jamieson as well?

Gary Stead, who has overseen Jamieson’s progress from his domestic side Canterbury to the national team, reckoned that the presence of New Zealand coaches in the IPL might be “one of the advantages” for him. Brendon McCullum, the Kolkata Knight Riders head coach, and Stephen Fleming, the Chennai Super Kings head coach, have also commentated on the 6ft 8in quick for Spark Sport. Meanwhile, Mike Hesson, the former New Zealand coach, works with the Royal Challengers Bangalore as their team director.

“See, I’m not sure. Maybe they [the franchises] will [come knocking at his door] and maybe they won’t. Sometimes, it’s a bit of the luck of the draw with the IPL and how you get in there,” Stead said of Jamieson’s IPL prospects. “I guess one of the advantages is a few New Zealand coaches that are head coaches there as well that I’m sure have got their eye on Kyle as well as other people in our set-up as well.”

Earlier this season, Jamieson’s team-mate Tim Seifert, the wicketkeeper-opener, had also caught the attention of Fleming who told Spark Sport: “There’s a team in yellow [Chennai Super Kings] that might have a look at you as well. Not just Brendon’s [Brendon McCullum’s] team, there are other teams out there!”

Even before Jamieson made his T20I debut, Shane Bond, who is part of the Sydney Thunder and the Mumbai Indians backroom, foresaw an IPL opportunity for him.

Jamieson’s USP is his towering frame that enables him to bounce out batsmen, but he has shown that he can be just as threatening by pitching the ball up and swinging it both ways. In all T20 cricket, he holds the record for the fifth-best figures, having claimed 6 for 7 for Canterbury Kings against Auckland Aces in January 2019. All up, he has 49 wickets in 33 T20s at an average of 19.81 and economy rate of 7.96.

Jamieson said after the Christchurch Test that he had honed his inswinger during the winter, and the day after that game, Stead delivered a glowing appraisal of him, saying “the world could be his oyster”.

“I mean it’s just keeping him grounded as well. We all know he’s got some great attributes and some great skills and who knows the world could be oyster his with what’s ahead and what’s coming up,” Stead said. “But, at the end of the day, he’s still a cricketer and he’s one of our boys when he gets together with us and we treat him that way. He’s got everything there in front of him, but hopefully he stays fit and he will be a big part of New Zealand cricket I’m sure.”