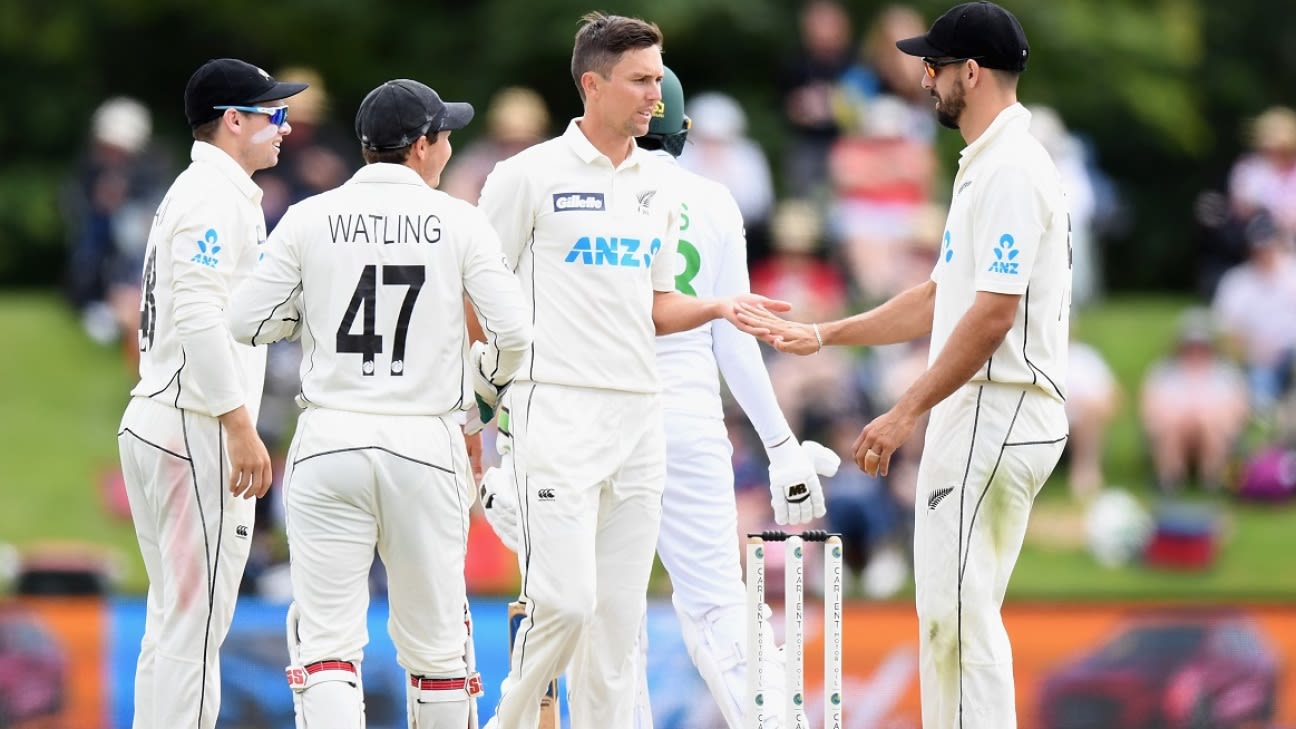 Pakistan are cornered and it is going to take something incredible for them to get out of this. New Zealand picked up two wickets, Pakistan’s run rate didn’t go anywhere, and on a surface where bowlers are always in the game, New Zealand would believe they won that first session hands down, as they try and take the series 2-0 to achieve the No. 1 Test ranking.

Resuming on 8 for 1, needing 354 more to make New Zealand bat again, Pakistan moved to 69 for 3 at lunch on day four. They lost nightwatchman Mohammad Abbas and opener Abid Ali in an engaging session where the ball did enough off the deck to test the inside edge, outside edge and their technique against deliveries that lift.

Azhar Ali, who made a stodgy 93 in the first innings, kept the fight going along with Haris Sohail, who is seeking to overturn a poor tour where his first three innings have yielded single-digit scores.

Abbas was the first to fall after being set up superbly by Trent Boult. Having played for the late inswing, trying to hide his bat from the ball, he played down the wrong line to one that straightened to nick off to BJ Watling. That wasn’t it, though. He even burnt a review despite there being an obvious sound as ball passed bat.

Azhar showed solidity and good technique against Boult and Southee, but the same level of confidence was lacking against Kyle Jamieson, who is enjoying a fantastic start to 2021, much like his initiation into Test cricket in 2020. Sure, his height helps him generate bounce and movement off helpful decks, but his biggest strength lies in being so consistent that even set batsmen begin to second-guess if their feet is in the right place while defending deliveries that rear awkwardly.

It’s this probing examination that troubled Azhar and Abid Ali in a 40-minute spell either side of drinks. Abid, in particular, was extremely edgy, cutting off his scoring completely, going through 20 balls without adding to his runs. He kept playing back to deliveries he could’ve looked to play forward and leave on the bounce. The stifling pressure and the itch to drive a delivery he thought was drivable got him to slice one to backward point where substitute Will Young, on for the injured Henry Nicholls, threw himself to his right to pull off a one-handed grab. This left Pakistan properly wobbly at 46 for 3.

There was no let up in intensity at any stage from New Zealand. Daryl Mitchell, fresh off a century and picked also for his bowling, generated enough nip off the deck to ensure the batsmen could only switch off at their own peril. In the last over before lunch, he went around the wicket and adopted Neil Wagner’s approach of bowling short-short-short on the ribs from around the stumps and nearly had Azhar in his leg-side trap, with the ball just falling short of Southee at leg gully.

Haris has so far looked largely organised and even played a lovely off-drive off Boult, showing the full face of his sponsorless bat, to give glimpses of his strokeplay. But then, that has never been in doubt, has it? It’s his set up at the crease and his technique against the swinging ball that have been scrutinized. Here’s an opportunity to bat, bat and bat. And redeem himself at the end of what has been a forgettable tour so far.